In the 1880's a easy to use bicycle, the ancestor of modern bikes, was invented in England and became enormously popular.

In the early 1800’s the bicyclettees was invented in France. It had a fixed front wheel and was rather primitive. In 1817, a German invented a way to steer the wooden bike. In France in 1860, the bike had advanced to pedals and cranks to the front wheel. The bike did not have spokes on the wheels, the bike was very difficult on the back and was called the boneshaker. In the next few decades, spokes were added to the wheels to distribute the shock sideway, brakes, chins and pneumatic tires were invented.

In the 1870’s a new type of bicycle from England called the Ordinary became somewhat popular in the United States. The bike had a 5 foot high front wheel and an 18 inch rear wheel. To just get up on the bike was a challenge and it was easy to fall off. The bike was very difficult to master and really only appealed to young, daring men.

In the 1870’s and 1880’s other types of bicycles were invented. Some have more than 2 wheels, 2 or more seats or different sized wheels, but not really caught on. They were too difficult for the average person to operate.

But in 1885, the English came up with a better bike, the Safety. The bike had 2 smaller wheels, that were the same size. This is basically the modern bike, which was much easier to operate, lighter and could be mastered quickly. The bike was an overnight success.

In the 1890’s, about 10 million people learned to ride their Safety Bikes. That is about 1 in 4 Americans, That statistic is still pretty accurate for today, but you need to keep in mind that many of the bicycles today are owned by children. Back in the 1890’s bicycle were pretty expensive and it was more of an adult activity. The average price for a bicycle was 100 dollars, in today’s money that is over 2,300 dollars.

Women in long skirts could easily ride the Safety, especially if they raised their hems a little, which many women did. Some were scandalized by this, but it did not stop the fad.  An unexpected outcome from bicycles is that it increased women’s freedom. They could easily travel where they wanted and courtship was easier away from the eye of their parents.

courting on the safety bike

Hundreds of cycling clubs quickly sprang up all over the country and they sponsored tours for their members. The tours very popular with courting couples. Even after the first fad waned, bikes were still ridden by many. They were cheap, practical transportation. The price of the bikes steadily decreased and more children started getting bikes. Schwinn kid’s bikes appear in 1933 and grew in popularity. 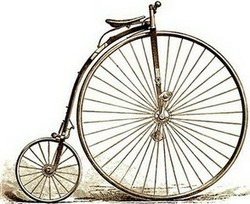 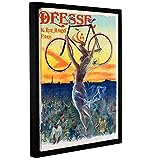