The One Touch hands-free can opener has been featured on shopping shows, TV ads, and magazines. If you wonder if it really works, learn about my experience.

About My Experience with the One Touch Hands-Free Can Opener

In my kitchen, I use a manual can opener. I like the simplicity and the fact that it takes up only a small amount of drawer space. In addition, I find it frustration free as it never breaks down. However, I found myself on the hunt for a can opener a few months ago, because my 84 year old mother who has significant arthritis was having difficulty using even her electric can opener.

I had seen the One Touch can opener advertised in magazines, but assumed it was a novelty or perhaps one of those cheap products that doesn't perform the intended job very well. It wasn't on my list of possibilities.  I visited medical equipment stores, kitchen gadget stores, and shopped online.

During my search, I bought and had my mother try four different devices . For my mother, we found that operating a manual can opener wasn't a possibility. She could not puncture the can nor twist the knob due to her arthritis and the small tremor that she has. With the electric models, she had difficulty placing the can and puncturing it.

Finally, I brought home the One Touch hands-free can opener.

The One Touch can opener operates on two AA batteries, which we had to purchase separately.  Personally, I would prefer a rechargeable device, but we opted for some rechargeable batteries to help keep the ongoing cost down.

The included instructions were simple and easily guided us in removing the battery cover although the print was quite small. The physical demands of removing the battery cover and inserting batteries is the hardest part of using this device. You have to grip the back half of the device and squeeze hard to slide it back and upward to reveal the battery compartment. The process of opening it is not something my mother will be able to do, but this wasn't a deal breaker for us since family members are around enough to do it for her as needed. For a person with normal dexterity and strength, it would pose no problem.

Probably the most valuable attribute of this device for my mother, is the fact that it is easily slides into place and doesn't require you to puncture the can manually. The cutter sits under a raised lip on the bottom. She merely has to set the can opener on top of the can and slide it back until it hits the lip and cutter. Once this is done, she can release the can opener and press the large button on top. It doesn't require the coordination of performing two physical movements at once and very, very little strength is needed. It also doesn't require fine motor movements, which are difficult for her.

On her first try, it shut off immediately. However, when she pushed the button a second time, she held it for a fraction of a second versus just tapping it, and it ran until the job was complete.

It was a bit slower than the average electric can opener and it was somewhat loud as well. The cut was just below the lid, therefore, the lid did not fall into the can and it's contents. The lid stayed attached at the final point, but she was able to easily remove the can opener, empty the can, and discard it with the lid still attached.

My mother has been using the One Touch can opener for a few weeks now and has no difficulty using it. For her, it has been a good solution.

The Advantages and Disadvantages

The One Touch hands-free can opener is one of the smallest can openers you can find, so it's perfect when you have limited space. It's also simple to operate, so for kids, or for people who have coordination or strength problems, it should also be a good choice.

On the other hand, it's rather loud and it's not very fast, so for some people it might not be as desirable.  If you prefer a can opener that will completely cut the lid and remove it by utilizing a magnet, this isn't the right choice either.

The unknown regarding the One Touch is longevity.  Only time will tell how long it will operate on a set of batteries and how long the device will continue functioning.  I will update my review of it in the coming months for this reason.

However, for anyone who has difficulty using traditional can openers, I would certanly recommend giving this product a try.

See It in Action

getting at the batteries is a bear. If I wasn't able to open cans the normal way, once the batteries ran out, and they do, fairly fast, the thing would be useless.

My sister sent me one a few years back. I guess she thought once I reached 70 or so, I was falling apart. The thing works fine, but as you said, getting at the batteries is a bear. If I wasn't able to open cans the normal way, once the batteries ran out, and they do, fairly fast, the thing would be useless. So unless there's an easier way to open the battery compartment, it is useless for someone living alone.

I stored it away for some time when I might actually need it. I'm not going to spend money on replacement batteries just for convenience' sake.

Also, the way it cuts the top off, it leaves a very sharp, dangerous edge.

Hmm.... I have one of those magnets on a stick, almost like a pencil eraser... Could be, light weight enough to resolve the magnet taking lid off snag...

Have been looking for something like this for ages, Thanks

Wow! I had no idea these existed. Thanks for the info!

I've used mine for more than two and a half years--it's great.
Unfortunately it leaves a sharp edge on the can--not really a problem-be careful

This would make a great gift for an elderly person. Good review.

That is very cool. I wish I could simply find a can opener that lasts longer than a couple of months.

I'm crazy about my EasiYo Yogurt Maker! I love yogurt but was always running ...

I love to use a one touch milk frother to easily make delicious coffee, chai or gourmet hot chocolate.
100%  18   10 KathleenDuffy
Kitchen Appliances & Gadgets 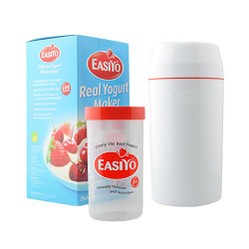 I'm crazy about my EasiYo Yogurt Maker! I love yogurt but was always running out. However, this fabulous device means I have it on hand all the time. And its delicious too!
Loading ...
Error!