You don't have to sign up for a subscription package. Just click a button, pay your rental fee and you're good to go with all the top movies and latest TV seasons.

As a teenager, watching movies is what we did.

Every Saturday night, we would rent a couple of films (usually chosen around the best-looking actors, naturally) and pile into my front room to enjoy our double bill.

If the internet had been around back then, we would not have been down the video shop. We'd have been crowded around the choices on Amazon Instant Video, probably selecting movies which weren't even out in the theaters yet.

Amazon Instant Video is Only for the USA

I even had the popcorn cooked and ready. Unfortunately I'm way too British.

I wish I was American.

It's not often that I even consider that, given that I live in a beautiful part of the world, surrounded by my friends and family.  But Britain doesn't have Amazon Instant Video, as I found out to my cost.

I'd carefully selected precisely the movie that I wanted to watch.  Then I'd decamped into the kitchen for proper film-watching food.  Perfectly prepared, with my munchies spread out on the desk before me, I reached my mouse into Amazon and pressed play.

"Sod off, you red-coat limey!  This will teach you to demand taxation without representation and burn down Fort McHenry!" It screamed back at me.

Well, I'm paraphrasing. The actual error message was this:

Naturally I was a little put out, as I'd already lined up the next ten things that I wanted to see!  I'd spent half an hour browsing the lists and adding things to my watch list!

(That's a kind of holding page, or wishlist, so you can easily find them again later.  When you buy them, they move into your Amazon Video Library instead.)

I did what anyone would do in these circumstances.  I contacted an American friend, then got her to rent the video and watch it with me, via a live streaming video platform.  It seemed a little cheaper than relocating to the States and giving up my British citizenship.

I'm not sure that the movie would be worth the loss of a nice cup of tea.  But the Amazon service certainly looked very attractive.

It also demonstrated just how much clout the company has in the entertainment world.  I was looking through Today's Deals, which offer desirable titles at bargain prices, as long as you get in there fast enough.

I was also staring at something which stunned me.  You could watch DVDs of movies which hadn't yet made it into the theaters!

These films aren't even in the theaters yet, but you can watch them before all of your friends via Amazon.

A Wide Selection of Movies for Rent on Amazon

I had ten of them lined up. If I wasn't so British, they'd be in my watch list by now!

The main thing that really impressed me was the sheer range of films on offer.

After a few minutes, I started to challenge it not to have any movie that I could name.  It didn't fail me.  (Well, apart from the whole being able to actually watch them thing.  Ok!  Ok!  I'm over it now. Last mention over.)

Can it beat you?

Once I'd got bored of challenging it, I went for some serious movie choosing. The range can be quite overwhelming, so I went for the expedient ploy of searching for a film which I know that I enjoyed. Then I checked out the 'customers who bought this item also bought' section underneath.

That's when I found documentary movies that I hadn't even heard about before. I made half of my selections from there.

The fact is that you don't always want to buy a whole DVD for a movie that you'll only watch once or twice. You only have to store them, or give them away, or else they are just sitting there collecting dust.

Amazon Instant Video offers a middle ground. More films than you'd ever be able to slot into a physical video library, but cheaper than going to a theater. Happy days!

There are films, documentaries and TV shows in every genre. Whatever you like is bound to be there.

Keep Up-to-Date with the Latest TV Shows - Without Commercials!

I know someone who has disdained the television entirely, in order to watch Dr Who: Season 7 on Amazon Instant Video.

He could enjoy it free of charge, but the action stops every few minutes for yet another commercial. By the time he's finished scowling his way through 'buy this hair-dryer' and 'zOMG! This deodorant will make EVERYONE love you', he'd half forgotten what was happening in the show.

He opted instead for parting with $1.99 per episode to watch Dr Who in one continuous stream.  It makes him happy.

It's not just Dr Who either.  There are hundreds of TV shows there.  Downton Abbey is obviously topping that list, though Breaking Bad isn't far behind.

Rent each episode to watch them when and where you want, without advertizements interrupting your enjoyment.

Watch your Movies and Shows on a Variety of Devices

As a partially deaf woman, I wanted mine streamed on my computer. I can use headphones then. It was one of the options.

Another really cool thing about Amazon's service is that you're not restricted as to where and how you watch your rental.

It can be streamed on your computer; downloaded for watching off-line; transferred to your television; or shown on a range of devices from iPad to XBox.  There are some provisos concerning High Definition videos, but that's about it.  The full range is given on the Getting Started page.

Amazon Instant Video would suit those who only occasionally want to watch things.  It's a kind of pay as you go service.

If you were going to make a regular habit of this, then you're straying into the realms of Amazon Prime or Netflix.  Annual subscriptions there mean watching movies and TV shows for free.  (Give or take the cash that you parted with for the subscription itself.)

But Amazon Instant Video is perfect for those moments when you really want to see something, but don't crave it enough to buy the actual DVD.  You could even consider this a trial run and, if it's good enough, purchase your own physical copy later.

LOL Yes, you do that. There has to be some kind of background deal. I bet Amazon has shares in a film company somewhere. They're cutting out the middle men (theaters) in showing the movies. That's pure speculation by the way.

LOL you talked about Dr. Who in the article and it didn't even register as a British show for me! XD

I'm still amazed that you can stream a movie that isn't in theaters yet. It makes me wonder what the heck is up with Hollywood that they'd do that. I'll let you know when that stops both boggling and amazing me.

Thank you, Ember, for this extremely thorough commendation from someone who actually uses the service. <3

Hulu doesn't work in Britain either. :( I know someone who uses Netflix, so that may work here.

There are plenty of British shows on Amazon Instant Video. Downton Abbey for a start, not to mention Dr Who. I think that if Amazon stocks it, it's there.

I have NO idea how they've managed to get movies before they're in the cinema. It just shows the power of the company! Look up Amazon Instant Video > Movies > Special Release: Movies. They're all in there.

And wait wait wait, how on earth does watching a movie that hasn't been released in theaters work? Is that for real? That is insane.

I could not agree more with the entirety of this article. Yes. More people need to know about Amazon instant video, because it really is amazing.

We do that here, all gathering to watch movies in the evenings, except for us it is a choice between Amazon, Hulu, and Netflix. In general, Amazon and Netflix are better for movie watching where Hulu is better for TV show watching, but we don't pay for cable.

But in truth, since adding Amazon plus to the Xbox and Play Station, Nexflix has been on the out. It just isn't nearly as good as it used to be. There truly is an immensely better selection for movies on Amazon, as you pointed out. And, when it comes to movies that you have to pay for to stream, again the selection is as good as what Block Buster used to be when they still existed >.>, and way way way better than the selection at any Red Box ever, and is still cheaper than a rental, or even PPV. So, it is very worth it.

Also, and who the heck knows why, it streams a lot better than Netflix as well...at least at our place. I really don't know what took us so long to figure Amazon movies out. The play station comes with the icon already there! You just actually have to click on it and follow the incredibly fool-proof guide they give you to syncing your Amazon account on your computer to the one on your gaming system, and taadaaa movie time! (I just did this a couple weeks ago.) :D

Now, onto Amazon's tv show competition- I can't tell you how great that is, that if you pay you don't have commercials! I wasn't aware of that. That is really amazing. On Hulu, if you pay like 9 bucks a month, you still get like a million more commercials than you do on television!!!!! It is immensely annoying. I thought that by paying for Hulu Plus instead of using the free one there would be less commercials. There are just as many. There is no point in paying for Hulu (except that they'll let you stream on devices that aren't a computer, but Amazon let us stream from the gaming system/TV with no extra fees, so yeah. >.<). Do not pay for Hulu Plus. Just use Amazon.

I do wonder though...If it won't stream in Britain, can I watch British shows on it?

Kudos to discovering it! For people who use things like this all the time, it did take us a while XD

ps- If you'd like you can use my Amazon Plus anytime, if logging in with a US account is all you need to make it work. 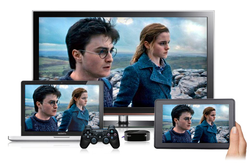