Ambrose Gwinnett Bierce was an American journalist, editor and satirist. He was born in 1842 in Ohio. He grew up loving books and after leaving school at 15, went to work in the typesetting room at an Ohio newspaper. He fought for the Union during the Civil War, then went West with as part of a military expedition. He ended up in San Francisco, where he stayed after he resigned from the army.

Bierce worked as a contributor and editor in San Francisco, including as a crime reporter. Eventually he moved to England and lived there for 3 years in the 1870’s. Returning to the US, he traveled in the American West before once again becoming a journalist in San Francisco, he eventually became a prominent columnist for the San Francisco Examiner.

Bierce used his war experiences to write about the war, most prominently in An Occurrence At Owl Creek Bridge. But his most famous work was The Devil’s Dictionary which had started out as a feature of his column. The definitions were sharp satire and very popular. Some of the examples are listed below.

In 1913, Bierce was determined to visit Mexico and visit Pancho Villa. He disappeared after Christmas, while traveling in Mexico. His disappearance attracted intense interest. Stories are that he committed suicide or that he was executed by firing squad. But there is no hard evidence either way and his death remains a mystery.

SOME OF BIERCE'S CYNICAL DEFINITIONS

Adam’s Apple, n. A protuberance in the throat of man, thoughtfully provided by Nature to keep the rope in place.

Affectionate, adj. Addicted to being a nuisance. The most affectionate creature in the world is a wet dog.

ardor, n. The quality that distinguishes love without knowledge.

bachelor, n. A man whom women are still sampling.

bequeath, v.t. To generously give to another that which can no longer be denied to somebody.

betrothed, p.p. The condition of a man and woman who, pleasing to one another and objectionable to their friends, are anxious to propitiate society by becoming unendurable to each other.

biography, n. The literary tribute that a little man pays to a big one.

circumlocution, n. A literary trick whereby the writer who has nothing to say breaks it gently to the reader.

coquette, n. A vain, foolish and stupid girl who after a pretty thorough sampling of oneself prefers another.

coroner, n. A municipal officer charged with the duty of cutting up the unfortunate to see if they are dead. They always are.

courtship, n. The timid sipping of two thirsty souls from a goblet which both can easily drain but neither replenish.

dandle, v.t. To set an unresisting child upon one’s knee and jolt its teeth loose in a transport of affection. A grown girl may be similarly outraged, but her teeth being more firmly secure, there can be no object in doing so.

defendant, n. In law, an obliging person who devotes his time and character to preserving property for his lawyer.

dentist, n. A prestidigitator, who puts metal into your mouth and pulls coins out of your pocket.

deposit, n. A charitable contribution to the support of a bank.

depraved, p.p. The moral condition of a gentleman who holds the opposite opinion.

desertion, n. An aversion to fighting, as exhibited by abandoning an army or a wife.

divorce, n. A resumption of diplomatic relations and rectification of boundaries.

fault, n. One of my offenses, as distinguished from one of yours, the latter being crimes.

forbidden, p.p. Invested with a new and irresistible charm.

governor, n. An aspirant to the United States Senate. 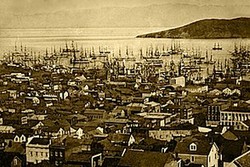