I ordered this dinner entree when my family and I dined at Applebee's the other night. Read to find out what I thought of it.

Product Description: Applebee's menu item consisting of a 9-ounce sirloin steak with grilled shrimp and covered in a layer of melted Parmesan cheese. I ordered mine with a side of seasonal vegetables and garlic mashed potatoes for $16.99 (plus my drink) when I took my family out for dinner this past weekend.

Not as Good as I Was Expecting

My family and I don't eat at Applebee's very often, maybe once every 3 months or so, depending on whether we have the money or a gift card. So, when we do go, it is a special treat, especially since my daughters like it there.

This past weekend, I decided to use the money my boss gave me as a Christmas gift to take the family out for dinner and, since my daughters insisted, we picked Applebee's. Normally, in an effort to keep costs down, I typically will stick with one of their burgers. However, since we were having dinner on someone else's dime, I decided to splurge a bit and ordered the Shrimp N' Parmesan sirloin. 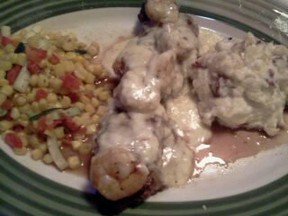 This was actually not the first time I have ordered this particular menu item. I've had it in the past, a long time ago, and thought it was decent. However, either because of a recipe change or the particular Applebee's we ate at, it just wasn't as good as I was expecting it to be when I ordered it this past weekend.

To be fair, things didn't exactly get off to a good start when I ordered the steak well done and it came out looking pretty darned pink (my wife ordered her steak medium rare and it had a lot less pink inside of it). However, I'm also not overly picky about that (as long as it isn't bleeding, I'll eat it), and did not base my final opinion on that kitchen mistake.

Instead, I was very unimpressed by the flavor. The Parmesan cheese had a good taste to it, as well as the shrimp. However, it was hard to tell that because the steak had way too much pepper on it. I don't mind pepper normally. But, it shouldn't be the only thing I taste when I eat something like that. So, despite the fact the steak was tender (I'll give the restaurant credit for that), I really didn't enjoy it as much as I thought I would.

Another complaint I had about this menu item is the fact I didn't have any leftovers. This, again, seems to be a change from the last time I ordered this particular entree because I do remember having enough left for more than one meal (and the plate did look a little emptier than I was expecting it to be when I got it). I know this isn't as big of a deal for most people. But, I've been a bit spoiled over the years and am used to getting large portions of food from most of our local restaurants. So, the fact I didn't have leftovers from a restaurant that is considerably more expensive did make me question whether or not I spent my gifted money wisely.

In all honesty, the steak wasn't awful and I did finish my dinner. But, compared to what I have gotten from this restaurant in the past, I do have to say I was somewhat disappointed by both the quantity and overall flavor of this entree, especially since I did pay quite a bit more for it than I would at most of our local steak restaurants. I probably will eat at Applebee's again. But, I'm going to think twice about ordering this menu item again. 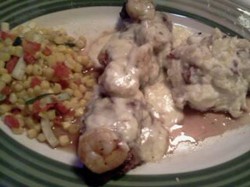 I purchased this product this past weekend and had it for lunch. Read to find out if I got my money's worth.
75%  1   11 StevenHelmer
Other Food & Cooking