I purchased this product this past weekend and had it for lunch. Read to find out if I got my money's worth.

Product Description: Frozen lasagna dinner for one from the Marie Callender’s brand. The lasagna advertises Italian sausage, pepperoni and beef along with ricotta, Parmesan, mozzarella and Romano cheese. I purchased one of these at one of our local grocery stores on Sunday for $4.47 and cooked it in the microwave when I got home so I could have it for lunch. 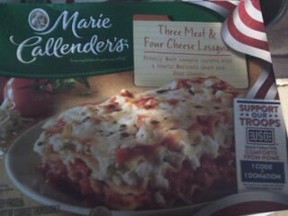 I don’t normally purchase the Marie Callender’s brand because it is kind of expensive and, even though the food is decent, it is rarely worth spending the extra money on it. However, I had spent most of my morning helping my parents move into their new house and, by the time I made it to the store, was getting very hungry. This product happened to be on sale and looked like it would be something somewhat different from the average frozen dinner so I decided to give it a try. As it turned out, it was well worth my money.

One thing I liked about this product right away was the size. I’ve purchased other lasagna dinners for one and am usually disappointed by the quantity. Either they are really thin or, if they do have some thickness to them, come in a smaller container. This lasagna dinner had the best of both worlds. It was a larger package and the lasagna was more than one layer.

As far as taste goes, this definitely exceeded my expectations. It wasn’t quite as good as homemade. But, it was full of flavor. The meat gave it a bit of a spicy taste. But, it wasn’t anything that was over the top and I definitely appreciated having that rather than the bland taste I’m so used to getting with pre-processed frozen dinners like this.

Mostly because of the size and partly because of the various meats and cheeses, the lasagna also proved to be filling. This, again, isn’t the case with many other frozen dinners like this and, since I was starving, was something I definitely appreciated. In fact, I was actually a bit surprised it filled me up so much and that, by itself, probably would have made this worth the extra money I spent on it. The great flavor was just a bonus.

Again, this isn’t a brand I purchase very often. However, I would definitely consider buying this particular product again, even if I wasn’t able to find it on sale and had to pay full price for it. I do recommend trying it if you have an opportunity to.

StevenHelmer, Thank you for the practical information, pretty picture and product line.
Would the A-grade dinners, such as the Callender lasagna above, come out with perhaps A+ marks in the midst of appealing side dishes or with the addition of flavorful, fresh ingredients?