A virtual tour of Bath, England. Want to know the top spots to visit and what to read beforehand? Come and find out.

Planning a Visit to Bath?

Are you planning a visit to Bath? Or maybe you'd just like to find out more about this historic Georgian city. We should call it Bath Spa to give it its full name. Bath Spa is in the county of Somerset, England, UK.

I lived in Bath for 10 years and still return to visit. It's one of my favorite cities and I love going to stay there.

Bath is famous for it's Georgian architecture which creates a wonderful backdrop, but it's a modern city now, I love the street performers who make the city so full of life.

In the South of England

The railway station is quite central

Shall we Take a Tour of Bath?

Don't worry it only takes 2 minutes

The public Baths from Roman times have become modern attractions and you can bathe at the Thermae Spa or visit the Roman Baths Museum.

Much of the city was built up during Georgian times. The architects John Wood the elder and John Wood the younger designed many of the buildings.

The Royal Crescent is particularly famous and very impressive. The crescent is a curved terrace of tall houses. Many have been turned into flats now as it's pretty expensive to own a whole house in the crescent!

And of course Jane Austen lived in Bath for several years in the early 1800s. She is one of the most famous residents of Bath and there's a Jane Austen museum to visit.

Bath is now a thriving modern city. It's architectural heritage has been protected much better than many British cities. Make sure you look up as you walk around the city. The shop fronts at ground level may be modern but you'll often see some amazing georgian architecture if you look up.

Today Bath is known for:

Bath is small for a city, you can easily walk between the main attractions if you're fit and healthy.  Otherwise there are taxis around and a bus service. Don't drive! There's hardly anywhere to park. There is a Park and Ride service where you can park outside of Bath and get a bus in.

If you're visiting Bath why not read up about the city beforehand so you can make the most of your visit.

Have You Visited Bath, England?

I Hope You Enjoyed Bath, England

If you're planning a trip to the UK, then Bath certainly deserves a place on your itenerary. The city is very popular with tourists and has lots of interesting attractions. And Bath has wonderful restaurants too, there are lots of lovely places to eat. Now I need to plan a trip to Bath!

Things to Do in Bath

Things to Do in Bath

I love Bath- I've been loads of time. One of my fav cities in the world.

I enjoyed this virtual tour of Bath, England a lot! It was the perfect diversion from a cold New England day.

Interesting! I don't think that I visited Bath when I went to England last (I was pretty young), but I do seem to remember that there was one of the old baths in a town I stayed in. 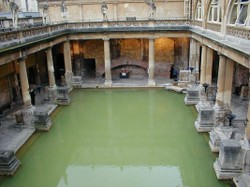