Iron Man is an awesome character to dress up as. Tony Stark is a genius, billionaire with a house full of cool toys and a powered suit that enables him to fly and fight crime.

In The Avenger 2012 movie (aka Avengers Assemble) Tony Stark gets called back to the Avengers Initiative to help save the world from a power hungry Loki.

Stark wears his, just about ready, Mark VII Iron Man suit in the movie and the Avengers Iron Man costume for kids is based on this costume. (Careful there are lots of other Iron Man costumes around.)

This is the Light-up version of the Iron Man VII costume.

The Arc Reactor in Tony Stark's chest is a key part of the costume. It keeps Stark alive. In this costume the Arc Reactor lights like the movie one.

This is a jumpsuit costume with a padded muscle suit and lots of costume details built in.

You also get the Iron Man mask.

Now these are cool!

In The Avengers movie, Tony Stark puts on power bands in a scene with Loki (the main enemy of the movie.)

They even have light and sound effects, and you do get a pair of them.

Does not light up

This is the Mark VII Iron Man costume for kids which ties in with The Avengers 2012 movie.

This version does not have a light up Arc Reactor which makes it a cheaper option.

It does include the jumpsuit and mask.

There are role play accessories that you can add to complete your Avengers Iron Man costume.

You can finish off an Iron Man Mark VII kids costume with a pair of matching gloves.

Tony Stark is the billionaire owner of Stark Industries. He's also a genious. He has invented lots of technology.

Stark sustained an injury which means he would die without the Arc Reactor in his chest.

Stark has built himself a series of powered suits that allow him to turn into a crime fighting superhero.

In an Iron Man suit Tony Stark is able to fly and has awesome weapons when he needs them.

In The Avengers movie Stark has to use his latest (and not quite ready!) Mark 7 suit to defend the earth against Loki (he's Thor's adopted brother.)

The Tri-power Repulsor attaches to the underside of a child's arm (age 5+) with velcro straps. It shoots projectiles a long way.

The Tri-power Repulsor also has light and sound effects.

You can also get an Avengers Iron Mark electronic mask toy. The costumes do include a basic mask, but this is a fancier one with special effects.

And you can also get a separate light-up Arc Reactor toy that can be clipped on to clothes.

Do you know a kid who would like an Avengers Iron Man Costume?

Avengers are a great costume choice for kids. My daughter love Iron Man. She got an Iron man sweatshirt and is wearing it to school today. 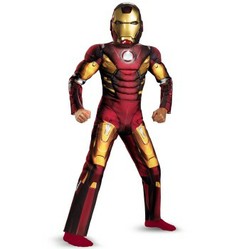 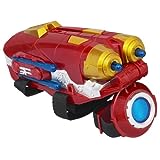