The Avengers Black Widow costume for kids. Girls can dress up as Natasha Romanov and help save the earth from Loki and his alien army!

Natasha Romanov is played by Scarlett Johanson in the summer 2012 movie The Avengers (also known as Avengers Assemble.)

Natasha is the superhero Black Widow. She's a spy and highly trained in combat.

Natasha wears a distinctive black catsuit. Her outfit in the Avengers has a buckle with red detail (which appears in the costume.)

The costume comes in sizes for preschoolers, little kids and big kids up to tweens or pre-teens.

The is the official The Avengers Black Widow costume for kids.

The main part of the costume is of course the black jumpsuit.

You also get a pair of spider cuffs - Black Widow can use these to give enemies a spider sting!

You also get a utility belt and a belt with the distinctive Black Widow buckle.

This costume is available in kids sizes:

If the costume if for wearing at Halloween then you can get an Avengers Black Widow Treat Bag.

These bags come in a variety of styles from small totes to larger ones.

The bags can also be customized with your child's name or other text.

Of course the bags are also hand for role play, helping with the shopping or carrying things on a day out. I haven't found any official Avengers Black Widow jewlery, I'll add it if I do.

But there is women's jewelry from her Marvel colleague Spiderman which works well.

You can get spiderman earrings, necklaces, rings and lots more jewelry to accessorize a Black Widow costume.

Or you can choose to accessorize with jewelry featuring the black widow spider. This works very well for Halloween!

Natasha Romanov has a background as a Russian spy but decided to become a superhero and help protect the earth.

When in superhero mode, Natasha is known as The Black Widow.

Black Widow knows Hawkeye well. They have worked together before (though she once tricked him.)

Black Widow has an important role in the movie and helps to save the world from Loki and his army of alien warriors.

Black Widow is good at psychological tactics and getting information from people. She can also handle herself very well in a fight when necessary.

Do you know a girl who would like a Black Widow Costume? 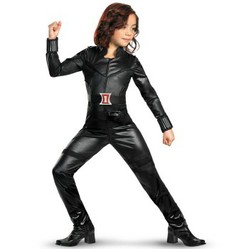