There are new Marvel Avengers LEGO Sets out in April 2012. Captain America, Thor, Hulk and more of our favorites are featured.

The LEGO Marvel Avengers LEGO sets came out in April 2012 to tie in with the new Marvel The Avengers movie for summer 2012. Collect the sets and reenact your favorite super hero moments.

There are some great details in these sets including the use of blue semi-transparent round unit blocks for Iron Man's jets and the very cool claws on Iron Man. I particularly like that the small and medium sets include 3 minifigures. The minifigures are very popular with younger kids who might not be able to cope with the complex builds in the larger sets. And of course kids might be able to buy the smaller sets with their pocket money but have to wait for a birthday or Christmas for the larger sets. You still get lots of build and play value with the small and medium sets.

Collectors will want the larger sets in this range though! The Quinjet Aerial Battle and Hulk's Helicarrier Battle have each have a minifigure that's not available elsewhere and offer large builds with lots of detail.

When are the LEGO Marvel Avengers Sets Released?

The LEGO Marvel Avengers Sets were released in early April 2012. They will are available to order from the LEGO Store online as well as other retailers. See: LEGO Super Heroes at LEGO.com.

In the UK you can buy Lego Marvel Avengers Lego Sets at Amazon UK. Some sets are available to pre-order for release on April 8th.

You can also order LEGO Marvel Super Heroes at the LEGO UK Shop.

The Lego 6869 Quinjet Aerial Battle is the big showpiece set of this wave of Lego Marvel Avengers sets.

The set includes a large Quinjet flying vehicle for the Avengers and the smaller Loki's Flying Chariot. Loki plans to destroy the Earth and the Avengers must stop him.

This is a big set with 735 pieces. The set is rated for kids aged 8-14, but I think a lot of parents will end up building this set for younger kids too. And of course adult fans of Lego and Marvel will enjoy the build and the resulting models.

LEGO 6868 Hulk's Helicarrier Breakout is the other large set in the LEGO Marvel Avengers initial range. The set has 389 pieces and is recommended for kids aged 7-14. That looks about right although slightly younger kids with lots of experience building LEGO models and plenty of patience should be able to attempt it.

The location for this set is inside the Hulk's Helicarrier (he's too big for the Quinjet!) Loki has been captured and there's a glass cell to try and keep him contained. The other large item in this set is the jet fighter plane.

Minifigures in this set:

LEGO 6865 Captain America's Avenging Cycle is the smallest set in this range. It has 72 pieces and is recommended for kids aged 5-12. This will be the set that kids use their pocket money to buy. I've just shown the range to my 5 year old and this is the set he wants. (We're British, but he loves Captain America!)

Captain America's motorcycle is the main vehicle in this set but you also get gunner station and a space glider for the alien army.

Although it's a small set you get 3 minifigures. Only one is a super hero, but still, kids love the minifigures and this set has lots of play value. (As I Mum, I really appreciate this!)

Lego 6867 Loki's Cosmic Cube Escape is another medium-sized set with 181 pieces. It's recommended for kids aged 6-12.

The main vehicle in this set is a blue pick-up truck. Loki is getting away from S.H.I.E.L.D. HQ with the Cosmic Cube (which is included in this set.)

This is another good set for minifigures. You get:

As well as the Avengers tie-in sets there's another Marvel set released at the same time. This time it's an X-Men set starring Wolverine.

Wolverine is another favorite in our house (not just with the kids!) LEGO 6866 Wolverine's Chopper Showdown has 201 pieces and is recommended for kids aged 6-12.

Deadpool's Helicopter is the main piece in this set. It's a red and black helicopter to match the villain Deadpool. Magneto levitates on a disk.

The awesome Wolverine come with a small motorbike. He's got his work cut out for him here!

The minifigures in this set are:

The Hobbit Lego - Bilbo, Gandalf, Thorin
Lego have confirmed that there will be a range of Hobbit Lego to tie in with the 2012 Hobbit movie, An Unexpected Journey. What do we know about the Lego Hobbit sets?

Where to Buy Lego Online

Where to Buy Lego Online
A guide to where to buy Lego online. Find out where to get the best deals, free postage and free offers with your Lego sets.
Updated: 05/21/2012, TerriRexson
Thank you! Would you like to post a comment now?
1

Aw Brenda that's sweet. ToysRUs have the sets listed as in stock and available for shipping (I've included links in the article) but I don't think they are officially released until later in the week, though ToysRUs sometimes get sets early. I can't be certain they would arrive in time for your grandson's birthday. Careful of eBay sellers who have marked the price up, check the prices at ToysRUs.

I've ordered a set for my boys. They look very cool!

This reminds me that my grandson's birthday is April 9th. I've got to get his BD present. I'll go through your link so you can make some money. 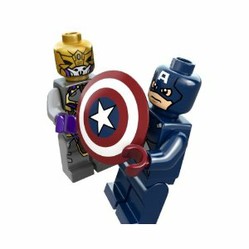