Who is Santa in the 2012 Lego Star Wars advent calendar?

So who is Santa in the 2012 Lego Star Wars advent calendar? That's what everyone wants to know isn't it! Last year Yoda was the Lego Star Wars Santa - he looked very cute in his red santa suit.

This year, the rumors are that the Lego Star Wars advent calendar santa will be ... Darth Maul! Yes, you read that right. Darth Maul as Father Christmas. I was expecting another of the good guys. Obi Wan Kenobe would make a great Santa. But, not it's Darth Maul, well he does have the red color scheme going on!

Darth Maul will apparently have the same red santa suit body as Yoda did lant year. But presumably with longer red santa legs! And black hands too. And a very funky Santa hood over a Darth Maul Lego head. Very funny!

How much is the 2012 Lego Star Wars Advent Calendar?

Note that the Lego Star Wars advent calendar went in and out of stock in the lead up to advent last year. At various times you could not get the advent calendar at recommended retail price, third party vendors were selling it for more than that. 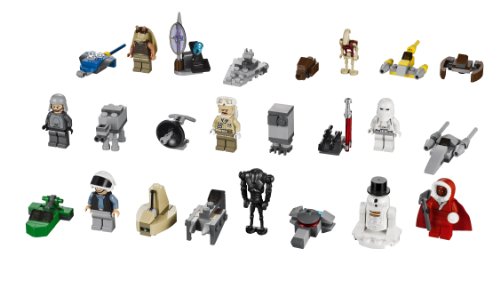 There are 24 different gifts including mini Star Wars vehicles, Star Wars minifigures and a couple of Christmas-themed items so you can create a Star Wars themed festive scene.

You can see the full collection of mini toys in the image above. The mini vehicles are lots of fun and kids just love minifigures.

When is the Lego 9509 Star Wars Advent Calendar Released?

The Lego 9509 Star Wars Advent Calendar was first made available in August 2012 - yes in the summer! The set is likely to be very popular and may sell out so make sure you get yours early and pop it away until the beginning of December (if you can bare to!)

And here's the Lego Star Wars Calendar from 2011 so you know what sort of thing to expect. If you didn't get the Lego 7958 calendar last year then you might want to get it this year instead of the new one as it's likely to be cheaper.

I'll take this over chocolate any year! 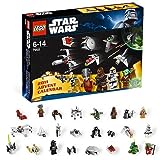