We own the Lego Star Wars Battle of Hoth game and it's very cool. The 32 microfigures and miniature vehicles are brilliant.

As a parent I also appreciate that the Battle of Hoth game board can easily be separated into two pieces to pop back into the box for storage.

Don't miss the photos of the Lego Star Wars microfigures.

So who will you be? Luke Skywalker and the rebels or Darth Vader and the Empire?

A Lego Star Wars Board Game 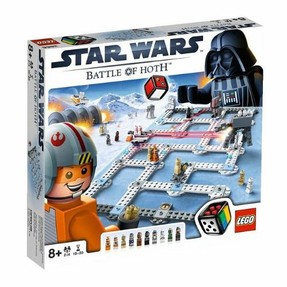 Oh this is very cool! A new Lego Star Wars board game with microfigures and vehicles. Lego 3866 The Battle of Hoth is a new Lego game for 2012.

We're rather excited about the 32 LEGO microfigures included with the game.

We'd want this set even if it didn't have the added bonus of being a fun game to play!

We got this game when it first came out in the UK (before the US for some reason) and we just visited friends who also have the Lego Battle of Hoth game and are having fun with it.

How To Play: LEGO® Star Wars™ the Board Game

The game has a buildable board, buildable dice, vehicles (including AT-AT walkers) and 32 Lego Star Wars Microfigures! I can see lots of people wanting this game just for that amazing collection of microfigures.

The setting for the game is the Battle of Hoth from The Empire Strikes Back.

"It is a dark time for the Rebellion. Darth Vader has discovered Luke Skywalker's secret base on the remote ice planet of Hoth, and Imperial ground forces are ready to attack!"

The Battle of Hoth is a strategy game for 2 players (you can also play a 4 player version.) One side is the Empire and the other side is the Rebel Alliance.

It takes 10-20 minutes to play a game of Lego Battle of Hoth so it's pretty quick for a strategy game - great for those just getting interested in the genre.

A battle of good versus evil

When is the Lego Battle of Hoth Game released?

The Lego Battle of Hoth Game is due for release in the US in March 2012. Check the Lego store for availability.

Lego 3866 The Battle of Hoth is already available to order in the UK:

Buy from Amazon: Lego 3866 The Battle of Hoth UK

There are sellers there willing to ship internationally if you can't wait.

This would make it one of the most expensive Lego games but it does contain 32 Lego Star Wars microfigures so it's not likely to be cheap.

The Battle of Hoth Game Microfigures

There are 10 different kinds of Lego Star Wars Microfigure in the Battle of Hoth, with duplicates of some to take the total count up to 32.

Microfigures fit onto a single Lego stud and are only two bricks tall - they rely on lot on their printing for detail. The Lego Star Wars microfigures in this game look brilliant.

Here's the list of Lego Star Wars microfigures in the Battle of Hoth.

Minifigures from the darkside

The microfigures representing The Empire are:

The Rebel Alliance Microfigures are:

In the Lego Star Wars Battle of Hoth game there are several vehicles include 2 AT AT Walkers and Two Snowspeeders.

The Lego microfigures actually fit into the vehicles as part of the game. The AT AT walkers and Snowspeeders can each carry two microfigures.

Have you Seen the New Lego Monster Fighters Theme for 2012?

LEGO Monster Fighters - 4961-4968
LEGO Monster Fighters is a new Lego theme introduced in summer 2012 featuring mummies, vampires, frankenstein and other monents. Perfect for Halloween Lego builds.
Updated: 08/23/2012, TerriRexson
Thank you! Would you like to post a comment now?
1

Do you like the Lego Battle of Hoth Game? 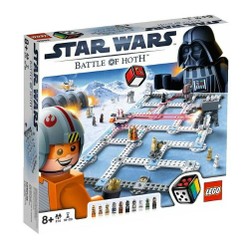