In The Avengers 2012 movie Chris Evans plays Steve Rogers the ultimate soldier who is known as Captain America when he wears his superhero costume.

Captain America has a new costume for the movie (also known as Avengers Assemble.) The costume is very recognisable with it's red, white and blue colors.

There's a kids version of the costume available, it comes in sizes from toddler and preschooler through to big kid. There's an LED light up version too!

This is an official licensed The Avengers movie Captain America costume for kids.

The main costume is a jumpstio with lots of details built in including a muscle chest and arms!

On the chest is a light up LED star which kids will enjoy and which is great for Halloween.

You also get the costume mask with a the A logo on it.

This is the Captain America kids costume without the light-up feature so it's less expensive.

This costume comes in kids and toddler sizes and includes the jumpsuit and mask.

You can add the Captain America gloves below and a shield to finish the costume.

These  Avengers Captain America gloves for kids are a fun costume accessory.

You get one red glove and one blue glove!

The gloves have detail to match the movie costume.

And of course kids will want a Captain America shield to go with their costume!

Captain America's shield with it's red white and blue circles and star design is instantly recognisable.

This Captain America shield by Hasbro is a toy version which shoots discs so kids can play with it as well as using it as a costume accessory.

The Avengers Captain America Blaster is a toy weapon from Hasbro which fires darts. It comes with 6 darts.

The Captain America blaster is for kids aged 6+.

Captain America is a military super soldier from the 1940s. Steve Rogers was given super soldier formula which has enhanced his abilities and he is highly trained in combat.

In The Avengers he has been found frozen in ice but when he is thawed out he still the superhero he was. Rogers finds the modern world rather confusing and still has 1940s values.

In The Avengers movie, Captain America joins the Avengers Initiative to help protect earth from Loki and his army of alien soldiers.

You can find out more about the background of Steve Rogers, Captain America, in the kids books below.

Do you know a child who would like a Captain America costume? 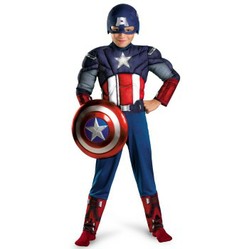 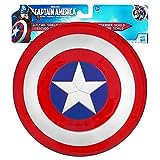