Put together an Avengers Hawkeye Costume for kids. Dress up as Clint Barton for Halloween or some archery role play.

Clint Barton becomes the superhero Hawkeye when he puts on his costume. And the costume that Jeremy Reener has in the Avengers 2012 movie (Avengers Assemble) is very cool!

He wears a black leather or PVC outfit and cool dark shades.

Hawkeye is the ultimate archer so he also has a bow and quiver full of arrows.

There's an official Avengers Hawkeye costume for grown ups but we haven't found one for kids so we'll have to improvise. There is an official Hawkeye toy bow though, we'll take a look at that too.

This is the official licensed Hawkeye bow from Hasbro. It's a usable toy rather than a costume prop, but it's fun to be able to actually shoot (foam) arrows while wearing a Hawkeye costume.

The bow shoots foam arrows up to 35 feet so it makes a really fun toy. The arrows can be stored on top of the bow to be ready to fire.

It's colored rather than black like the one in the movie, but in the Marvel comics Hawkeye wears purple and has purple weapons so it does tie in with Hawkeye's background.

Alternatively you could go with a kids compound bow that uses arrows with suckers or foam arrows.

This is the Adult Hawkeye costume. As far as I'm aware there is no child sized version of this costume. That's a shame. I'll keep a look out and update this page if one becomes available.

I'm sure lots of kids will want to dress up as Hawkeye with his cool bow and arrow.

If you're good at sewing then you might be able to adapt the adult costume? I think all the details would make that tricky.

Start with a Black Vest

Or you could put together your own small Hawkeye costume. The key item is a black vest.

This Rothco Ultraforce Black Vest gets good reviews and comes in kids sizes from Small to XL. At least you'll have a reusable item of clothing that can be worn regularly rather than just a costume for occasional use.

S.H.E.I.L.D. is the crime fighting organisation that Nick Fury works for. Nick gets the Avengers together to form the Avengers Initiative and Hawkeye is included.

This patch has the S.H.E.I.D. logo on it and will add an authentic touch to a homemade costume.

The patch can be ironed on or sewn on.

And you'll definitely want to add some cool dark shades to a kids Hawkeye costume. Hawkeye wears shades in the Avengers movie.

Hawkeye wears shades with a black frame. Something like this will do.

Hawkeye carries his spare arrows in a quiver on his back. You could adapt a simple black quiver like the one shown to attach to a Hawkeye costume.

If your child is going out trick or treating at Halloween in a Hawkeye costume then you can add a Hawkeye treat bag to the costume.

This treat bag comes in a few different styles of bag and can be customized with a personal text message.

You should be able to find an Avengers Hawkeye dog tag necklace on eBay to accessorize a Hawkeye costume. It's a nice finishing touch for a Hawkeye costume and makes it obvious who you are!

If you're going to dress up as Hawkeye then you'll want to know a bit about the character. When he's not wearing his outfit, Hawkeye is Clint Barton.

Barton spent time with a traveling circus as a child and honed his natural ability as an archer. Hawkeye is extremely skilled with a bow and arrow but he does not have super powers.

The potential problem with a bow and arrow is that it only works when you're some distance from your target. Luckily Haweye has been trained in hand to hand combat by none other than Captain America, so he's well prepared if an enemy does manage to get close.

In The Avengers movie, Hawkeye is key to the plot and an important character. I won't give away the story in case you haven't seen the movie yet.

You can read the books below to fill in more of the Marvel Hawkeye backstory.

Do you know a child who would like a Hawkeye Costume?

My son wants a hawkeye costume as well. He even asked me to paint his toy bow and arrow black..

My 5 yr old has been asking for this for a few months now. 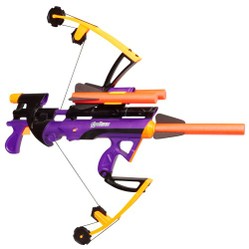 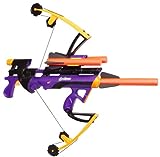