It is without a doubt that in war on land the Spartans were supreme. All the years of harsh, brutal training through which the nation passed produced soldiers who were brave to the very point of death. At sea, however, the Athenians were superior fighters, as we shall soon be told.

The great fleet of Xerxes, the Persian King, sailed eagerly after the small Greek fleet, anxious to destroy it and to win their king's praise.

The people of Athens were in despair. Marching towards them was the vast army of the Persians, and round the coast was sailing the enemy's fleet. The Pass of Thermopylae had been taken, and there was now nothing to prevent the Persians from destroying Athens.

"We must go across the Straits to the island of Salamis," said the Athenians. "We will leave our beloved city empty, and go back to it when the Persians have gone."

So ships took them across to the island, and from there they watched 480 to see what would happen to B.C. Athens. All the young men went to fight on the Greek ships, but those on the island, the old men, the women and the children, knew that when smoke darkened the sky to the east it would mean that Xerxes had arrived and was burning their beloved city to the ground.

It was even as they feared. Xerxes arrived at the empty city and set it on fire. He destroyed the citadel and slew the few defenders there. He cast down the statues and burnt the temples, and soon not one stone was left standing upon another. His vengeance was complete.

All that now remained to be done was to vanquish the small Greek fleet, and that should be easy, for the Persians had bigger ships and much greater numbers.

Meanwhile the Greek sailors had seen their city burning, and with bitter anger in their hearts longed to destroy the Persians in the same way.

The Greek fleet was in the narrow Straits of Salamis, and it was decided that it should stay there, for the Persian ships were big and heavy and would find it difficult to fight in a narrow place.

The Persians soon sent ships to block up each end of the Straits, thinking that now the Greeks were well trapped in the narrow piece of water and could easily be defeated.

When Xerxes arrived on the shore of the mainland with his army, he commanded that the sea-fight should begin. He had a golden throne built for himself overlooking the Straits, and he meant to watch the battle and rejoice over the Greek defeat. By him were scribes who were to write down all the brave deeds they saw.

The morning of the battle dawned. Xerxes climbed to his golden throne, and at the same moment the first of the Persian ships sailed into the Straits of Salamis, to begin the battle. As they entered, the wind rose, and at once the heavy ships became difficult to manage. Themistocles, the Greek general, saw this, and gave the signal to attack at once.

No sooner had the battle begun than the Greeks saw how wise they had been to stay in the narrow Straits and fight the Persian fleet there. The Persian ships soon jammed against one another and could not move. The Greek ships, smaller and lighter, found it easy to row up and ram them. Ship after ship of the Persians was sunk in this way, for the unhappy enemy could not take their vessels away because of the numbers of their own ships pressing into the Straits from behind.

The crash of the iron ramming-heads was heard all day long. Shouts and groans, the gurgle of water, and the creaking of jammed ships floated up to the ears of the watching Persian King. He saw dozens of his ships sink and disappear. He watched them crush each other, fill and go down to the bottom. He saw the light little Greek ships sail here and there, and ram mercilessly. It was the worst day of his life.

When the day drew to an end the battle was over. The Persian fleet was utterly defeated, and all that the remaining ships wanted was to sail safely away to Asia as soon as they could. The Greeks had won the victory!

Off went the Persian ships in the direction of Asia. Xerxes descended trembling from his throne, a terrible thought in his head. Suppose the Greeks should destroy the bridges he had built across the Dardanelles? What should he do? He had better return hastily, or he would be trapped in Greece, and perhaps these fierce, unconquerable enemies would kill him, the great Persian ruler.

Xerxes hurried back to the Dardanelles, leaving a general called Mardonius behind him, with 300,000 Persians and a command to conquer the whole of Greece before they returned. When he came to where he had left the two fine bridges, he was horrified to find that they were gone. A storm had blown them to pieces. There was nothing to do but to ferry his army across in boats, and a slow and laborious undertaking it was, very different from that grand day when Xerxes had sat on the hillside watching his two million well-trained men march boldly across to Greece.

The army that Xerxes had left behind him marched on Athens again. The city had been rebuilt by the Athenians, and they were in despair when they saw the Persians coming again. Once more their city was burnt down, and they had to fly to Salamis.

Then they sent to Sparta for help, and got together an army of 100,000 men, commanded by General Pausanias, nephew of that brave King Leonidas who fell so heroically at the Pass of Thermopylae.

The Persians attacked the Greeks, and a fierce battle was soon raging. Then Mardonius, the Persian leader, 479 was killed, and in fear and panic the Persians began to fly back to their camp. The Greeks pursued them, and soon the whole camp was taken and looted. All the Persians were slain save for a small company that fled back to Persia.

On the same day that this battle was fought came the end of the Persian fleet which was running away to Asia. It arrived at a place called Mycale, where 60,000 Persians were encamped on the shore.

The men landed, and drew their ships up on the beach, building a rampart round them of stones and wood. Then up came the Greek ships, and the men landed nearby. They marched straight on the Persians, broke down the rampart, and defeated them completely. Then they set to work to burn the Persian ships.

Soon the black smoke was streaming on the wind. It was the end of the Persian invasion. Greece was saved, and very proud were the little city states as they set to work to build themselves up again. As for Athens, she was honored by the whole of Greece, and her glorious name will never be forgotten.

Wonder why I never heard this in school? Makes for a great history lesson.

If you missed it, there's a prequel to this Wizzley article: http://wizzley.com/the-300-spartans/ 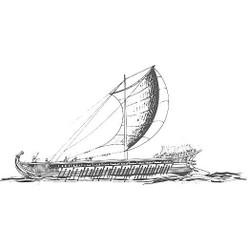 The Battle of Salamis: The Naval Encounter that Saved Greece -...
100%  17   8 cmoneyspinner
Ancient Era

Alexander the Great was not a prophet. But he does hold a place in history as being one of the most exceptional political and military leaders.
66%  7   6 DavidPaulWagner
Ancient Era

Ancient Rome was a republic and then an empire that existed for almost a thousand years. Today's world has inherited a wonderful heritage from ancient Rome.
Loading ...
Error!