Dice is the plural of the word 'die', and comes from the Latin dare (meaning: to give).

Dice were originally small ivory or bone cubes, the six sides of which are marked with black dots from one to six. These dots are so arranged that any two opposite sides on the cube always make up the number seven. Two dice are called a pair. They were used chiefly for gambling purposes, but they were also employed in backgammon and other games.

Dice boxes were made in ancient times of leather or wood or some equally suitable material, and so constructed that no trickery could be resorted to in the throwing of the dice. Palamades is said to have invented dice about the year 1244 B.C., but we have still earlier evidences of their use in Egyptian times. In the British Museum, in the Egyptian gallery, is to be seen an ivory astragal, which belonged to the Queen Hatesu in around 1600 B.C.

There are several games played with five poker dice, each inscribed A, K, Q, J, 10, 9. These include 'aces' (each player rolls all five dice at once, laying aside each ace as it appears, and continuing to roll the remaining dice until he has scored five aces, when the other players follow; five aces in fewest throws wins); 'dice poker' (with a scoring system based on the card game); and 'liar dice' (in which the five dice are rolled, hidden, called truly or falsely and passed on, unseen by the receiver, who can accept or challenge the call. If he accepts he must call higher. If he challenges and the caller exposes the combination he called or a higher one, the challenger pays; if the caller exposes a lower combination than he announced, the caller pays. The values of combinations are as in poker).

How to Play Domino Dice

Each player in turn rolls the dice and must roll a double on their first turn. Should a player not roll a double they lose a turn. The player rolling the double uses it to start the domino chain.

The chain is built by placing matching dice end to end in one long line and using the sequential numbers to make the chain (e.g. the 6 dice may be followed by the 5 dice and then the 4 and so on). Scoring is achieved by the total of the dice in the chain. After placing the dice down the player then rolls the remaining dice to take another turn.

If the player cannot add a dice to the chain they lose a turn until they roll a correct number. When all the dice are used the player has the option of using this chain or rolling all the dice to start again to achieve a higher score.

The player with the highest score wins the game.

I'm always looking for new family games to play. Thanks for this! 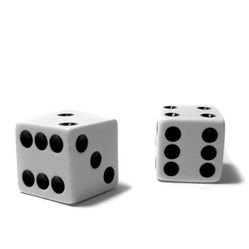