As soon as I heard a couple of the songs on the Being Flynn Soundtrack, it brought back memories of having to practice Bach's Goldberg variations on the piano, especially on "Asleep At The Wheel" & "Jonathan Goes to Work" with the characteristic Bach counterpoint melodies. Both are lovely piano and cello duets.

As it turns out, the producers gave composer Damon Gough the direction to create "Bache-esque" compositions for De Niro's character. "Priest" has a foreboding feel you can imagine Yo-Yo ma performing.

In the meantime, the producers temped the movie to some of Damon's previous songs especially the ones for Paul Dano's character, so he was in the unusual position of having to replace some of his own songs with new original music which according to Damon "was a new experience for me, and felt quite weird initially, but I’m really happy with the result."

Director Paul Weitz was thrilled to work again with Damon Gough noting that "Scoring a movie with an orchestra is magical, but knowing that one of your favorite songwriters has written songs inspired by work that you’ve done is uniquely meaningful.” Weitz was probably referring, in part, to some of the original songs with lyrics that Gough wrote including "It's Too Late" with its modern 3/4 waltz stutter and the mellow songs "Another Day, Another Night" and "Let It Rain" which musically underscore the movie's themes.

Who is Badly Drawn Boy?

Hailing from across the pond, British singer/songwriter, Damon Gough otherwise known as Badly Drawn Boy last worked with Being Flynn writer/director Paul Weitz on the About a Boy Soundtrack, for which Gough was a Satellite Award nominee. Damon last worked with Paul Weitz shortly after the release of Badly Drawn Boy’s debut album, The Hour of Bewilderbeast, released in 2000.

What's the Story? About the Movie Being Flynn

Based On A True Story By Nick Flynn

It's hard to imagine a young co-star that can match Robert De Niro's impressive screen presence but just as Bradley Cooper shared screen time in Limitless and Jason Statham & Clive Owen held their own in Killer Elite, Paul Dano (Little Miss Sunshine) stands up to De Niro as his estranged son, Nick Flynn. You may also remember Dano as the ambitious young preacher, ferociously scheming to redeem Daniel Day Lewis' fiery soul in There Will Be Blood.

Adapted from the 2004 autobiographical memoir Another Bullsh__t Night in Suck City by Nick Flynn, writer/director Paul Weitz (About a Boy) tells the moving dramatic story about a father and his son through Flynn's personal story as a writer and his reconciliation with his deadbeat dad, an absentee father and self-proclaimed master storyteller who re-appears in Flynn's life after 18 years apart.

What's the Release Date of Being Flynn?

When's the Movie Coming Out?

Being Flynn is in limited release with an initial release in a limited number of theaters in New York and Los Angeles on March 2nd, 2012. A week later, the film can be seen in San Francisco, Chicago, Boston, Dallas, and Washington, DC on March 9th. Additional cities and release dates will be announced pending the movie's initial reception in these major cities.

Robert De Niro in Being Flynn

You May Also Enjoy

Recent Movies From the Cast of Being Flynn 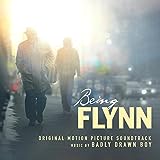