I love Steampunk and I want to share here some of the best steampunk movies that I collected and watched over the years.

When it comes to the best steampunk movies, there are many opinions on what exactly is considered steampunk. In a nutshell, this movie genre is one that is set in a Victorian alternate futuristic world with heavy steam powered devices and anachronistic technology that has taken off in a way that you don't see it in real life.

Steampunk is basically belonging to the speculative fiction genre, which also encompasses other subgenres such as dystopia, cyberpunk, post-apocalyptic and science fiction, to name just a few.

What Exactly Is Steampunk? As I mentioned before, Steampunk is in fact a subgenre of speculative fiction, however that doesn't say much its characteristics and what makes it what it is.

One thing I've noticed when talking with people about Steampunk is that it represents different things for different people. However, for most folks, some things are quite common, so let's see what else can we attribute to Steampunk:

First of all, it is in fact speculative fiction, which means that one might ask what would happen if a particular story or even played out in a different way? Imagine your watching a movie and it ended. At some point you might start daydreaming about what if the ending were different, what if characters took other actions that led to other developments. So basically the storylink always takes place in an alternative universe, similar to ours, yet not quite the same.

Also steampunk includes anachronistic technology, and by this we mean technology that normally wouldn't exist in that particular era, even if it is common right now. For example computers are very common these days, but they wouldn't be even existing in the 18th Century. Or imagine someone using an iPad in the 19th Century.

The setting is usually the 18th or 19th Century Victorian England. Alternatively you might find steampunk movies or novels set in the American Wild West. However where it differs from Victorian era fiction as such as in the fact that it doesn't really depict that time in its true light with dirty streets, non-hygienic settings, poor people and all sort of incurable diseases which now are cured with simple pills. Steampunk fiction idolizes Victorian era, romanticizes and gives it attributions of the current day and time, which are far from being accurate at all.

Also where it comes extremely close to dystopian fiction, steampunk usually contains an element (or a character) that is out of the norm, that rebels or is seen as very different in the way they act, dress or look like.

Image Source: Creative Commons (depicting G.D. Falken, one of the most popular Steampunk authors of all time)

You Can Learn More About Steampunk Here

One of my favorite steampunk movies

The Golden Compass is a film based on the His Dark Materials trilogy written by Philip Pullman (one of my favorite set of books ever). The story focuses on an alternative universe where the souls of people are outside of the body and in a small daemon (a small animal, a familiar, if you know your fantasy). Each daemon is different for everyone. Cats, lions, tigers, mice, there are all sorts of animals as souls.

Lyra is the main character in this touching adventure movie who sets out to save her best friend who has been kidnapped, while at the same time is trying to find her missing uncle.

So why is The Golden Compass a steampunk movie? Well, the story it is set in an alternate universe dominated by the Magisterium, who wants to overtake the world. There are lots of interesting gadgets that you normally wouldn't find it around that time in the world, like the popular magic golden compass that helps her find the truth from people. Also you have the mechanical spy flies belonging to Mrs. Coulter. And if you watch the movie you'll see the way people dress are very Victorian in style, and the architecture as backdrop setting is Victorian style in nature as well.

And finally let's not forget the corruption which the main character is fighting against, in this case the high ranking leaders, along with religious leaders.

Get The Golden Compass Here

The Golden Compass As Steampunk Movie

We all know the story of Sherlock Holmes. Or the several stories in the movies and TV series made over the years. But nothing comes closer to Steampunk than the Sherlock Holmes movie made in 2009 with the cute Robert Downey.

The setting in the movie is an alternate Victorian era London set in 1891 with huge and weird industrial machinery, which never really existed in real life during those times. Weird things like pneumatic poison jets and eElectro-magnetic radio control are used in abundance. And if you watch the movie, you'll see those to die for tweed outfits and the architecture that remind us so strongly about steampunk as a genre.

And how about Sherlock being closed off in his room testing various drugs and bombs and other devices. Also there are some elements of supernatural which are usually part of steampunk overall.

So is the latest Sherlock Holmes steampunk? I'd say yes, even more so than the previous incarnations of the same story in movie or books.

The Prestige is a movie released in 2006 based on the same named novel by Christopher Priest. The setting is, as expected, the romanticized Victorian London, along with the Colorado lab of no other than Nicola Tesla, who in this movie invented a very steampunk device: a time travel machine.

Nicole Tesla is known for inventing an electrical generator and overall for his great contributions to the development of electricity overall, so in this movie he is again inventing something based on electricity. But of course the invention is something that is not of this - normal - time, but of that alternate world set at the end of the 19th Century.

In this movie  Robert Angier and Alfred Borden, both Victorian illusionists and magicians, start out by working together until something happens that pushes them apart, making them fierce competitors and deadly enemies.

Some people consider The Prestige less of a steampunk movie, and I understand their reasons as well. Electricity is something that we are using today and it was on the brink of discovery back in the day when the movie was set. Also Nicola Tesla actually existed in real life as well. Finally there is no major authority against which forces join to overthrown. Still, if you look at the setting, the gadgets, the fashion of the time and some of the elements, we can easily consider it a steampunk movie.

Get The Prestige On DVD

The League Of Extraodinary Gentlemen

Steampunk movie based on a comic book series

Even if you haven't seen The League of Extraordinary Gentlemen, you might have read the comic book series with the same name by Alan Moore and Kevin O'Neill. The storyline takes place, as usual, in an alternative late 19th century Victorian era England with supernatural elements such as superheroes of the time.

The "league" is set to battle The Fantom, a madman who terrorizes the world with his technological power. The extraordinary gentlemen are no other than Captain Nemo, the inventor, the vampire Mina Harker, Rodney Skinner who is invisible to the outside world, Tom Sawyer who is in this case a US secret agent, Dorian Gray and finally Dr. Jekyll and Mr. Hide in one person.

The steampunk elements are all here: good battling the evil superpower, the fashion, architecture and technological gadgets of the alternative Victorian times. I enjoyed watching the Nautilus boat next to assault rifles, a Bentley car with old lanterns reminding us of the Art Nouveau style.

Also there is the 'what if scenario' that steampunk has in common, an alternative timeline in which some of the heroes play with dangerous scientific experiments, and everyone uses technological advances in the forms of cool gadgets to fight evil.

Check Out The Movie With Sean Connery

Steamboy is a Japanese anime steampunk film from 2004. Usually anime is not my favorite type of movie to watch, but as I like steampunk, I decided to give it a go. And much to my surprise I actually liked it.

Steampunk plays out in 1866 in a very Victorian England where Ray Steam (even the name matches with the genre) is given from his grandfather, an inventor by trade, a mysterious Steam Ball, a gadget that he has to guard with his life, if necessary. As soon as he gets the gadget, two shady characters come demanding the ball, which Ray refuses to give, of course.

Young Ray is a very gifted inventor as well, who can easily understand complex machines and gadgets without having to fiddle too much with them. The setting is all Victorian in style with the typical steam machinery that steampunk is so well known for. And let's not forge the awesome visuals that practically take your breath away. And speaking of gadgets, just watch the cool steampunk automobiles that the chasing happens.

There is lots of action in this anime film, so I won't give the twists and turns in the plot away, but even if you're not much into steampunk, the film is worth watching for what it is: a very entertaining Japanese cartoon that took the entire world with its charm.

Check Out Steamboy At Amazon

Watch the official trailer for some cool shots

A Few More Of The Best Steampunk Movies

While the top 5 films listed are my favorite steampunk movies overall, if you want more of the same, here are a few more that you can search Amazon for - or just go to Youtube to see some trailers and decided which you like best:

Have Any Other Great Steampunk Movies Recommendations?

I absolutely adored 'The Prestige'. I'd recommend that to anyone.

What is a dystopian society in current fiction, what are its main characteris... 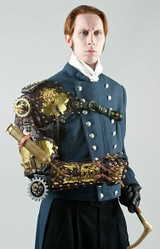 What is a dystopian society in current fiction, what are its main characteristics, and how does it all tie in with the dystopian novels?
25%  2   2 marciag
Young Adult Books