A review of the 1939 murder mystery novel written by Agatha Christie.

Synopsis: When former police officer Luke Fitzwilliam meets Miss Fullerton while traveling on a train to London, he thinks the woman may be a tad bit crazy. After all, her stories of people being murdered seemed a bit fantastic. However, when Miss Fullerton is killed later that same day and the doctor she predicted would be the next victim dies a short time later, he begins to believe there may be something to her tale and chooses to investigate.

When I made the decision to read Agatha Christie books, my intention was to read them all in order. However, I found I liked Hercule Poirot books best and eventually shifted my attention to those instead.

But, now that I'm done with the Poirot novels, I am now re-tracing my steps a bit and looking for books I originally skipped over. That included this book, which I checked out the last time I was at the library. Unfortunately, it just wasn't as interesting as I was hoping it would be.

Overall, I thought the premise of the book was somewhat intriguing. Since Fitzwilliam didn't know much about Miss Fullerton or her village, it was very possible the deaths were exactly what they seemed, accidental. And, if they were murders, the fact there seemed to be no connection between the victims (making the motive murky, at best), did mean just about anyone could be the killer.

The problem was the book wound up being a lot more predictable than I was expecting from an Agatha Christie novel. When Fitzwilliam meets the engaged Bridget, for example, it wasn't too difficult to figure out he would eventually fall in love with her and win her heart (which, in itself, was kind of impressive considering they just met).

Unfortunately, the predictability also carried over to the actual mystery. Despite Christie making an effort to throw in some red herrings, I had no problem figuring out who the killer was, largely because one of the murder methods (at least with a little thought) essentially ruled out every other potential suspect because of their gender. And, while I kept reading in the hopes Christie would surprise me, the book only confirmed my suspicions.

I also found I struggled to find Fitzwilliam even remotely interesting, mostly because he was kind of bland when compared to many of other Christie's detectives. Other than him being a retired police officer, there was nothing about him that really stood out. Maybe if he had some sort of unique quirk, it would have been a little different.

It has an intriguing premise but, unfortunately, the book proved to be too predictable and ultimately didn't live up to expectations when compared to other Agatha Christie novels.

I do like this book but I agree it is not as enjoyable of many of her others. 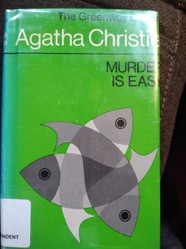