When Jonathan Antoine opened his mouth to speak, a nation tittered. When he began to sing, the same nation gaped.

To say that he's good is to consider the Pope to be a little bit Catholic. He was likened to Pavarotti on his very first public performance!

But what about Charlotte? She's merely average and the judges wanted her to simply go away. What would Jonathan say about his friend, when a chance for stardom hung in the balance?

How many times do we have to say it? You don't judge a book by its cover! (Even if it does make great television.) 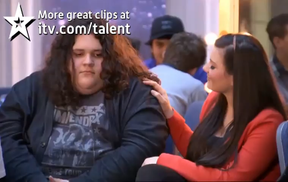 Television audiences to any reality talent show are used to encountering the good, the bad and the ugly in equal measure. (And that's just on the judge's panel!)

When Jonathan Antoine and Charlotte Jaconelli stepped onto the stage of Britain's Got Talent, those watching were prepared for anything. Except what they were about to actually hear.

Charlotte, a confident sixteen year old, did most of the talking. But most snap judgements are made on looks and everyone was staring at the teenager beside her. The show's makers, in anticipation of this (or maybe ensuring that opinion was steered in that direction), cut to a backstage interview.

There was seventeen year old Jonathan shyly talking about being bullied for his size. There was Charlotte forthrightly stating that she would always defend him. People should look at what's inside, not what's on the surface.

But for now, Jonathan was on the stage. For myself, it wasn't so much his size that had me biting my nails on his behalf, but the fact that he was trembling from head to foot.

Simon, in his lucratively scathing manner, asked if they thought they might win. His expression said, 'The chick looks half-decent, the dude's a liability.' But nevertheless, after Charlotte's affirmation, he invited them to sing.

Let's just say that 'Another Susan Boyle' started trending world-wide on Twitter within minutes of them stepping off the stage.

Popera from Jonathan and Charlotte

The duo's audition on Britain's Got Talent, broadcast on March 24th 2012. They sang The Prayer by Celine Dion and Andrea Bocelli.

Is Jonathan Antoine the new Pavarotti?

Even if he was singing an Andrea Bocelli song, we mean.

"That's another Pavarotti, that boy," Simon Cowell was heard to say, as the judges huddled together after the teenagers had fled to the wings. "I haven't heard a voice like that in years!"

There was no dissent amongst his fellow panel members, nor from the audience back home.

However, there was a big 'no' for one of Simon's other thoughts on the matter. He wished to split up Charlotte and Jonathan, telling them to their faces that Charlotte would hold him back.

Her friend was having none of it.  "Well, we've come on as a duo," Jonathan said, shaking with fright, "And, erm, we're going to stay here as a duo." He flashed one of his shy smiles and the theater audience cheered themselves into a standing ovation.

He's already won British hearts. The trick is now to turn that into world stardom.

But in the meantime, let's compare that voice with the greats. Here are two videos demonstrating the powerful tenor voices of both Bocelli and Pavarotti.

This is the original version of the song performed by Jonathan and Charlotte.

What are the chances of this song turning up later in the show?

Albums by Charlotte and Jonathan

The duo went on to reach the finals of Britain's Got Talent, but were knocked off the winning spot by another act. Nevertheless, Simon Cowell signed them up.

More from Britain's Got Talent 2012

Britain's Got Talent: Ryan O'Shaughnessy
With Celtic charm and his own composition, another hot favorite emerges from the ITV talent show's 2012 auditions.

Britain's Got Talent: Only Boys Aloud
Charlotte and Jonathan aren't the only act grabbing headlines from the ITV talent show auditions.

Britain's Got Talent on eBay

The sub-title got added later. On the original, I'm not sure that you even saw him lean in, let alone whisper.

That said, I'm sure that most of these Susan Boyle moments get built up in the editing. There is a certain formulaic structure to them now. Bring on someone whom the audience will judge for shallow reasons. Let them show their brilliance. Film the audience looking stunned and repenting instantly of their snap judgements.

The moral: even frumpiness; female facial hair; poverty; obesity; bad hair-styles; and bad fashion sense can be forgiven, if the person can sing.

When you analyze it too deeply, it is horrific. But it makes great television when it happens. Plus we can all feel superior, because we're at home and probably got tipped off before we watched it.

I thought it was a bit of a set up - from the sub-title on Crowel's whisper to his fellow judge, and the long pan across the bored audience. I'm sure the audience is bored most of the time - it probably goes on for 8hrs! Susan Boyle was amazing - this one not so much. He can sing - but he's a bit young to be pushing it - even as a tenor

So many of them just looked bored at that point, and Simon was rude. I really don't get bored of hearing them sing. I'm torn between them and Only Boys Aloud to win. :)

Yeah I watched this the other night and you could tell that it was another moment were the Judges and the Audience was like What! who is this chubby guy and what's he got to offer and then his voice just erupted out of him and everyone was like whoo hoo you're amazing! I knew it blah blah!....superb voice though!

You too? That's pretty much the reaction of everyone I know who's heard it so far. I keep replaying the video. He's amazing.

Wow! Amazing voice!
I have to say that I actually like Simon's honesty, and bluntness because he tells them the truth. So many of the singers come thinking they are good when they are really terrible.

Wasn't it? I had goosebumps hearing it, so I had to get it out fast. There's a big future in the limelight for them, that much is obvious.

You're very welcome. I love moments like this. :D

Thanks for bringing this clip. I love it! I never would have seen it otherwise. Such a spectacular performance - and this is just the start!

Oh wow! I would have PAID to have seen him do that!

I find it so utterly insidious when those smug judges totally destroy someone on stage. Unfortunately Simon Cowell has found a lot of profit in being a bully. People like watching him do it, which says so much about television audiences too. He drives me up the wall.

Charlotte and Jonathan aren't the only act grabbing headlines from the ITV ta...

With Celtic charm and his own composition, another hot favorite emerges from ... 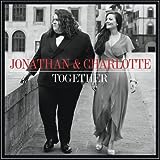 Together (US Version)
42%  4   4 JoHarrington
Television Stars

With Celtic charm and his own composition, another hot favorite emerges from the ITV talent show's 2012 auditions.
Loading ...
Error!