With Celtic charm and his own composition, another hot favorite emerges from the ITV talent show's 2012 auditions.

Love is in the air for one young Irishman, and he's taking to national television to tell one lady just how he feels about her.

But before he can get any answers to his heart-felt question back home, he first has to impress the Britain's Got Talent judges AND the viewers back home.

Fortunately, there wasn't a dry eye in the house watching HIS performance; and now we ALL want to know what she said!

Shortly after being on Britain's Got Talent, Ryan released an album. Naturally, 'No Name' is on it!

This is one heck of a way to ask your best friend out on a date! 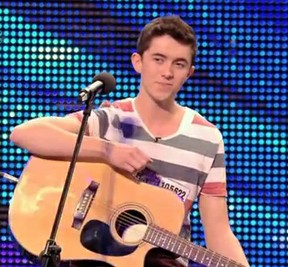 Judges David Walliams and Simon Cowell tried to push him into it, but Ryan O'Shaughnessy refused to reveal the lucky lady's name.

He was about to perform his own love song dedicated to her, while a theater audience awwwed at his awkward squirming.

It was understandable. After all, the teenager had just told them that she didn't know about his six year long crush on her.

She is apparently his best friend. Perhaps she would guess, as she watched the television at home.

Celebrity host Ant advised from the wings that Ryan didn't have to tell them anything. The nineteen year old gratefully remained close-lipped.

Chivalry? Or the preemptive strategy of a young college student effectively about to ask someone out live on national TV? It would be awful if she said no. Worse still, if everyone back home and in the press knew who she was!

Simon Cowell gave up. "Ok, Ryan, best of luck and I hope this works."

It's often an error to audition with your own composition on a televised talent show, but not for Ryan. Within minutes No Name - the title of the song - was trending on Twitter. And a whole nation of women were wishing it was all about them

So what is he doing on Britain's Got Talent? Britain being the operative word there. Ryan O'Shaughnessy had it all. A cute smile, a handsome face, lovely guitar playing and a fantastic love song.

He was very charismatic too. Judging by the gasps, expressions and Tweets, he could have pulled on either side of the Irish Sea within minutes of taking the stage.

So other than jealousy amongst his fellow men, what could anyone possibly have against him?

The answer came within seconds on Twitter. One fact was patently hard to miss. If his name and accent hadn't given it away, then Ryan quite openly said it. He's from Dublin; and that city is the capital of Eire!

Why is this an issue? Because Ireland is not in Britain; and the program is called Britain's Got Talent. In this particular instance, Britain most certainly hasn't. Ireland took it all!

(For the geographically challenged, Great Britain refers to the countries of Cornwall, England, Scotland and Wales. Even Brittany (Little Britain) could probably ninja in before Ireland did. The Irish never have and never will be Britons, despite the best historical efforts of Westminster to make them so.)

So many indignant individuals, in both Britain AND Ireland, Tweeted their confusion at Ryan being allowed to audition, that 'He's Irish' trended alongside #noname. The latter being his own composition, which he performed on the show.

Ireland, Britain and the UK Explained

Maps and Vectors of Great Britain and Ireland

Buy these maps to help untangle the complicated geography of this bit of Europe.

Are Irish People Allowed to be on Britain's Got Talent?

Yes. Ryan would not have been allowed through the application process, if the Irish were excluded!

Let's lay this one to rest before it even takes hold. Every contestant on Britain's Got Talent has to fill in an application form before they audition. It covers a range of things, including age (and parental permission if you're a minor), criminal convictions and everything else which might be a barrier to fame.

Most importantly of all for Ryan, it also asks about residency. The rules state (my own bolding here):

You must be resident in the UK or Republic of Ireland with a valid passport. You will provide the Company with documentation in order to substantiate your age (i.e. birth certificate and/or valid passport).

The issue shouldn't be that Ryan is Irish, but that the show isn't called Britain, Northern Ireland and Republic of Ireland's Got Talent given that all are canvassed here. On the other hand, the Isle of Man, Guernsey and Jersey are neither in Britain nor the UK. They are all dependencies of the British Crown! (Unless, of course, 'Britain' refers to the British Isles and not Great Britain.)

Please note that nationality isn't important at all. The person auditioning merely has to legally reside in the United Kingdom or Eire.

More Articles About Britain's Got Talent

Britain's Got Talent: Only Boys Aloud
Charlotte and Jonathan aren't the only act grabbing headlines from the ITV talent show auditions.

Britain's Got Talent on eBay

And What Did She Say?

Ryan tweeted the following day, after being besieged by hundreds of thousands of Twitters wanting to know - what did the 'no name' lady say after hearing the song?  Are they an item?

I was thinking Damien Rice, but that might just be the accent and guitar.

It's all very exciting on @_Ryan_Acoustic right now. That's Ryan O'Shaughnessy's Twitter account. He's promising to tell us her name, when he hits 28,000 followers. It's only 700 off after a sudden surge.

I'm assuming from this that she said yes. :)

Charlotte and Jonathan aren't the only act grabbing headlines from the ITV ta... 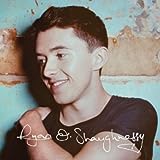