Clone Troopers are the soldiers that make up the bulk of the Grand Army of the Republic, commanded by Jedis, that feature in the movies "Attack of the Clones" and "Revenge of the Sith" as well as in the CGI television series "The Clone Wars".

If you are a LEGO Star Wars fan creating a Clone army then buying several battle packs is a great way to multiply your forces quickly - after all they are cannon fodder and there will be lots of casualties! 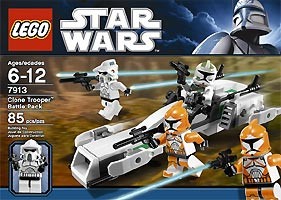 The Clone Trooper battle pack 7913 provides a way for Star Wars Lego fans to quickly build up the number of Clone Trooper mini figures they have in order to create their own Clone army in preparation to fighting the droid forces of the Separatists.

85 pieces make up this battle pack and it provides a variety of clones and weapons with which to build a specialized clone army.

This battle pack contains four Clone Troopers, although only two of them are identical. Two predominantly orange bomb squad troopers are armed with a pistol and rifle blaster as well as a Clone Commander who has green printing on his body' the final Clone is an AFT trooper.

As well as these four nice additions to your Clone army, this battle pack also comes with a BARC speeder so that your Clones can speed into battle and carry out long range missions.

Please watch the video review for detailed information on this battle pack.

Bomb Squad Troopers
The two bomb squad troopers are of great interest to Lego Star Wars fans as they are new to this set. They have orange moulded helmets with white and black printing as well as a lot of nicely detailed printing on their torso and legs.

ARF Trooper
The torso of this clone is a standard Lego Clone Trooper torso but the helmet is a new design and gives this mini figure a cool look.

Clone Commander
This unnamed Clone Trooper commander has some cool green printing on his torso and legs. In the battle pack 7913 he is armed with two pistol blasters; the mini figure featured has been customized with a large chain gun and antenna.

Reconnaissance missions for the Republic forces were often carried out using BARC speeders; both Clone Troopers and Jedis used these vehicles.

This BARC speeder uses the desgin used in a number of other Star Wars Lego sets using a white, grey and green colour scheme. It is a nice little model to assemble and great for playing with; for those who already have an excess of Lego pieces the instructions for this model can be found here - Barc speeder Lego instructions.

What Do You Think Of Lego Star Wars Clone Trooper Battle Pack 7913?

Clone Troopers can never have enough guns in their fight against droid armies. These long and short blasters are the standard weapons for Clones and can be used to give your mini figures more firepower. The small blaster featured here is probably modeled on the DH-17 pistol from the Star Wars universe, whilst the larger one is probably based on the E 11 blaster rifle.

Lego Clone
Clone Troopers are any one of a variety of battle troops created from the DNA of Jango Fett by the expert cloners of Kamino in the Star Wars series of movies, books and video games.

Lego Jawas
Lego Jawa mini figures are based on the Jawa characters from the original Star Wars movie - Episode IV; A New Hope and are available on only one Star Wars Lego set: LEGO Star Wars Sandcrawler.

Star Wars Lego A Wing
The Lego model of the A Wing starfighter as seen in the movie The Return of the Jedi used in the attack on the second Death Star.

Geonosian Lego
Lego Geonosian warriors, zombies and pilots are ready, armed and waiting for the impending attack of the Clones and their Jedi Generals.

nickupton, Thank you for pictures, practicalities and products.
These sets are helpful in getting their owners and players to think about strategy so that they aren't overwhelmed the first time in aggressive, pugilistic, violent situations. (An acquaintance confided that the big advantage to a self-defense class is knowing what it feels like to be grabbed without permission for nefarious purposes.) It's interesting to ponder the educational after-effects of films such as Star Wars and its spin-off films and products. 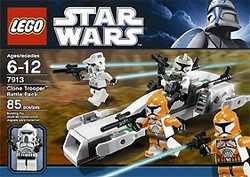 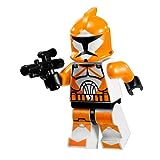 Star Wars Lego minifigures and sets based on the battle of Geonosis from the Star Wars saga.
Loading ...
Error!