Ailurophiles will enjoy this page that presents a bit of feline fun, and selection of cool cat doormats that celebrate cats and cat lovers.

Welcome to this page about cats and cat welcome mats!

Cute, playful kittens and soft purring felines. Some people just can't get enough of them. For Ailurophiles, or cat fanciers, one is almost never enough, whether it's a real live kitty or some form of feline decor.

If you, or someone you know fits that description, then this page is for you. Not only will you find a nice selection of cat welcome mats and funny feline doormats for your front door, but some cool extras as well.

There are some fun feline facts, randomly chosen to satisfy your intellectual curiosity. You'll even find out how to calculate how high you cat might be able to jump.

Surprised Kitty is here, too, along with a couple of silly parodies that aim to ride along on the cattails of the wildly popular little internet video of cite little Atilla. (One really made me giggle, and I hope it will do the same for you.)

Image by blandineschillinger at Pixabay

Everyone Has a Favorite Breed of Cat

Even If it's the Domestic Shorthair

The CFA (Cat Fanciers Association) currently recognizes about 40 distinct breeds, and there are different varieties within each breed. Everyone has their favorite color or breed.

Personally, I've never owned a pure bred cat.  I have nothing against them.  They are certainly beautiful creatures.   I just find it  far too easy to fall in love with rescues.

As for my favorite color or coat pattern ... I'm particularly fond of solid colored cats (like the one shown here) and Tortoise Shells.

Maybe you'll tell me your favorite - even if. like me, your favorite is the Domestic Shorthair, which is a fancy way of saying "alleycat.".  (There's a place for comments at the end of the page.)

SOME people may find this one amusing.  However, those REALLY in the know can attest to its veracity!

Those of us who live with cats know that we don't actually own them.  Our felines know the truth... they own us, and we exist to cater to them!  That's certainly the case with our fur baby, and it becomes more and more evident every day.

An American made product.  Material:  indoor - outdoor carpet.   Hose washable.  (The mat, not the cat!)

A Random Collection of Facts About Cats

MOST POPULAR  BREED - According to the Cat Fanciers Association, the most popular breed of cat in America is the Persian.

MOLLIES AND QUEENS - Everyone knows that a male is a tom, but did you know a female is properly called either a molly or a queen?

CAT LUCK - Some people in the United States consider black cats unlucky, but the opposite is true in England and Asia, where they are thought to bring good luck.

LEFT and RIGHT - Most female cats are right handed . . . er right pawed, while males are predominately left pawed.  (My male is left pawed)

HEARING - Unlike humans and dogs, cats can hear ultrasonic sound.

POPULARITY - More than one in four American households has a feline pet.

PRICEY PETS - The most expensive breed is the Ashera, which sells for between$22,000 and $125,000.  It's actually a specialty Savannah cat, and a hybrid of domestic and wild cats.  They're available only from the Lifestyle Pet Company, and the company ensures their rarity by breeding only five per year.

How Far or High Can a Cat Jump?

How To Calculate a Cat's Jumping Ability

Cats are pretty good jumpers. Want to know how high yours might be able to jump?  Then, do this:

Measure his or her  tail and multiply the results by five.     This will give you an estimate for how high your pet can probably jump. (Generally, cats can jump at least five times the length of their tail, but some can do even better.)

I tried this with Walker, Florida Feline.  I'm afraid I didn't get an exact measurement.  It seems he doesn't much appreciate having his tail measured, and kept moving it around a lot!  You can see in the picture, that he looks a little irritated.

So much for his scientific curiosity!

The Ideal Doormat for a True Cat Lover

The cat could very well be man's best friend but would never stoop to admitting it.

Made Atilla the Kitten an Overnight Sensation

For whatever reason, these 17 seconds of kitten cuteness went viral, and became one of the most popular videos ever.  Have you seen it?   If not, here's your chance.  If so, you probably won't be able to resist watching it just one more time.

This simple, yet incredibly amusing video probably surprised the original poster when it went viral.  To date, it's had over 75 million views.

Not surprisingly for something so utterly engaging, some viewers have watched it more than once.

The kitten's name is Atilla, by the way.

Here, for your viewing pleasure is the original, the Animal Planet (TV) version, and a couple of pretty silly parodies.

How many times have YOU watched Surprised Kitty?

Homage to My Favorite "Breed"

and What They are Made of

Coir Welcome Mats
Coir Doormats - They're considered one of the best ways to wipe dirty feet. Do you know where coir comes from? Find out and see a cool selection of doormats
Updated: 08/01/2017, CruiseReady
Thank you! Would you like to post a comment now?
8

Guest Book for Your Comments

CruiseReady, Me too, I love rescues, shelters and strays.
So do kittycats that get stuck in trees, like in the funny episode in The Ladykillers with Tom Hanks, somehow go beyond what the tail length would predict in terms of jump height?

Well, I don't think it's an exact, to the millimeter, predictor, but it can give you a general idea of his or her ability

I didn't know about their tail length determining jumping ability.

Marie - My Walker likes to 'help' me. He's sprawled on the desk right now.

sheilamarie - I thought just about everyone on the world had seen that surprised kitty video. Glad to have been able to show it to you. It sure is cute, isn't it?

dustytoes - that's one of my favorite 'cat facts.'

I can definitely relate to the cat and its housekeeping staff! Our puss is very pampered for sure. Love these mats.

That is interesting about right and left-handed (pawed).

It certainly would be a very appropriate sentiment at our house! Walker knows that, without a doubt, he is the king of this castle!

Welcome mats for the friends of man's best friend, the dog. These dog door m... 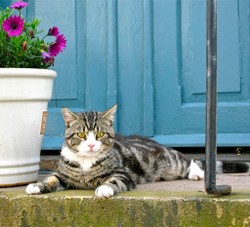 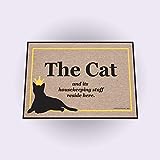 The view of a long time cat lover on indoor cats and outdoor cats and which kind is best for each environment.
42%  4   4 CruiseReady
Other Home Decor 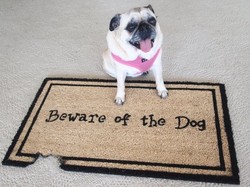 Welcome mats for the friends of man's best friend, the dog. These dog door mats are ideal for the front and even back entry ways of the homes of dog lovers.
Loading ...
Error!