CS Lewis synchronicity and the trees of Mars

Many people see synchronicity in their lives, those moments of coincidence that have significance and seem much more than random chance.

C.S. Lewis was an Irish author and writer probably most famous for The Chronicles of Narnia , a series of books in which children visit another world and where a war between good and evil is taking places and God is represented as Aslan the lion.

As a child I never had any liking for church or prayers or anything to do with the Christian religion that my school taught but when I first discovered Lewis' work via The Lion the Witch and the Wardrobe all of that was to change.

Fiction with a spiritual message

I read all the other Narnia books and reread them and am about to again now. They were a form of spirituality that made sense to me and still do. I was so influenced by the Narnia books that one of my only son's Christian names is Aslan.

Lewis, who was a very good friend of J.R.R Tolkien, was a Christian writer, and although I would by no means describe myself as a Christian, I understand his books so well and believe they have an important message that I can relate to. It is not just the The Chronicles of Narnia , which are some of my personal favourites, but also his science fiction trilogy, also known as the "Space Trilogy," which are set on Earth, Mars and Venus.

Buy the Chronicles of Narnia

Buy Out of the Silent Planet

In the Space Trilogy

Out of the Silent Planet

The first of these is Out of the Silent Planet (1938) in which the hero Dr Ransom is kidnapped and forced to go to Mars in a spaceship by the evil scientist Dr Weston and his accomplice, Devine. They intend giving Ransom to some Martian beings known as Sorns, whom they believe will sacrifice him. Weston is after gold on the planet and also intends wiping out the native beings and making it a human world from which he can conquer the rest of space. Humans and science are the rulers of the universe in his mind.

Ransom escapes on Mars, or Malacandra as it is called, and meets with and befriends the Hrossa, the Sorns and the Pfifltriggi, who are the races of beings that live on the planet as well finding out about the Eldila, who are like angels or other dimensional spirit beings. All the life forms on Mars look to a leading eldil known as Oyarsa and above him there is a being called Maleldil, who is the equivalent of God.

Ransom learns that all the beings that live on Mars live in harmony presided over by Oyarsa, and that Earth is known as Thulcandra, the Silent Planet, which is ruled by a "Bent Eldil," who is clearly representing the Devil.

Space, as such, is full of life and the domain of the eldila and Earth has become a planet that is the odd one out in the solar system because of its "bent" ruler. Wikipedia describes the situation as follows:

"Because the eldila, who fill space (or "the heavens," which are depicted as warm and bright under the influence of the Sun) know nothing about what goes on inside those boundaries, Earth is called Thulcandra, "the silent planet". While Earth has fallen into evil, Mars has not. This represented one of Lewis's concerns about space travel: that fallen humanity would have nothing to offer other life in space other than our depravity."

The coming of the Nephilim

In view of this it is not surprising to find that author and alternative historian Michael Tsarion lists Lewis as a highly recommended author. Tsarion believes this planet was taken over by an evil alien race - the Nephilim of the Bible - who interbred with humans and became imprisoned here and are in quarantine for the safety of the other worlds, but who seek to esape and spread their evil thoughout the universe.

In Out of the Silent Planet , Mars has vast forests of very tall trees and oceans. As in the Narnia books the animals are all portrayed as good beings. Without going more into the story, I will just add that in the end the humans are sent back to Earth for the safety of the life on Mars.

I had just read Out of the Silent Planet again when I happened on a blog at Myspace by my friend Saint of Circumstance. And here is where the synchronicity was amazing - his blog was about the NASA photos of a lake and huge trees on Mars. Google "trees on Mars" and you will find loads of info on this.

In the next book Perelandra or Voyage to Venus (1943), Ransom and Weston end up on Venus, where again, Ransom meets the friendly beasts, such as a dragon, and inhabitants of Perelandra, including the Green Lady, who represents the Biblical Eve in another Garden of Eden. Weston is cast as working for the Devil, and he does all he can to lead her astray, He actually becomes the "Un-man" when he is possessed by the Bent One's spirit. It is against this evil that Ransom must battle against incredible odds. He knows that is why he is there and what is at stake.He must prevent Weston bringing evil into Perelandra.

The third book in the series is That Hideous Strength (1945) and set on Earth.

They are just as good though different of course! The Narnia books I have read over and over and am reading Prince Caspian at present.

The Chronicles of Narnia were also a favourite of mine while growing up. And, while I had a sci-fi stage in my 20s, I never did read Lewis' other books even though they were on my list of to-reads. Maybe I'll go back and do that now.

In my opinion it is a brilliant book!

I will need to read out of the silent planet now. I heard of it, but based on your recommendation I think I shall. 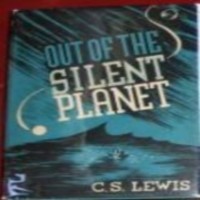 The Chronicles Of Narnia: The Lion, the Witch & the Wardrobe
26%  2   3 BardofEly
Fantasy

Author Kit Berry has written a series of very popular books set in the world of Stonewylde, a world of magic and mystery.
26%  2   3 BardofEly
Other Celebrities

C.J. Stone, or Christopher James Stone, to give him his full name is an author and journalist who has written for a number of well-known newspapers including The Guardian
Loading ...
Error!