What to see and do in Icod de los Vinos

Icod de los Vinos is a city in the northwest of Tenerife in the Canary Islands and it is famous for its 1,000-year-old dragon tree, which gets visited by countless tourists.

Icod de los Vinos in the northwest of Tenerife is famous for an ancient dragon tree, which is said to be 1,000-years-old, but there is much more to see and do in the city. But before we look at some of Icod’s many attractions let us first take a look, in more depth, at why it is known as “The City of the Dragon Tree.”

The world famous dragon tree known as the “Drago Milenario” stands proudly in its own park called Parque del Drago. It is said to be 1,000-years-old or even as much as 3,000 but far more conservative estimates put its age at around 650 or even less. It is impossible to say for certain with dragon trees because they do not have rings inside the trunks that are the usual means used for dating a tree.

Whatever the true age of the tree is, it is a magnificent specimen with a massive head of branches that fans out above its gnarled trunk.  The Drago Milenario is what most of the tourists come to see when they arrive in Icod de los Vinos, and there are many tour companies who run excursions that include this mighty tree in the sights to be seen on their tours.

Some tourists on holiday in Tenerife find self-catering apartments in the area or elsewhere on the island. Anyone staying in Tenerife on holiday or as a resident has more time on their hands to explore a location like Icod de los Vinos much more fully, and there is certainly plenty more to see in Icod.

By the way, there is a small charge to enter the Parque del Drago to see the mighty dragon tree up close but this is worth paying because the park has a fascinating collection of endemic shrubs, trees and flowers, as well as caves showing how the Guanche people once lived before the Spanish Conquest. There are pathways around this park, ornamentals ponds, seats to sit and relax on, and a collection of smaller dragon trees.

As well as the Drago Milenario, that you have to pay to see at close quarters, there is another very old and very big dragon tree in a small square just up the hill. This one is free to see and, in many ways, just as impressive. It has a colony of bees nesting in its tall trunk, and another massive head of smaller branches fanning out above it.

The Plaza de Lorenzo Cáceres is the name of the square nearest to the dragon tree park and it is also where the Church of San Marcos is situated. This church is worth visiting because it has a Museum of Sacred Objects inside. There are many interesting trees and shrubs in and around the square, including a grove of purplish-blue-flowered jacaranda trees and a massive Australian banyan tree with huge trunks created from its many aerial roots and tangled mass of branches above.

Plaza de la Pila is also very close to Parque del Drago and has a small botanic garden of flowers and ornamental shrubs and trees. Surrounded by historic buildings and grand old Canarian homes, this traditional square is considered one of the most beautiful in the Canary Islands.

Herbs of the Sun, Moon and Planets

On the edge of a street below these squares, and again near to the Drago Milenario, is an indoor Butterfly Garden known as the Mariposario del Drago.

These gardens have a large collection of living butterflies and massive exotic silk-moths flying freely around amongst the plants and small trees.  The Mariposario breeds many species and it is possible to view all stages of the life-cycles of these fascinating insects. There are cages with caterpillars eating food-plants in vases and chrysalises hanging in rows waiting to emerge.

Small birds also live in these gardens and there are pools with koi carp too. Downstairs from the garden is an exhibition space and cinema where they show films about butterflies and insects.

There is an admittance charge but it is worth paying to enjoy these gardens that will live in your memories of Icod de los Vinos.

Just a few kilometres out of Icod del los Vinos is a charming seaside village with a black sand beach known as Playa de San Marcos. There are regular buses between Icod and San Marcos and it is a great little beach to visit. It is sheltered by cliffs and has a promenade with restaurants and bars. There is a little church and supermarket in San Marcos, as well as a cultural centre and small square but not a lot more. There are apartment blocks and houses for the residents of this quiet village in the Icod area. A visit to Playa San Marcos makes a great way to relax and finish your day after seeing the sights of the city of Icod de los Vinos.

Yes, I agree, and the older they get the more interesting they can look! Thanks for commenting!

It is amazing how long a tree can live. 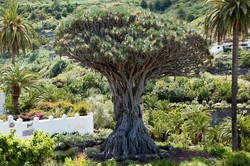 Wizzography for The Bard of Ely whose real name is Steve Andrews. Here you can find out more about him.
100%  9   28 deaniewrites
Spain 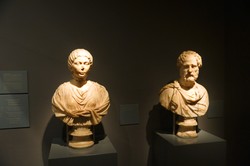