Is it a bird, is it a plane, no it’s a Lego Superman coming to your Lego collection soon, along with other DC Super Heroes such as Batman, Wonder Woman, the Green Lantern and more.

At last Lego and Super Heroes have combined forces on a mission to serve and protect playrooms around the globe and keeping evil doers at bay – what Lego Super Hero will you choose first?

The first five Lego Super Hero Sets are due to hit the shop shelves in January 2012, but why not pre-order online to be sure you get them as soon as is humanly possible?   At the moment pre-orders are not available, but as soon as they are I will have the links on this page so bookmark it and check back often.

Here are more details about the first sets to be released.

According to the official website this Lego Super Hero set will include 89 pieces and is recommended for ages 5-12 years.

The set will include Batman with a jet pack on his back in place of his usual cape.   The set will also include Catwoman with a purple motorcycle aka her catcycle.   What makes the catcycle stand apart from other Lego motorcycles is a black Lego piece that attaches to the back to give the illusion of a cat’s tail.   Then of course there’s the clip on the side of the catcycle where Catwoman can attach her whip while she’s speeding along with Batman in pursuit.

This set contains 690 pieces and includes five minifigures, according to the release information it is recommended for ages 7-14.

The Lego characters available in this set are Bane, Batman, Poison Ivy, Robin and Bruce Wayne.   This Batcave set also contains the batcycle and Bane’s drill, but what else is in the Batcave?

Well there is Poison Ivy’s cell, the Bat-Gear weapon arsenal, the all important red bat-phone and of course the bat computer.

This set is a must have for any Batman Lego fan, will Bane be able to free Poison Ivy today or will Batman and Robin end up capturing him as well – the question can only be answered when playtime is over!

If you prefer Superman to Batman then you’ll need to get this 207 piece Super Hero Lego set.   Recommended for ages 6-12 it includes three minifigures – Superman, Wonder Woman and Lex Luthor.

The entire set consists of a robot that Lex Luthor made – there’s a cockpit in the robot’s chest which is where Lex Luthor controls the robot’s moves.

In the publicity photos on the box it looks like the Robot is holding Wonder Woman captive in one hand while banishing a ray gun in the other.

The gun seems to be attached to a transparent hose leading from a glass case which I’m assuming (as it has green contents) is supposed to be full of kryptonite.

Basically it seems that Superman has to try and disarm the robot controlled by Lex to free Wonder Woman, but he has to do it while avoiding being blasted with Kryptonite – the action never stops when Superman and Lex Luthor are in town!

This Lego Super Heroes set contains 278 pieces and is recommended for ages 7-14 years.

The Lego minifigures included in this Super Heroes set are Batman, the Joker and a Joker Henchman.

Other things included in this set are the Batwing and the Joker’s Helicopter which makes this set sound like the #7782 Batman Lego set from the 2006 Batman theme.

The four minifigures included in this set are Batman, Two-Face, Two-Face’s henchman and a police officer.   Other things in the set include a bank, the bank safe, the Batmobile and Two-Face’s getaway car which leads me to only one conclusion – Two-Face has robbed a bank and Batman has answered Gotham City’s cry for help and is attempting to stop him and return the proceeds from the robbery back to the bank!

Hold the batphone Batman as there are three more Super Hero Lego sets available to purchase right now!   The Lego Ultrabuild Batman is the first one available with 40 pieces this is an easy, yet fun build.   You can also get Batman's nemesis as well with the second set now available - the Ultrabuild Joker, yes the one and only bad guy who seems to be a favorite villan for many people.

The third set that has recently been released is another ultrabuild set and is the Green Lantern.

The great thing about these sets is that you can actually combine some of them to make a bigger size Batman or Green Lantern which is pretty awesome.   Read more details when you click on the products below.

There are more Super Hero Lego sets due to be released later in 2012, some in May and some don’t have release dates at the time of writing.   The other ones are – 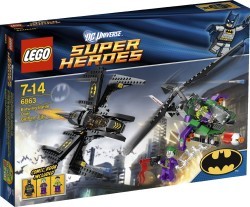