Until 2012, the only British monarch ever to have reigned for 60 years was Queen Victoria. Celebrations were held by a fifth of the world population.

On June 20 1897, Queen Victoria became the first British monarch to celebrate sixty years on the throne.

As Britain was at the height of its Empire, she also reigned over a total of 458 million people - a staggering fifth of the world's population at the time.

Her full title was Her Majesty Victoria, by the Grace of God, of the United Kingdom of Great Britain and Ireland Queen, Defender of the Faith, Empress of India; though contemporaries would have referred to her as Her Imperial Majesty The Queen-Empress Victoria.

How was the Diamond Jubilee Celebrated in 1897?

With no precedent at all, the Victorians had to start a whole new standard in royal protocol.

Queen Victoria's Diamond Jubilee was celebrated as a festival across the British Empire. The two were interconnected, at the Queen's suggestion. She wanted the culmination of six decades on the throne to jointly be a glorification of her nation's global power.

This was Britain's Imperial Century, when the country's superpower status was barely challenged. The map of the world was splattered with red, as more and more territories came under Westminster's control. Victoria was monarch of them all.

On June 20th 1897, the day that she actually marked sixty years as queen, church services were conducted in her honor, wherever British rule held sway. It was Sunday.

The grandeur really came a couple of days later, when national holidays were declared throughout the British Empire. June 22nd was the date which many at the time associated with the Diamond Jubilee, because that's when they had the parties. If possible, it was also the day when as many of her subjects as could make it descended upon London.

There was a six mile procession from Buckingham Palace to St Paul's. Victoria's honor guard included troops and military officers, who had sailed in from around the world. Jamaican Artillerymen marched alongside New Zealand Mounted Troops; Bengal Lancers marched with the British Escort of the 2nd Life Guards, with many more besides. 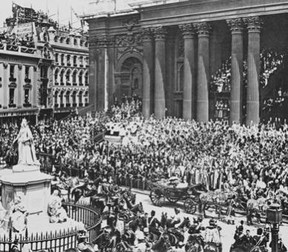 The following day, the Daily Mail newspaper ran a report which read, 'Up they came, more and more, new types, new realms at every couple of yards, an anthropological museum – a living gazetteer of the British Empire'.

Of course, in their midst was the Queen-Empress herself. She sat with members of her family in an open top carriage, cheered by crowds all along the route.

Their destination was St Paul's Cathedral, where a service was heard in thanksgiving for her reign. It happened outside, without Victoria ever alighting from her carriage.

This was not really out of respect for the thousands who would not have fit inside. It was because the Queen's advanced years (she was 78) had brought with them crippling rheumatism. She couldn't climb the stairs into the cathedral without much agony and a loss of grace. This way she kept her dignity, while the eyes of the world were upon her.

Buy a Victorian heirlooms, already over a century old and gaining value fast.

If you had a time machine, do you wish you could have been there?

Many of the Diamond Jubilee celebrations focused on food. But the sumptuous meals weren't only for the world leaders. 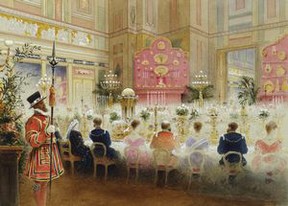 The prime ministers of all Victoria's dominion states were invited to attend a Grand Banquet in Buckingham Palace. None of them had come empty-handed and amongst their gifts, each arrived with an orchid grown in their country.

These were collected into a 9ft floral arrangement in the shape of a crown. It symbolized loud and clear who was the boss, especially since it was positioned behind the Queen's table.

The flowers weren't the only imports that night. Twenty-four chefs had been brought in from Paris, in France, to create dishes fit for the occasion. Apparently they left a short-lived fashion for curled mustaches, amongst the young male apprentices who saw them!

Queen Victoria was quite a fast eater. While banquets were supposed to go on for hours, she could wolf through several courses in just half an hour. It must have caused a lot of diplomatic confusion, as heads of state followed protocol in only eating when she did.

Once the food had all been consumed, it was time for the evening's entertainment. This was a magnificent fireworks display, hosted in the grounds of Buckingham Palace.  Victoria was wheeled out in her chair, surrounded by princely escorts, to watch it.

Meanwhile, it wasn't just the rich and noble who were enjoying massive meals. Alexandra, the Princess of Wales, organized a series of charity banquets to give the poor a taste of royal fare. 700 tons of food was prepared by 10,000 waiters, in order to feed over 400,000 impoverished Londoners.

It might have been Princess Alexandra's idea, but the money to fund it came from millionaire Sir William Lipton!

Taking her lead, several cities across the British Empire staged their own banquets for the poor, organized by noble ladies wishing to emulate royalty. No doubt the poor were just glad of the free grub!

Queen Victoria at her Diamond Jubilee

Buy your own poster of one of the world's most famous monarchs at the height of her power.

Thank you! Elizabeth isn't too far behind. Only three years to go!

A great page- during this year's jubilee celebrations I think its important that we reflect on the amazing achievements of Victoria's (as yet) unbeaten reign :)

If you get a time machine, I'm coming with you. I'd be hard pushed to choose just one or two places to go. My first thought is Iron Age Britain, though I wouldn't say no to megalithic, bronze age... oh! Wow! Yes! I want my time machine to be airborne, so I can see the last great ice age melting and forming the British Isles.

I'm assuming that I won't be allowed to collect and bring a velociraptor for any of this. 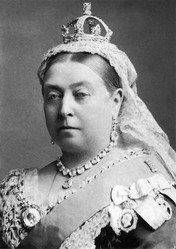 She was the daughter of the poet Byron. But history knows Countess Lovelace much better as a mathematical genius and possibly the first computer hacker.
100%  34   10 JoHarrington
Victorian Era

Less divorced from death than we are today, the Victorians took keepsakes that modern sensibilities would find too shocking to contemplate.
Loading ...
Error!