The state of Virginia announced it is the first state to end veteran homelessness housing 1,432 veterans since October 2014. Are they a model for other states to follow?

When Virginia Governor Terry McAuliffe announced an end to veteran homelessness in the state, many charities serving the veteran community shook their heads in disbelief. Technically, Virginia has reached what is termed "functional zero" or a functional end to the homeless problem among veterans as defined by the government. What this means is Virginia has coordinated with programs and organizations across the state to address the needs of homeless veterans. It doesn't mean all veterans are off the streets.

The Mayors Challenge and Homeless Vets

First Lady Michelle Obama along with the HUD Secretary and leaders across HUD, VA, USICH (United States Interagency Council on Homelessness), and the National League of Cities issued the Mayors Challenge calling for mayors, county leaders and governors across the United States to end veteran homelessness by the end of 2015.

HUD statistics say there are approximately 49,933 veterans homeless on the street on any given night. The U.S. Department of Veterans Affairs (VA) states the nation’s homeless veterans are predominantly male, with roughly 8% being female. The majority are single; live in urban areas; and suffer from mental illness, alcohol and/or substance abuse, or co-occurring disorders. About 12% of the adult homeless population are veterans.

According to the National Coalition for Homeless Veterans, "a large number of displaced and at-risk veterans live with lingering effects of post-traumatic stress disorder (PTSD) and substance abuse, which are compounded by a lack of family and social support networks. Additionally, military occupations and training are not always transferable to the civilian workforce, placing some veterans at a disadvantage when competing for employment."

The goal then of the Mayors Challenge was to address the needs of veterans such as finding safe, secure housing, providing nutritional meals, addressing substance abuse issues and care, mental health counseling, job assessment, training and placement assistance.

How Virginia Responded to the Challenge

In January 2015, the city of New Orleans announced they had ended veteran homelessness. UNITY of Greater New Orleans, the lead agency responsible for coordinating all homeless housing and services in the area, worked with 60 nonprofit and government agencies to meet the mayor’s deadline and by the end of 2014, 227 homeless veterans were off the streets.

Virginia used New Orleans as a template for their state. Hunter Snellings, director of programs at the Virginia Coalition to End Homelessness, stated in an interview with WTVR-Richmond, charitable and service organizations across Virginia coordinated their efforts. Matt Leslie, director of Housing Development for Veterans services (in the same interview) credited state and federal agencies with leveraging relationships and sharing data to develop a unified approach to meeting veteran's housing needs.

While many critics say this a step in the right direction, there are still a number of homeless veterans using shelters and food lines and who lack the skills or ability to gain employment.

“Our brave men and women do not get to claim a functional victory on the battlefield and we shouldn’t either,” Cox said in a written statement. “Our battle isn’t won until every veteran has the education, health care, job and home they deserve. We look forward to working with Governor McAuliffe to continue these efforts.”

For now, the consensus in Virginia is that this new collaborative approach is working. The only homeless vets, according to Governor McAuliffe, are the ones who have refused the services offered to them and any homeless vet who requests it will receive housing in 90 days.

A flag display case is a great option whether you have received a burial flag... 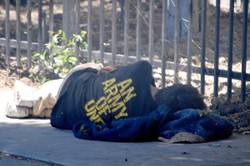 A flag display case is a great option whether you have received a burial flag for a deceased Veteran, or just want a decorative way to display a flag indoors.
Loading ...
Error!