Miss the days of hunting and gathering where you just ate what you found and were thankful for it?

Life was simpler in the old days. We were born, we learned survival skills, we hunted animals, we gathered plant life, we ate, slept, bred, and eventually we died. No governments, no taxes, no mortgages, no workplace-induced stress, and no science. Decision-making was a heck of a lot easier.

These days, our lives are considerably more complex. In the modern West, 'survival' takes on a whole different meaning. The average, healthy adult doesn't have to struggle to survive in the life-death sense. There is a blur between needs and wants, and shoulds and shouldn'ts, and the relatively basic task of feeding ourselves has become infinitely more complicated.

Even if we are sensible about controlling our access to information bombardment, there is still the output from deliberate, self-initiated searches to deal with. Choosing to look up a topic can result in a mountain of usually conflicting information.

Within the realm of diet and nutrition, things get really confusing. Eating healthily doesn't seem like a simple activity anymore, and we see this evidenced by the growing field of nutrition research. Experts explore the science of food to find out how we process food, the relationships between nutrients and disease, and what the optimal diet is for the average human being. The implications of this research are far-reaching, and journalists, food and supplement companies, and the medical establishment lie in wait to receive and process the latest result for public consumption.

Does this help us make good decisions?

Raise your hand if you've ever read the latest nutrition headline and made changes to your diet based on the journalist's summation of new findings.

Initially, most people might say that they read food articles skeptically. Most people have some kind of understanding that reporting, whether in magazines or newspapers, is designed to make money first and foremost. Boring headlines don't sell.

But scary ideas do.

You don't have to be scared to be sold on an idea. Nutrition reporters and food and supplement companies can also hook you by playing on your deepest desires or major weak spots. Who doesn't want to lose weight or build muscle to look good for summer? Who doesn't want thick, shiny hair? Perfect skin? More energy? Sexual stamina?

Again, all it takes is a whiff of a link between food research findings and an effect on those things we wish so dearly to improve or hold on to. You've got a story worth reporting on, and an avid following.

The Realities of Nutrition Research

The human body and how it is affected by food is extremely difficult to study. Why? One important aspect of good, scientifically sound, controlled studies is that you are able to control many of the variables you are studying. Think of a bacterium in a petri dish in a lab. Highly controlled environment monitored by the scientist.

When you study humans, you have very little control over their behaviour, their lifestyle, their stress levels, their relationships, how their bodies work, and a whole host of other things that make up human functioning. You might be able to have some control over what they put in their bodies and can select people based on some demographic variables like age, sex, and general level of health, but that's about it.

The less you can control the variables that affect the outcome, and the greater the number of uncontrolled variables you have, the less able you are to draw conclusions about what you have studied. In this way, results from nutrition studies are rather limited in their predictive and conclusive power.

It would be irresponsible to make a grand pronouncement about a food to the public based on a few limited nutrition studies.

How Do Nutrition Articles Affect Your Decision Making?

Be sensible about your diet. Nutrition articles are fun to read, and it can be irresistible to jump on the band wagon when a new great 'super food' is discovered. But keep in mind that the headlines based on one study will likely change in some way after the next study is done.

Our bodies like consistency and they like balance. The best thing you can do for yourself is eat a variety of fresh foods, get enough healthy calories for your activity level and bodily needs.

Leave the articles for entertainment purposes only.

Reading about nutrition is truly fascinating. There is so much we still don't know.

So true. I think some people find interpreting what they read so frustrating as a result. The health of one's family is so important that unclear and mixed messages can make decision-making about food and health incredibly difficult.

Same here - I can get lost in the details. Fascinating! Eating well should be simple, but when choice is introduced into diet, there is a lot to explore and understand!

Nutrition is a aspect of the human condition I've always been fascinated with. It's amazing how we can control our health and well being by eating properly and for healing, prevention I always take note of new nutritional information, I research it for myself but it always gets my attention. :)K 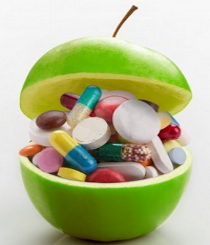