Ed Wood was a cult film director famous for Plan 9 From Outer Space. Bard of Ely filmed a tribute.

Introduction to Unusual Shopping
Unusual Shopping is a short film, with the screenplay written by Steve Andrews aka the Bard of Ely, and also starring and directed by him. It was made in 1997 while he was studying for a Diploma in Media Studies at Coleg Glan Hafren in Cardiff.
Unusual Shopping is intended as a humorous tribute to the cult B-movie director Ed Wood who was famous for films such as Plan 9 From Outer Space. Director Tim Burton made a popular tribute entitled Ed Wood in 1994, and starring Johnny Depp as the eccentric film-maker.
Ed Wood used to often take part in several roles in his film productions such as actor, director, producer and screenwriter and so Unusual Shopping makes reference to this too.

Find out more about Ed Wood

A tribute to Ed Wood

Unusual Shopping was filmed on location in what was then known as Robert's Emporium, a fleamarket and antiques store run by Bard of Ely's good friend Jah Scouse, who is a television actor and musical entrepeneur, Jah Scouse plays the part of the shop-keeper, which he was in real life anyway.

However, in Bard of Ely's film a customer, played by the Bard himself, is looking to buy a most unusual item because he wants a spaceship or spacecraft. Bard of Ely is sporting a conspicuous Ed Wood T-shirt that actually came from the shop.

The spaceship prop makes reference to the theme of aliens on Earth in Plan 9 From Outer Space, which after years of obscurity, was made famous for all the wrong reasons when in 1980 the authors Michael and Harry Medved called it the "worst movie ever made." Ed Wood was awarded the Golden Turkey award for this film.

The Truth is revealed

The spacecraft he is sold is a part of Bard of Ely's live set at gigs and is known to his fans as the "Mothership." In actuality it is a plastic toy flying saucer that was made in Taiwan and the Bard makes a joke about revealing where the aliens and the UFOs come from - the Planet Taiwan.

The Mothership has a sound effects unit and a microphone and it is possible to speak or sing through it. This is what happens when Bard of Ely asks if he can try it out and then performs his UFO Song.

What Shall We Do With A Flying Saucer? by Bard of Ely

An actor from the cult film

One of the original actors in Plan 9 From Outer Space was Swedish actor Tor Johnson, who was a bald man, and Jah Scouse is a visual link to this because he also has no hair. In the 1959 science fiction/horror film the plot revolves around some alien beings who plan to resurrect dead bodies of Earth people as zombies or ghouls. Johnson played one of these.

Maila "Vampira" Murmi also stars in the original film, and earlier on in Unusual Shopping the camera zooms in on an image of her that just happened to be amongst all the weird collection of stuff on sale in the Robert's Emporium shop.

By a strange coincidence it just so happened that not only did Jah Scouse bear a passing resemblance to Tor Johnson but he also had various items for sale in his shop that had something to do with the Ed Wood's film, and so the location was perfect.

Ed Wood's films were made on a budget and have often been criticised for the very poor special effects, sound quality and general production values but this has helped give the director the cult status with which he is regarded. Bard of Ely's deliberately amateur production makes reference to all this as well and as part of his tribute.

Unusual Shopping - a tribute to Ed Wood by Bard of Ely

The Bard of Ely, the Mothership and Jah Scouse

Bard of Ely chose several songs by friends to use as the soundtrack for Unusual Shopping, including "Lost in Space", a track by the underground band The Conspiracy, and "Edward D. Would", a song by humorous singer-songwriter Steve Stone.

He ends with a sample from the "Martian Hop" by The Ran-Dells. This was a song that Bard of Ely first encountered when he was just 13 and went to the Junior disco at Cardiff's Top Rank dance venue. When the song used to be played everyone formed a circle, joined arms and jigged to the music as the lights of the club were flashed on and off. The song made a big impression at the time so seemed just right for Unusual Shopping.

The Ran-Dells - Wikipedia, the free encyclopedia

Thank you, Katie! No, it's the Mothership! not a smoke detector - you cannot sing through one Mu-Mu land!!

Love the video, the dreads or braids are cool. Action, Action, this is going to be the place. Cut, a spaceship, looked a bit like a smoke detector, oh how i wonder why! Got so caught up in the entire UFO bit, Tywan, is it???

UFOs used to be more often known as Flying Saucers and there are countless th... 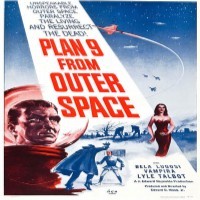 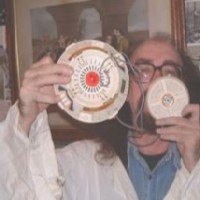 UFOs used to be more often known as Flying Saucers and there are countless theories and beliefs about them. Are they alien craft?
45%  6   4 BardofEly
Wizzographies