The Chinese Room have announced plans for an Apocalyptic story-based game. It's the natural successor to Dear Esther.

The world is ending; and you're stuck in an isolated village in rural Shropshire. All around you, people (or their trace memories) are preparing for the end of time.

Dear Esther fans are going to love it! And well they should, as it's made by the same people. They are building upon the ideas that turned their first game into a worldwide hit.

The Chinese Room is releasing Everybody's Gone to the Rapture in Summer 2013, so what can we expect?

Gaming Until the End of the World

The Chinese Room takes us on another journey. This time into the Apocalypse itself.

The Rapture is coming.  In just an hour's time, the whole world will be deserted. What will you do in your remote Salopian village?

Like Dear Esther, there are stories to be told here. Six characters are playing out their final minutes and you will be able to interact with them.  Or not.  The options are there, as they will do their thing regardless of your involvement.

It will be within the realms of possibility to just stand there, and let events unfold around you. But your actions would influence those you encounter.

Six people.  To interact or not to interact.  That's twelve different ways to experience this story straight away.  There may be more.  We don't know, as yet, whether there are multiple routes through each interaction.

Everybody's Gone to the Rapture is designed to be played over and over again.  Gameplay is locked into just one hour, which means that a single sitting won't cover even one full eventuality.

What does transpire is your own apocalyptic tale.

Delusion or Reality? Dear Esther Takes us on a Journey
Dear Esther is a PC/Mac based adventure. Story-based, and each play being completely unique, it changes the rules of gaming.

What is The Rapture?

The Rapture is an apocalyptic state, as least from the point of view of those on Earth.

Rooted in Christian lore, it is mentioned in the Biblical verse: 1 Thessalonians 4:17.  From the King James Bible, that reads:

Then we which are alive and remain shall be caught up together with them in the clouds, to meet the Lord in the air: and so shall we ever be with the Lord.

Great news for the Chosen Few. Terrible news for us Pagans.

The Rapture received a lot of publicity in 2011.  A Christian radio broadcaster named Harold Camping convinced many followers that the prophesied event  was imminent.

It proved to be false, but the resulting furor may have inspired its inclusion in this game.

More Information About Everybody's Gone to the Rapture

Everybody’s Gone to the Rapture – Dear Esther’s successor
An interview with Dan Pinchbeck, creative director of The Chinese Room, about their latest game.

Everybody's Gone to the Rapture
Announcement about the game from the website of The Chinese Room.

Books about The Rapture

This Biblical event is name-checked as the cause of the end of the world in the new game by The Chinese Room.

The novels of John Wyndham and John Christopher have been given a nod. 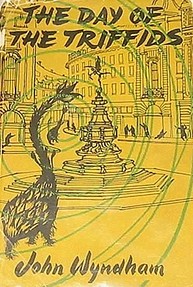 If the endless (and fun) internet debates about the storyline in Dear Esther are anything to go by, then fans will be doing the same with this latest game too.

We'd better cram on our knowledge of the influences on it then!

Dan Pinchbeck told Beefjack that, "The concept of (Everybody's Gone to the Rapture) is this almost ’60s-’70s Brit science fiction – this John Wyndham, John Christopher kind of thing – of how the end of the world would be responded to in a rural English location."

And if you aren't capped?  Then you don't get to easily survive for long.

John Wyndham wrote a couple of post-Apocalyptic novels.  The Chrysalids focused 1000 years in the future, after some terrible event practically wiped out humanity.  While the hardline societies that formed from survivors saw it as a punishment from God, the reader is left pondering about a nuclear catastrophe.

In The Day of the Triffids, giant and aggressive plants attack humanity.  It's made more terrifying by the fact that they are no longer rooted in the soil.  The situation is compounded by the fact that most of the human race are rendered blind. They had watched a strange meteor falling. Civilization collapses around them.

Of the three, perhaps The Chrysalids has more resonance.  We will have to wait and see how far any of these stories have inspired elements in the game.

Dan Pinchbeck has implied that his game will be recreating the spirit of them, if not more.

What Do We Actually Know About Everybody's Gone to the Rapture?

Keep checking back, as I'll add to this as I find out more.

You need to kill time, you need entertainment. Refer to our website. Hope you get the most comfort. http://wordcookiesgame.com/
http://hillclimbracing-2.com/
http://fivenightsatfreddys-4.com/
http://hotmailcomsignin.email/

Sometimes even the biggest companies pull a hyped up flop. I was reading last night about the Ford Edsel. It was a car which had a massive, massive build up, but turned out to be the worst commercial failure in history.

It was Blizzard too, so it's not like it was an unheard of company - I have faith in this though since they did such an excellent job with the first.

Oh! In that case, I hope it's not like D3 either then!

It had an absolutely massive build-up and then totally flopped at launch and was terrible!

What happened with D3?

My expectations are really high for this. I'm going to be gutted if it's no good!

I really hope it lives up to expectations. It's rare that something like this evolves from a mod.

Dear Esther is a PC/Mac based adventure. Story-based, and each play being com...

Dear Esther is a PC/Mac based adventure. Story-based, and each play being completely unique, it changes the rules of gaming.
100%  28   14 JoHarrington
Popular PC Games

Want to inspire the whole family to help around the house? Or to establish for once and for all who actually does all the chores? A really fun PC game can help!
Loading ...
Error!