A look back at the 2005 movie Green Street starring Elijah Woods.

Though football hooliganism is nothing like as bad as it was in the 1970s, the 2005 film Green Street, directed by Lexi Alexander and starring Elijah Woods, portrays the thugs as modern day heroes and warriors. Steve Rogerson explains why that in itself makes this a bad film for all but the nutters themselves.

Not often can one say that a film is an insult to all football supporters, but that is exactly the way I felt when I left the cinema after seeing Green Street in 2005. To me, and hopefully to those of you reading this, supporting football is a passion, it is about standing or sitting watching and cheering your team whatever the weather, however badly they are playing. It is about a day out, a pint of two before the game, friendly rivalry, singing and chanting, talking about the game afterwards, in the pub or online, arguing about who was the best player and just how bad was that referee. It is a hobby, it is life, it is fun.

But we all know supporting football has an underside, a dark cloud that has haunted us over the years, tarring us all at many times with the brush of the yobs, those parasites on this lovely game that use and abuse it for their own end.

True, compared with how it was in my teenage years of the 1970s, football hooliganism is today a relatively minor problem. But it has not by any means gone away, and most clubs still have a band of throwbacks who consider football to be a vehicle on which to parade their thuggish tendencies. Even at small clubs such as Shrewsbury Town – the team that I support – they are not immune to the problem; there is still small group of childish louts who occasionally appear singing fascist anthems, thankfully to a chorus of boos from the true fans in the vicinity. The fact that their songs have nothing to do with football is a good indication of their true motives. But they are a very tiny minority and one for the most part isolated from the ranks of genuine supporters.

That is why Green Street riles so much because it elevates this minority into modern day heroes, urban warriors full of loyalty and comradeship.

The Story in Green Street

The plot centres on Matt Buckner, an American student (played by Lord of the Rings heartthrob Elijah Woods) who is falsely thrown out of university. Rather than stay to fight his expulsion, he packs his bags and heads for London to stay with his sister and her husband, who we are later to discover once run one of West Ham United’s football gangs, a role now taken up by his younger brother Pete who befriends Matt.

Pete teaches the gullible Matt about the various firms that are associated with the leading football teams and about the fierce rivalry between his firm and that of a gang from Millwall. When some thugs attack Matt as he walks home, and Pete’s crowd comes to his rescue, young Matt gets a taste for the violence, becomes almost addicted to it.

The story winds its way through a series of male-bonding episodes that sees Matt change from an outsider to one of the gang. We witness a ludicrous, totally unbelievable tale of what happened when the firm visited Manchester and we learn how the young son of one the Millwall thugs was killed in a fight many years ago between West Ham and Millwall hooligans.

This all leads up to the inevitable FA Cup draw that pairs West Ham and Millwall together, a Judas like betrayal by one of the West Ham group and the climactic fight scene between the rival nutters.

The result of all this is that Matt, as he explains in a voiceover, learns about moral fibre and standing up for what you believe and thus goes back to the US to fight his expulsion. Those of us who have seen football hooliganism for real were left gaping with shock at this travesty.

The Legacy of Green Street

I sadly suspect that some hooligans will lap this film up, enjoy the 100-minute orgy of violence and walk out feeling their lives now have some meaning. And for that reason alone, this is a bad film. Football hooligans are not heroes, they are not brave and noble as this film portrays, but sad creatures who have yet to grow up and face responsibility, whose only goal in life seems to be to spoil football for the rest of us. They are a shrinking minority whom we all one day hope will disappear for good. Films such as this do not help.

See also How Football has Lost its Violent Past for a look at how films have mirrored the relationship between violence and sport.

SteveRogerson, Thank you for practical information, pretty pictures and product lines.
Are the two sequels in the same vein? 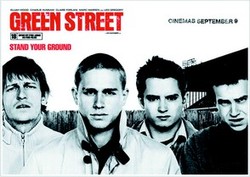