The 40th Anniversary of the Legend of Boggy Creek

On December 6th 1972, an all-time classic Bigfoot docu-drama was released. Chronicling true sightings of the Fouke Monster, the movie has grossed $25 million.

Forty years ago, Charles B. Pierce read about a creature, which had menaced a young family in their Arkansas home.

He borrowed $100,000 from an advertising client and set out to tell their story on celluloid. Pierce had to hire his own movie theater to show 'The Legend of Boggy Creek'.

The documentary style movie was to later earn him millions. It would also launch a film career that would see Pierce write the immortal Clint Eastwood line, "Go ahead, make my day."

The Legend of Boggy Creek on DVD

Buy this movie to learn what all of the fuss is about; and to discover why you should be careful in the forest around Fouke, Arkansas.

A Sasquatch Attacks in Fouke, Arkansas

It had been a frequent visitor around the home of Bobby and Elizabeth Ford. That night, Bobby would end up hospitalized. 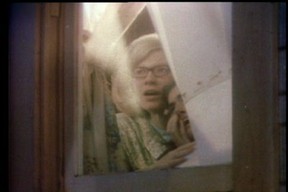 During the evening of May 1st 1971, Elizabeth Ford was sleeping on the couch.

She shared her home with her sister-in-law, Ann, and the brothers they had married, Bobby and Don Ford.  Their children were snug in bed.

Suddenly a crashing from the window screen above awoke her. Elizabeth looked up to find a large, bipedal, ape-like creature looking over her.

She screamed and the animal fled.  This was just the latest in a series of incidents around their Arkansas home, but it wouldn't end there.

All went quiet as the two women cowered in the house with their young children. Once their husbands were home, a full search was made of their property.  It uncovered nothing.  But then the Sasquatch came back.

In the tussle that followed, shots were fired. Bobby Ford thought that he'd hit the creature. (Later blood was found in the area, but no-one thought to collect a sample.)  But it didn't go quietly.

Bobby was grabbed and thrown to the ground. His back was a mess of abrasions. Only then did Bigfoot flee into the forest, leaving Bobby to be rushed to hospital, just over the border in Texarkana.

This was the true story, which made headlines at the time, bringing one young wannabe film-maker to Fouke, Arkansas.  The movie that he shot there made his name.

Watch The Legend of Boggy Creek

It's available on-line as an Amazon Instant Video. The two DVDs here are earlier releases and not as good quality as that shown above.

Charles E. Pierce had little film-making experience, hardly any money (relatively speaking), but a lot of big ideas. It worked. 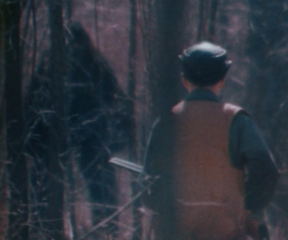 Chuck Pierce had been born in Indiana, but raised in Arkansas. He spoke the language of the people that he sought to interview.

Their candid retelling of their experiences were sometimes the first time that eye-witnesses had gone public.

Pierce filmed it all, staging re-enactments, so viewing audiences could really grasp those dramatic events.

Often the real people played themselves, in the actual locations of their encounters. If it had taken place too far ago, then their children or grand-children stepped in as proxies.

For larger stories, like that of the Fords, Pierce brought in drama students from the University of Texarkana. The whole thing was told documentary style, like the cameras had been there when it all unfolded.

To modern eyes, the cinematography, story-telling and style can appear very dated. At times, it borders upon cheesy.

The inclusion of two songs springs to mind - one a paean to the creature itself and another a ballad about a teenage local going camping.  Though anyone laughing at Hey Travis Crabtree should note that the young man was killed in an industrial accident, a decade after the film was made.

The often jerky confusion of hand-held camera shots renders an intimacy to the proceedings. More home video than Hollywood finesse. It was a technique that was later to influence The Blair Witch Project.

As a snapshot of the lives of poorer families, living in the boggy forests of backwater Arkansas, it remains unparalleled.

Trailer for The Legend of Boggy Creek (1972)

Books about Boggy Creek and the Fouke Monster

What was the Fouke Monster?

The consensus is that it was an Arkansas breed of Sasquatch; or the Bigfoot of the bogs. 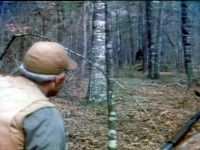 Unlike its more famous Bigfoot cousin in the Pacific North-West, the Fouke Monster only had three toes.  This was attested to by numerous footprints discovered by trackers.

Beyond that, the similarities to other Sasquatch sightings are startling.

The Fouke Monster walked on two legs.  It appeared ape-like and reddish-brown in color. It was covered head to foot in fur.  It was extremely tall, around 7ft-10ft in height.

It wasn't seen just by the residents of Fouke - they were simply the ones made famous by the movie - but in communities up and down the creeks.  As early as 1946, reports of it had come out of nearby Jonesville.  The hairy giant had been seen at intervals ever since.

Often a decade could pass with no sighting at all.  Then a spate of them would occur in a short time. The most recent encounter was in 2011.  It has not gone away.

Boggy Creek was MY Introduction to Bigfoot

The Legend of Boggy Creek was released in 1972 and instantly became a drive-in favorite.

1972 was also the year that I was born.  By the time this movie had had its run and made it onto the television, I was old enough to watch it.

I recall very well sitting with my mother, staring wide-eyed at the screen. I wasn't afraid. I was the sort of ghoulish child that devoured Hammer Horror films and had luminous ghost cut outs on the wall. I certainly wasn't going to worry about a gorilla type thing on the other side of the world.

Instead I felt sorry for the Fouke Monster; and its story kick-started a life-long fascination with Bigfoot.

Watching The Legend of Boggy Creek now is as much about nostalgia for my own childhood, as it is about the story it is telling.

The Legend of Boggy Creek DOES Pass the Bechdel Test

Yes, you did read that correctly. Most blockbusters in the theaters today fail miserably. This movie from before the dawn of Women's Lib passed hands down. 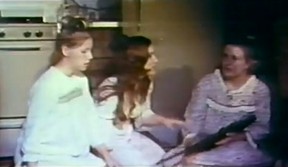 Given that this movie was filmed and released in 1971, the fact that it passes the Bechdel Test might come as a bit of shock.

The voice-over and re-enacted events do appear downright sexist, at least by modern values. But they do reflect the mores of the time.

At the first sight of the creature, the women tend to rush for the protection of the nearest man. If they don't, then the narrator, in all seriousness, tells us that none of this would have happened if *insert male name* had been home.

But, and there are strong buts here, three teenage girls alone armed themselves. They might have screamed a lot about it, but they acted. A mother protected all three of her children without any resource to male intervention. A young woman did become hysterical after her sighting, but it was her mother and sister who dealt with the situation.

None of this is part of the Bechdel Test. For that, we need two or more named women.  Yes, we have several listed.  They must talk to each other.  Yes, that happens on at least three occasions. That conversation has to be about something other than a man. I don't think any of the conversations were about men.

In fact, if the genders were reversed, then the Bechdel Test might have only just scraped by for the male members of the cast.

Buy Sequels to The Legend of Boggy Creek

I can't comment on any of these, as I haven't seen them. In fact, until today, I didn't even know that they existed!

I Watched Return to Boggy Creek

Since writing this article, I've seen the sequel to the classic movie 'The Legend of Boggy Creek'. Here are my thoughts on it. 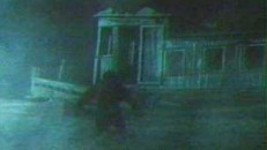 I will never get that time in my life back again.  I used to pride myself on seeing something redeeming in any film.  But that was before I viewed Return to Boggy Creek.

Sequels are never as good as the original (unless we're counting The Empire Strikes Back), but this was painful.  The acting was terrible.  In fact, beyond terrible; it couldn't really be defined as acting.

Told as a straight narrative, rather than in documentary style, Return to Boggy Creek leads with three children living on the bank of said creek with their mother and grandfather.  Past some hurried sub-plot about who can catch the best fish, the kids end up on a boat caught up in a hurricane.

Just when things couldn't get much worse for them, there's a roaring in the darkness.  Guess who just turned up?

Sometimes a movie is so bad that it's good. That's simply not the case here.  My advice is to save yourself the anguish of watching cringe-worthy child actors (one of whom seemed constantly and visibly amused by being in a film) ham their way through a story, which stretches the realms of credibility to breaking point.

Don't say that you weren't warned.

Ten Things I Learned About Sasquatch from Watching Finding Bigfoot
Whistling great apes; a methane stink; childcare research; and bizarre chattering in the middle of the night. These are just some of the hallmarks of this hairy giant.
Updated: 06/16/2014, JoHarrington
Thank you! Would you like to post a comment now?
8

It's the first one that I heard of. That's why talk of this reminds me of childhood, watching this film on the television. I'm very old. LOL

How interesting! I hadn't heard of the Fouke monster.

This brings back memories.

Mainly warn her to keep a camera on her at all times! We need evidence that the Fouke Monster is out there. :)

Whoa, my sister is moving to Arkansas. I have to warn her!!!! 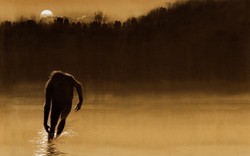 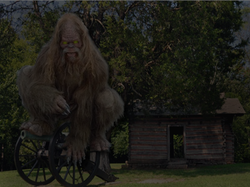 The Civil War Battlefield of Chickamauga is haunted by a tall, hairy, bipedal creature with eye-shine. That sounds more like Bigfoot than the ghost of its own legend.
100%  19   11 JoHarrington
Sasquatch

Has proof of Sasquatch been uncovered in a laboratory in the USA? Dr Melba Ketchum found human ancestry coupled with an unknown DNA in hair samples.
Loading ...
Error!