Ideas for original fractal art gifts that will not break the bank.

If you have friends or family members that appreciate abstract art, you might think that purchasing original artwork gifts for them might be well beyond your budget. Tthat might well be true, for famous, professional artists. However, many independents sell their art on print on demand (PoD) sites, and several online artist communities also sell prints of their members work submitted to them.

Of course you will not be getting a unique piece of art, the images remain to be sold on the site. However, there is so much variety available, that it is highly unlikely that two people who know each other would have the same object.

What is Fractal Art and How is it Created

Fractals are governed by mathematical formulas.  It is actually difficult for mathematicians to agree on a formal definition.  However, visually, fractal art is a geometric pattern in which the same forms are repeated at different scales.  When you zoom in on a part of the image you are likely to see the same, or very similar pattern.

Fractals are seen everywhere in nature, in flowers, vegetables such as broccoli, ferns, the patterns of nerves and blood vessels.  However,creating complex fractal art has only really been possible when computers became generally available.

There are several freeware fractal generators available now, the most popular is probably apophysis.  There are also some paid programs such as Ultra Fractal, my current favourite.  The beauty of this is that normal hobbyists can use them to produce intricate artwork, although mastering the programs does take time and dedication.

You can obviously buy posters, prints and cards with fractal art on Zazzle, and other print on demand (POD) sites.  However there is a large number of other products available, which can be printed with the image of your choice.

Covers for electronic devices seem to be very popular as gifts.  I always see a large increase in these items sold before Christmas.  A nice touch is that Zazzle allows you to personalise the cases by adding a name, or other text to them.  You can do all this under the "customize" it button on the site.

You should be able to find covers for most of the popular electronic devices on the larger sites, definitely for the various types of iPhone, Samsung and Motorola phones, various versions of iPad and for the kindle.

The quality, choice and designs of Zazzle products is excellent.  Unfortunately the price is seriously off putting for many people.  However, you rarely have to pay the full price, since Zazzle has special discount sales and codes practically all the time.

This is particularly true in December before Christmas, when you can definitely pick up a bargain at a seriously reduced price.  If you are buying for another occasion, say a birthday, you might want to plan in advance, and check the site frequently so you can get a good deal on the particular product you've chosen.

Other Products that Would Make Good Gifts

Of course you are not limited to phone or iPad cases (or skins, or sleeves) when you are looking for a fractal gift.

Sometimes you need something smaller and cheaper.  Or you might be buying for a person who disdains modern technology and does not have a smart phone or a tablet.

A large choice of home decorations would make lovely gifts.  I particularly like the clocks on Zazzle, they would look lovely decorating a wall.  If you need a small, cheaper gift, mugs are an excellent idea.  Honestly, there are so many possibilities, I am sure you can find something that will fit your needs.

Of course Zazzle is not the only site were you can buy products with abstract images from independent artists.  There are quite a few other good POD sites out there, which often have the same designs.  You will often be able to find cheaper products there, especially if you are buying accessories for electronics devices.  Below are a few Zazzle alternatives.

An interesting art. Thanks for explaining it.

I love the fractal flowers!

Thank you very much Jo. I enjoy making them.

Some of these pieces are absolutely gorgeous!

I'm sure there are lots of people who would love to receive one these fractal iPhone cases for Christmas, or Galaxy s4- whatever they're using. I'd quite like some fractal art soft furnishings, or stretched canvass!

Thank you very much Hollie. Personally I would not mind if somebody bought me a fractal iPhone case for Christmas, must send family here.

You've offered some really practical advice here- not everyone is aware that Zazzle frequently discounts the cost of goods- heavily at times. And the fractals designs you've illustrated here are truly beautiful, they'll make excellent Christmas gifts, particularity if you're looking for something unusual. 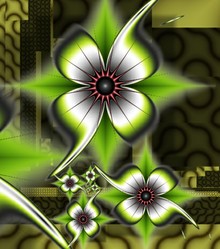