Frank Merriwell was a popular fictional hero in dime novels and magazine serials. He was manly, brave, dashing and a role model for young American males.

A dime novel has come to be a rather generic term. It usually refers to a quickly written, mass produced work of fiction. The popular themes were detective stories and western adventures. The weekly magazines were printed on cheap paper and usually featured only one story a week. Some of the weekly stories were collected together and sold as collections. The prices of these works was anywhere from 5 to 10 cents. The literature was cheap enough that just about anyone could afford it. Boys would buy and then trade the books with other children. So the circulation was actually much higher than you would think.

In his time, Frank Merriwell was an extremely popular fictional character and role model for young American men.. He was the star of dozens of dime novels and hundreds newspaper stories. There were a total of over 900 stories starring the indomitable Frank, but they are little read today.

Frank Merriwell was a college student and football star at Yale University. Harvard University was the great rival of Frank’s school and he treated its students with great scorn.  “You are a cheap cad” is one of the kinder things he every said to a Harvard student.

Frank Merriwell was an ideal that many boys aspired to: he was brave,dashing, manly and successful in every thing he accomplished.

Merriwell was the creation of George William Patten. Patten had been raised in a religious family that shunned any form of violence. Patten didn’t really fit in to the family and he decided to become an author at a young age. His father gave his jut 30 days to make a success of his new profession and surprisingly enough, Patten did. He wrote a couple of stories in less than a week and sent them off to Beadle and Adams, publishers of dime novels. Within a month he got back a check for 6 dollars and his career was launched at the age of 16.

After this, Patten started working for a newspaper and went back to school. He worked hard on his writing, writing about 4,000 words a day, and was soon making a good income writing his novels. Patten briefly concentrated on the popular Wild West theme in his dime works.

Patten was successful for a time, but later he had some problems. Publishers started paying less for submissions and they didn’t need as much material from him, So Patten bounced from publisher to publisher. Wild West themed books were becoming less popular and a new series was needed. Street and Smith contacted Patten and suggested a new series starring a dashing schoolboy athlete. Patten had briefly managed a professional baseball team and he could write fast and well, so a new series was born.

Ormand Smith told Patten some details about the character. The athlete should have a catchy name, they should be modern with American themes. But the supporting characters should speak in dialects, which were popular at the time. There could be some romance, but not too much. The character should be manly and have many adventures. He would be in boarding at school, at first, later college and would travel the world. So the character would be from a wealthy family, well educated and clean living.

FRANK BASED ON REAL PERSON

George William Patten knew just the model for his character; Richard Harding Davis. This was a real person, he was from a wealthy family and became a successful journalist. Davis was famous for his adventures and was considered a model American Male. Charles Dana Gibson used him in his illustrations as a counter point to his popular Gibson Girl. Patten wrote the stories under the pseudonym Burl L. Standish.

The first Frank Merriwell story appeared in Tip Top Weekly in 1896. This 5 cent magazine, printed on cheap paper, was full of stories for young people. Soon Frank Merriwell was one of the most popular characters in the periodical. The stories were also combined and sold as series in book form for 15 cents.

Frank Merriwell was a student at Fardale Academy. He was a star athlete on the school baseball team. Frank was famous for his pitching ability. He could throw a ball to the plate, that curved one way, then another, making it impossible to hit. After a few years, Frank was accepted at Yale, where he was the greatest athlete the school had ever seen. The rival schools continually tried to stop him from playing in the big game. Harvard men were particularly villainous.

After a time, Frank’s younger brother, Dick, also went to Fardale and then Yale. His miraculous pitch went straight until it neared the plate and then went above the batter’s head. Frank and Dick in addition to being baseball stars, were experts in track and field, rowing, football and, really, any sport they tried.  Frank preached strongly against tobacco and alcohol on the grounds that it interfered with athletic ability.

But Frank’s adventures were not confined to the playing field, he travelled the world battling villains and saving his friends from danger.  He also acquired 2 girlfriends Elsie Bellwood and Inza Burrage, who he alternately dated for years. He rescued both girls from great perils before ultimately marrying Inza.

Patten continued to write serial stories and some serious works, but nothing was as popular as his stalwart Frank. To the end of his life, Patten received letters from young men saying that Frank had been their role model and he inspired them to go to college and live their lives as honorably as did his creation. 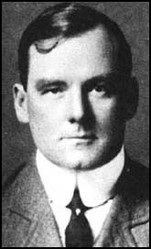