From Childhood to War

Read a personal account of life of a young boy in the 1920s and 30s. Then ride in a B-24 heavy bomber during WWII. This is the story of Jesse E. Pettey - A book review.

I love reading autobiographies. It’s a glimpse of a life through the author's eyes.

I love reading about the day to day life of earlier times. I like to think about how they got things done without all the conveniences of modern life – how they cooked and cleaned and made things like butter and soap. Children growing up had a much different life.

This story, by Jesse E. Pettey, entitled One More Mission, A Journey From Childhood to War, is about growing up in Texas during the 20s and 30s. He recounts how he loved to terrify his mother and grandmother by climbing trees and train trestles. He had a life of freedom to explore the countryside which sometimes resulted in having to be rescued. He describes his first love, the pranks he and his brother played on each other and his plan to make money by keeping snakes.

Although his family wasn’t directly affected by the depression, he describes the homeless, or hobos as they were called then, and what life was like during those dark days. Hobos would knock on the back door asking for food and his mother would never turn them away. Sometimes they would stay for a while and work for his father.

When barely a young man, he listened to the radio broadcast announcing the attack on Pearl Harbor. He made the decision to enlist. He decided to become a pilot and recounts the scanty training they received before being sent overseas. His account is frightening, but funny at times. He learned ways to cope with the fear and sadness of death. 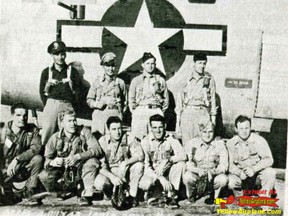 As he neared the end of his 35 missions, tension mounted. It wasn’t uncommon for someone to be killed just before the end of their tour. In fact, he narrowly escaped with his life. His reactions saved not only his life, but the lives of his crew. 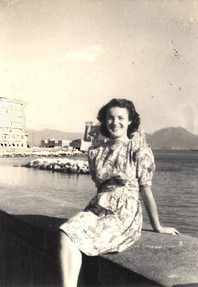 He made it through his missions and was discharged from the Army. He stayed on in Italy for a while working as a cargo pilot. He met a beautiful Italian woman and married her. This is where I got my start. She was my mom. This story is my dad’s.

Although I might be a bit biased about the book, I have to say I found it fascinating. I knew the people he was describing and I found it a revelation to read how he saw them. There are tales I never heard and stories I didn’t understand as a child. I’ve never been a fan of war stories, but these are very personal accounts of someone I know well. It’s a real story of a real life.

After reading this book, I realize how valuable it is for anyone to write a memoir. It may never be a best seller, but it certainly would have historical value, for their family and the world as well.

Thank you for the compliment. Glad you liked it.

It is. But it is really a great deal of work, as you know. Some people seem to think they could do it if they wanted. They've no idea how much work is involved. But I think it's worth it in the end.

Wow, how amazing that he wrote a book. I agree that everyone should, even if it's just handed out as a manuscript to their children and grandchildren. There's just so much in a person's life that that person is taking to the grave, and it's a terrible shame.

It really is special when someone in your family writes down their history. There are stories you'd never know otherwise.
Thanks.

WOW Lil how cool, thanks for sharing this treasured family history with us. Very nice!

Published in 2001 for those who pay attention to dates. I don't I guess.

This is very exciting! An autobiography by your father! I think you should put somewhere at the beginning of this article when it was published. Maybe I just missed that bit?

One More Mission: A Journey from Childhood to War
88%  15   7 cmoneyspinner
Biographies and Memoirs

A brief bio-snapshot of John Ronald Reuel Tolkien. (1892 - 1973), the architect of Middle Earth, and gift ideas for the Tolkien enthusiast, like Hobbit Scrabble.
56%  12   3 BardofEly
Biographies and Memoirs

Singer-songwriter, author and poet Anthony Reynolds has written a biography of Leonard Cohen. This book on the life of the Canadian legend is published by Omnibus.
Loading ...
Error!