Gonder Pottery Collectibles Made in the Forties

Have you heard of Gonder Ceramic Arts from Zanesville? Information and photos of a pottery collection. Lesser known and affordable. I am using them for my Forties era bedroom.

Learning about Gonder pottery collectibles kept me discovering and entertained for over a year. Gonder pottery still can be had for reasonable prices. I found it fun for collecting.

An inexpensive entertainment for our family, when the kids were young, was visiting the antique fairs in Pomona, CA. Antique pottery had a very big presence there, but Gonder pottery never became familiar to me. I found this wonderful ceramic pottery when I decided to redo the master bedroom in Forties era decor.

Pottery on ebay is fun and exciting, discover new stories, such as this one about Gonder; a good American story about a man and his craft, his ingenuity and success despite competition. He had his niche and went to the lab beakers and developed a glaze that has been time tested. He also enrolled an eclectic band of artists for the pieces he called art ceramics.

With ceramics we have an interesting U.S.A. story from a pottery center: Zanesville in Ohio. Bare bosom Hawaiian pieces were censored by the buying public. The story even gets a bit mysterious due to a factory fire. Explore Gonder pottery made in the mid 20th century.

Gonder pottery was produced in the same area of Ohio as all the well known pottery, such as Weller, Shawnee, Hull, McCoy and Roseville. Gonder was shipped all over the U. S. and Canada but did not have the huge volume like the other potteries.

The factory Gonder Ceramic Arts, Inc. was in business between 1941 and 1957 and was run by Lawton Gonder. From day one he referred to his business as ceramic art, and in fact, he employed the best sculptors and artists in the country for his designs and molds. His focus was the ceramics and glazes, not running the business.

Gonder experimented with many different glazes and is known for his non-crazing shiny glaze. The pieces I have are very shiny and beautiful after 70 years. I acquired the mustard and brown pieces on eBay. This color is a bit cheaper. The most prized glaze is the Red Flambe. By 1941 he had worked for potters and tile companies many years. First as a student starting at the age of thirteen in 1913, then later manager and lab chemist.

Gonder worked to develop the crackle glazes and the "volcano" glaze.  All Gonder ceramic pieces have stood up well against time. They resist chipping and cracking.

Many of the designs show Asian influences. Especially the crackled pieces. Some are just plain ugly in my book. A console vase called the "banana boat" by Gonder employees was disparaged in the most funny way by an eBay seller that I placed a bid on the description alone. It went for over $100.

There were Polynesian and Hawaiian water carriers that could be purchased in male and female pairs. They were a very popular until the early Fifties. Retailers suggested that customers would be more likely to buy them if the female pieces had bathing suit tops on.

The Gonder pottery cookie jars are popular enough though they are not very cute.

The largest source for Gonder pottery is eBay. I browse ebay to see my Gonder Firsts. My First witness of a Gonder pattern. Every month I see some ceramic vase that is not familiar to me. I'm also looking for the fantastic deal. Though not an avid collector sometimes a Gonder piece is irresistible.

Search eBay Under 'All Categories' for the Most Examples

By WWII Lamps Were in Demand

During WWII pottery became in big demand. Gonder opened a lamp factory to put his molds and designs into further use. In the forties nearly the whole country was finally part of the electric grid, add the lamp components and a new commodity was for sale. It was called Elgee Pottery. Elgee being his initials LG. This factory was in production for eight years.

Here is a lamp that I bought on eBay. The lamp is cleaned and a shade added. It is now I night light in my livingroom. Lamp restoration.

I also rebuilt a lamp for the master bedroom.

I found good information about the pottery business in this book. There are dozens of pages of wonderful Rumrill pottery in color. I also learned of the connections between Rumrill and Gonder pottery. After reading this book I wanted to collect this beautiful pottery too. If you are interested in Gonder this book is a must for making your collection more enjoyable.

Do you own Gonder pottery? I even enjoy new pottery at art fairs. Whatever is your pottery passion I know it is very addictive. Must be the clay and the idea that it can take so many shapes.

paperfacets, What about the banana boat console vase makes it so ugly? Were the lamps or the pottery more popular and profitable?

Most pottery collectors think this ceramic maker was a bit too flamboyant or kitschy. He helped pave the way for the Fifties, I think.

I've never heard of Gonder pottery, but some of these pieces look familiar, so I must have seen them in other people's homes. 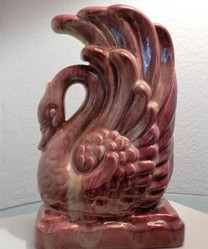