What Makes The Perfect Halloween Cupcake?

Is it something that’s cute and spooky or just plain gross and crawling with insects or snakes?   The ideal Halloween cupcake really depends on who’s doing the choosing which is why I have a selection of different ones for you to choose from.

This year I’m in love with the ghost cupcake pans and I think these would make an awesome Halloween cupcake.   Last year, however, I was very much taken with the skull cupcake pans which is part of the reason why I don’t own any yet – decisions, decisions!

Transform A Plain Cupcake into A Halloween Cupcakes

Now not everyone is confident enough to bake cupcakes from scratch and that’s fine.   I’ve used packet cake mix plenty of times and if that’s what you want to do I say go for it.   I would much rather spend time on getting the cake decorating perfect than making sure I baked the best ever cupcakes.

If you have a cupcake recipe that you regularly use then use that one and read on to find out how to turn your humble (or not so humble) cupcakes into Halloween Cupcakes!

Cupcake stencils are an awesome idea for creating great cupcake designs and these Halloween ones are no exception.   Both Martha Stewart and Wilton offer Halloween cupcake stencils for sell online – see opposite.

How do you use these Halloween cupcake stencils to achieve great looking cupcakes?   It’s really easy – first you need to frost the cupcakes, but not in a spiral the frosting has to be flat which means you can get a yummy Betty Crocker chocolate frosting (or similar) and apply it with a butter knife.

The next step is to hold the stencil over the top of the cupcake without letting it touch the frosting and then sprinkle over whatever you’re using to create the shapes.

I like to use white frosting when I’m using these stencils as I use a powdered chocolate to get my shape be it a bat or a witch.   I only do this because I keep the chocolate to sprinkle onto my coffees!

You can use colored sugars or sprinkles instead and although I haven’t tried it I’m thinking that a black frosting with confectioners white sugar would look awesome for a ghost stencil!

Want an Even Easier Way To Transform Your Cupcakes into Halloween Cupcakes?

Have You Seen Some of These Awesome Halloween Cupcakes?

Use white buttercream frosting (the icing in the can is fine) on cupcake.

Roll out some fondant (again ready-made is fine by me – who’s going to tell?)

Take a small bit of fondant and roll into a ball – pop that in the middle of the cupcake to give it some height and something for the ‘ghost’ to mold to.

Cut out a circle of the rolled out fondant that is quite a bit bigger than the size of your cupcake – the size will vary depending on the size of cupcake you use.

Drape this fondant over the top of the ‘ball’ and let it hang down over the cupcake – depending on how large a circle you cut out it may reach down to the bottom of the cupcake or it might be a little shorter.

If it reaches to the bottom then it’s great, just smooth it in a few places to make it look ‘ghost-like’.   If it’s a little shorter then make sure it’s in either a plain white cupcake wrapper or a ghost/Halloween decorated one – the combination of the white frosting and the fondant should create an illusion that your ghost is floating over the cupcake wrapper.

Use a black gel icing decorating pen to dot the fondant where the eyes should be or add some chocolate chips.

Halloween and eyeballs always seem to go hand in hand - I'm not sure why, but they get young and old feeling quite squimesh!   Creating an eyeball cupcake is actually quite easy -

Frost your cupcake with the white frosting and try and make it quite flat, after all it is an eyeball.

Add a coconut roll in the middle of the cupcake, to clarify these are the coconut rolls that used to be sold in Licorice Allsorts, but are now also available to purchase on their own.   They come in pink and yellow and, personally, I think the yellow ones look best.

Take your red icing gel decorator pen and make what looks like red lightning bolts around the 'iris' of the eye towards the outside  of the cupcake.

Alternatively you could try decorating your Halloween eyeball cupcake using the method shown on Youtube.

Watch How to Decorate Your Eyeball Cupcakes

The Wilton website recommends a way to make Mummy cupcakes that I’ve found replicated around the internet, but if the idea of piping scares you a little and to be honest I used to hate the idea until a few years ago, then I have a different way to achieve a great looking Mummy cupcake.

Take some white fondant – you can buy it all ready to roll out.   Roll it out and then cut into thin strips (the length of the cupcakes diameter approximately) – these are going to be your ‘bandages’ to decorate your cupcake with.   Place a little white frosting onto your cupcake and add two coconut rolls (or similar sweets to achieve the look of eyes) onto the frosting and now it’s time to mummify your Halloween cupcake.

Now lay the strips of fondant across the top of the cupcake to create the look of bandages covering it - allowing the 'eyes' to peek through of course.   The look will be the same as the one created on the Wilton website in photos, but to look at using fondant adds a more 'realistic' texture to your cupcake than icing does (and it's easier).

If you're baking your own cupcakes from scratch then you might want to check out the recipe for jam donut cupcakes.   Why would you want these for your brain cupcakes?   Well the jam inside makes it look like a blood clot when you open it up - ewh!

How To Make Brain Cupcakes

I would just add one extra part to it and that is to use a red gel icing decorater pen and add a few veins of blood running through the 'brains.'

Of course if you’re creating Halloween cupcakes for children then remember in the eyes of a certain age group of child nothing beats sprinkles on a cupcake so you could just add frosting to your cupcakes and then sprinkle these fabulous Halloween sprinkles all over them!

No Trickery Here, It's All About Treats!

Will You Be Making Any of These Halloween Cupcakes This Year?

Featured this page on my Halloween Brownie Pops page as well. Love the eyeball cupcakes that use the gummy savers.
Janice
P.S. Became a fan too!

Brownie and cake pops are a big trend for parties so why not add a little fun...

Are you looking for instructions to make some great looking spider cupcakes? ... 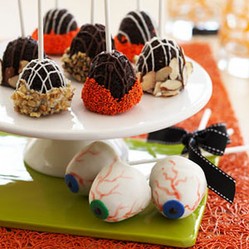 Brownie and cake pops are a big trend for parties so why not add a little fun to your Halloween party with these tasty and spooky treats!
65%  4   8 lou16
Halloween Recipes