History of the Potato Chip

This American snack food was originally an expensive treat available at fine resorts.

Saratoga Springs is a resort town in upstate New York. In the 19th century visitors were lured to the area by its mineral springs. Drinking and bathing in the water was considered a health treatment. Resorts grew up in the area, at first just for people seeking a healthy rest. But soon casinos and race tracks were developed in the area.

By 1853 Saratoga had many resorts with fine restaurants. One of these was the Moon Lake Lodge and it was in the resort restaurant that the potato chip was born. French fries were, in those days, considered an elegant size dish. Thomas Jefferson himself had brought the recipe back from France and served them at Monticello.

So the elegant resort had French fries on its menu and chef George Crum prepared them every night. But one guest was not satisfied with his potatoes and he sent them back to the kitchen, requesting thinner fries. Crum made thinner fries as requested, but these too were rejected and sent back.

At this point the Native American chef was very annoyed and decided to further annoy the customers. He would create fries that were too crisp to use a fork, which was considered the proper way to consume them. He fried up waver thin fries and sent them out to the customer. This backfired, the customer loved them and soon other guests were requesting them. They were dubbed Saratoga Chips and appeared as a regular item on the menu.

Soon, the potato chips were being made and sold in small cardboard boxes in the area. Later they were sold throughout New England. Crum soon left the resort and opened his own restaurant with chips prominent on the menu. Each potato had to be hand peeled and sliced so mass production wasn’t really possible and chips remained a hand made, regional product.

This changed in the 1920’s when a machine was invented to quickly process the chip. The new mechanization made the chips cheaper, but they were still just a local favorite.

This changed when Herman Lay, a travelling salesman, was able to introduce the chip to the American South. He sold the chips out of his car and soon his name was synonymous with potato chips. Lay’s chips were the first successful national brand. By the 1960’s Lays had merged with Frito, a Texas corn chip company.

Today, this accidental invention is one of America’s most successful snack foods.

What a fantastic story! I love hand-fried chips with just a bit of salt.

Chips or crisps as the British will say. I love them. I had them for the first time when I was in Britain in the 1960s. Smith Potato crisp, with little blue salt sachets. It was much later that they could be bought in the Netherlands (where I live) 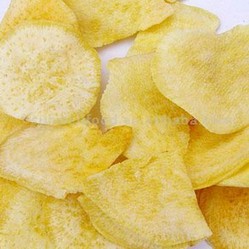 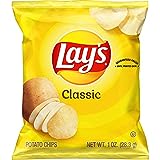