Hotels Near the Olympic Park, London

The Olympic Stadium is the main athletics venue for the London 2012 Olympics.

The Olympic Stadium is inside the Olympic Park in East London.

Also within the Olympic Park are the Basketball Arena, Handball Arena and Hockey Centre.

The Olympic Park is also the location of the Olympic Village where athletes will be staying.

The links below will take you direct to booking pages showing location and availability of hotels near the Olympic Stadium in London. I live in the UK, but not in London, we have regularly stayed in London hotels and these are the two websites I recommend for finding a good deal on a London hotel room.

Laterooms.com - Hotels near Olympic Park
Laterooms.com specializes in finding the best deals for hotel rooms at the last minute. It's best not to wait until the last minute for Olympics hotel bookings. Dates for July and August 2012 are already bookable. Laterooms is always my first stop for hotels in London, I've had great deals through them on many occasions. They pull in deals from lots of hotels.

Expedia.co.uk - Hotels Near Olympic Park
Expedia is another of my favorite sites to book hotels in London. This link will take you directly to hotels near the Olympic Park.

What is the Olympic Park?

The main venue for the London 2012 Olympics.

If you have tickets for events at any of these venues, or the Olympic Park itself then this page will help you find a hotel to stay at.

Where is the London Olympic Park?

Venues within the park also have specific postcodes. E20 is actually a new postcode district that has been introduced for the Olympic Park.

Not all hotel sites will recognise the new postcodes immediately.

The Olympic Park is in Stratford, East London. The address for the Olympic Stadium is:

Many hotel searches required an postcode or region (Stratford) to find a London hotel.

Keeping the Hotel Cost Down

Just make sure you can easily get to one of the rail or tube stations that serve the Olympic Park.

You could also consider a holiday rental apartment for the games. Many properties are being rented out for the Olympics.

After the London 2012 Olympics, the park will be known as the Queen Elizabeth Olympic Park. It will be turned into a parkland area with many of the Olympic facilities dismantled.

Will you be staying in a hotel for the London 2012 Olympics?

I bet the UK is really excited about the Summer Olympics coming to London. Think of the revenue it will bring to the city, not to mention the excitement. 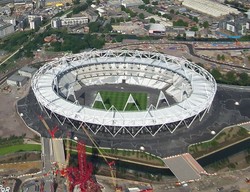