Exposition is important, and can even be vital, to your short story, novel or play. However, if handled incorrectly or clumsily, it can verge on painful for your reader.

Exposition can be a tricky mistress. You want to offer your readers or audiences the background information necessary for them to understand what’s going on, and add depth to the characters and action.

However, you don’t want to bore them, nor do you want to introduce facts in a fashion that makes them seem as though they’ve been crammed into your text with a shoehorn.

So, what's the secret to writing good exposition in fiction?

At the beginning of a narrative, the exposition is the author's providing of some background information to the audience about the plot, characters' histories, setting, and theme. Exposition is considered one of four rhetorical modes of discourse, along with argumentation, description, and narration...

There are various ways to deliver exposition

Your choices may depend upon what form your writing takes. However, regardless of your narrative style or whether your writing a novella or a screenplay, there are many options available to you. Here are just a few of them:

Alternatively, of course, there are the tried and true methods of character dialogue or internal monologue.

Tips for Writing Exposition #1: Get to The Point

Keep to the bare necessities

Although the definition above claims that exposition is provided at the ‘beginning of a narrative’, this isn’t always true nor is it always desirable. There may be chunks of information that you wish to keep hidden from your reader or audience, at least, for the time being.

However, you will probably need to set the scene, especially if you’re writing prose. Of course, there are no rules and you may wish to go barreling in without any background, but, in most cases, you will need to offer some information (even if its only very thin) in order for your reader to get his or her bearings.

And, in fact, if you want to be vague or thin on the details, that may work to your advantage, because many writers, especially beginners, go wrong by throwing far too much information at their reader.

Set things up as quickly as possible and then get on with the action of the story. Otherwise, you’ll lose a reader’s or audience’s interest before you’ve even begun.

Tips for Writing Exposition #2: Use Camouflage

Some instances of exposition might as well have a big neon sign flashing over them, and there is actually nothing more of a turn-off for a reader. You’re sure to have come across this yourself and noticed your attention instantly starting to wane.

The answer to the problem is a simple one. Whenever possible, ensure that your exposition is blending with the rest of the narrative. You can even manage to slip it in while no one's watching. For instance, if you have a protagonist who is a detective in the midst of a divorce, you could write:

“Frank Smith is a detective, unable to keep his mind on his job, because his wife left him two months ago and she’s just filed for divorce.”

Or you could try to weave that detail more subtly into the text.

“Frank cast his drowsy eyes around the bombsite that was his kitchen. It looked a little like a crime scene he’d been called to last June, except there was no headless corpse or blood stains on the floor. As his gaze wandered to the kitchen table, filled with dirty plates and two empty bottles of scotch, he found the brown legal envelope that had remained unopened. He knew what was in it, had been expecting it for the better part of a month. Still, he was reluctant to actually look at the piece of paper that told him his marriage was over.”

Admittedly, that was a little more long-winded, but the trick here is to let tidbits of exposition creep into the reader’s mind without them being aware that it’s happening.

Don’t bombard your reader or audience

There are two very big problems with overloading your creative writing with too much exposition. First, you’ll bore your audience or reader. Second, nobody will be able to retain all of it anyway, so you’re wasting your time.

So, how do you avoid information overload?

Well, the first and most simple option is to keep ‘Tip #1’ at the forefront of your mind at all times. It also helps to shake the desire to get all of the information down in one go.

It’s not necessary for an audience to know everything about a situation or character before going in. So, allow facts and details to creep out naturally as the plot progresses.

Tips for Writing Exposition #4: Ask Questions to Which Points of Exposition Are The Answers

Play your creative writing cards close to your chest

One of the most effective ways to handle exposition in creative writing is to ensure you’re giving your audience information that it actually wants. And the great news is that you can manufacture a scenario in which details are hankered for, by being a little more mysterious and vixen-like in your writing. So, what do I mean?

Well, quite simply, I mean, make your readers ask questions. For example, if you were to write:

“Carla’s breath appeared in heavy plumes in the pitch black air in front of her. The stench of rotten fish causing her to gag, as she paced the concrete dock.”

Your audience wants to know who Carla is and what she’s doing at the dock in the middle of the night. Is she a prostitute? Is she a cop? Is she just an ordinary woman, who has become embroiled in some kind of espionage, like Whoopi Goldberg in Jumpin’ Jack Flash?

You can answer these questions by providing points of exposition that will also serve a purpose later in the story.

Avoid these errors in expository writing

As well as keeping all of the above in mind, I would recommend checking your work to ensure that you are not guilty of one of the following exposition no-nos.

Being too direct - For goodness sake, assume that your readers have brains. Don’t treat them like idiots. You can give them one and one, they’ll get two.

Forcing exposition into dialogue - This is a big problem in plays, but novel writers can also run afoul. Dialogue is a wonderful way to deliver necessary information, but, if done wrong, it can seem terribly clunky and awkward.

In my opinion, the best way to avoid that is to keep the ‘don’t be too direct’ rule in mind. In other words, if you have two characters who were once in a relationship, don’t go for a line of dialogue that explicitly states that fact:

“Well, Steve, it’s been two years since you walked out on me.”

Instead, try a subtler approach:

The hesitation indicates nervousness or awkwardness, that would not be present if the two had just been casual acquaintances. Not only can we surmise that the two were once lovers, but we can also assume that the breakup was certainly less than happy - but then, how many breakups are happy?

Writing pages of scene setting and character descriptions - No matter what form you’re writing in, no one wants to read reams of detail, most of which is irrelevant. By the end, your reader will have fallen asleep.

Not leaving room for imagination - Description, if done right, can be poetic, captivating and beautiful. It can offer a vivid image of what you want your reader to focus on, allowing him or her to see exactly what is in your mind’s eye.

However, be careful not to give excess scene setting for the sake of insisting that your reader see things the way you do. There’s nothing wrong with leaving some things to their imaginations. And, unless you’re Victor Hugo, chances are, you can’t sustain a reader’s attention for pages and pages of intricate exploration of Notre Dame Cathedral.

Placing importance on irrelevant things - I know, to you, the fact that your antagonist had a goldfish when he was six seems important; it’s incredibly revealing. However, it’s really not as important as you think it is. Creating lots of background for your characters is vital, because you have to get inside their heads. An audience member or reader, however, does not have to understand every nuance of behavior.

Exposition is all about providing information that is vital to the understanding of a literary or theatrical work. If you take nothing else away from this article, remember this: make it short, make it sweet, don’t force it, don’t give it all away at once and don’t feel that it has to be spelled out in black and white.

Must Have Accessories for Writers

For More Tips on Creative Writing, Check Out...

Bring Me to Life | How to Write Realistic Fictional Characters
In most cases, characters are the heart and soul of your story. Despite the fact that they only exist in a make believe world, they must be ‘real’ to you and to your readers.

Tips and Tricks For Overcoming Writer's Block
All writers, at one time or another, have suffered the frustration of what feels like a complete creative drought. Read on, to find out how to beat writer's block.

Putting Words in Their Mouths | How to Write Good Dialogue in Fiction
There are many ways that a good story can be ruined, bad dialogue is one of them. So, what are the secrets to writing natural, captivating speech?
Updated: 02/16/2013, WiseFool
Thank you! Would you like to post a comment now?
8 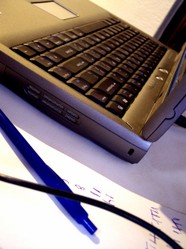