Insp. Inspector's task is to find 4 missing cheerleaders. The recent frisking session reminded him of why he liked this job.

You were right girls. We will never again pose for an ad for feminine protection.

Insp. Inspector drove a new yellow Modus Operandi, a sleek, low slung auto. The glove compartment folded out into a small laboratory with a microscope, Bunsen burner, and a follicle test kit that performed 11 DNA tests on a strand of hair (12 if split end).

At age six, Insp. lost his right eye to a running accident with a sharp stick in one hand and the good pair of scissors in his left hand. He fell on the scissors but was able to pry them out of his right eye socket with his sharp stick.

Insp. Inspector was seldom embarrassed about his glass eye. No one noticed that he wore a glass eye. Often, a stranger on an elevator would make the point, “I don’t care if you have a glass eye. I really don’t. In fact, I never even noticed the glass eye. I thought it was plastic.”

Insp. Inspector was put on the case late Saturday night. Four Thomas Jefferson High School cheerleaders were missing. The rest of the squad was ill or on the bench. Head cheerleader, Susan Oliver, was out for the season with a stretched something. The squad doctor warned, “No more mid-air splits.” The next cheer could see her leave the ground as a girl and land as a woman, especially if she landed on top of the sideline chain marker again.

Also out for the season were Heather and ShaNancy. They were living in a Gainesville home for unwed mothers. A French grandmother ran the residence. The pregnant girls were learning a natural childbirth method with no anesthetics, The Le Gram Maz method.

Big game night the four cheerleaders had been standing on the sidelines primed to root, throat spray at the ready with brand spanking new pom-poms. Inspector does not condone the spanking of cheerleaders.

The Big game was a football battle between Jefferson High School and their city rival, Alexander Big High School. Mr. Big had been the only county repairman who could repair a school air conditioner. He was intensely admired by sweaty students and smoking lounge teachers.

The Big High football team lumbered onto the field and started grazing in the end zone. They were having trouble nibbling the young tender Astroturf shoots through their face shields. Face shields fell off and the hungry hulks began feeding again.

The Jefferson High football team floated onto the field with a little buzz-on from the coach’s special bag of tricks. $25.00 a bag. $20.00 if you were on the first string team.

The Jefferson High Football team tried to run through the paper banner but bounced back on their pads. They were too stoned to rip the paper. The only thing ripped was the Jefferson High football team. Two halfbacks, 43.5 and 44.5, floated over the paper pennant while the rest staggered around the goalposts.

The game started. During the first quarter, one cheerleader disappeared.

Second quarter another cheerleader disappeared. The crowd noticed that something was amiss. Another miss was missing and something was missing from the cheers. “Push em back, push em back Waaaaay __________blank.” Even the “Sis Boom” didn’t have a “Bah”.

The crowd’s attention was drawn back to the field. Nine Big High players had a Jefferson running back down on the ground, eating his arms.

It was half time when the Thomas Jefferson High School Piano and Bass Drum Marching Band tromped onto the field 113 strong: 80 baby grands and 33 bass drums. The band formed a map of North America. The bass drums rolled into position as the continent’s major tributaries and rivers.

A Channel 8 Sports of Sorts News Cessna flew over the field. The pilot observed the entire North American continent below him and he called for an altimeter check. “TIA. This is F.U.2. Please give altimeter reading. I read 2,000 feet but I can see the whole country down there.”

The previous week another pilot tried to touchdown on the football field while the band formed all the Tampa International Airport runways in a tribute to air transportation. A piano player was hit by the plane. He remained in intensive care for 3 days. Doctors said it was touch and go for a while.

Seven and a half minutes later the Big High School Band stalked onto the field trying to prove that 150 band students could all hit the ground with their feet at different times. Instant replay proved they had done it. They played a one-minute salute to the greatest hits of Selena and were quickly off the field.

The third quarter arrived. The remaining two cheerleaders did not vanish but they were nervous and jittery. The pom-poms were aquivering and the blouses were ajiggling.

Fourth quarter, the still-high Jefferson High Football team dribbled downfield toward second base when the last two cheerleaders disappeared. The crowd chanted, “And then there were none.”

The P.T.A. called in Insp. Inspector for help and he was able to stop everyone from leaving. There was a search.

Two weeks had passed. Inspector had personally frisked the last of the crowd. He placed his now raw, bleeding, but satiated hands into his coat pockets. He scoured the stadium one more time with his real eye, tired and gritty after the scouring.

The frisking had gone well, especially the girl working the Key Club Hot Dog and Mustard-Relish Concession. She was the last to be frisked. He could still smell the sweet mustard-relish on his hands.

Why was there so much mustard-relish in her bra? Was there some connection? Was she conspiring with others to kidnap the cheerleaders? Had she slipped right through his fingers? Had he slipped his fingers through her mustard-relish? Who was asking all this questions without quotation marks?

There were few clues. Broken bottles of throat spray lay scattered on the sidelines. Pom-pom strands still littered the field. “No real clues here,” said Inspector, as he walked around a large gaping, black, still steaming hole where the cheerleaders had been standing. “Just no clues here at all.”

Inspector ambled out of the stadium like a 300-pound Medicare Supplement insurance salesman with a toothpick in his mouth exits an All-You-Can-Eat-Buffet. He was tired, disturbed, and still somewhat puzzled. He moved with the faint sweet air of mustard-relish lingering from his coat pockets. Inside his coat pocket, his frisking hand lay bleeding.

He returned to his office over the AAMCO Transmission Service station, famous for the ad, “At least half of the transmissions we test don’t need to be replaced.” Of course, they go ahead and replace them anyway but they really didn’t need it.

Inspector went through the clues one more time. Finally he drifted off to sleep at his desk, his hand now well clotted to the coat pocket lining.

He dreamed fitfully after the grueling two-week frisking. His dreams took him to gentle ocean breezes, twin beds, and Continental breakfasts. The dreams brought him back again, all for $389.00 including airfare.

Inspector woke up, pulled his hand out of his coat, and pulled out the pocket lining. Bits of stuffing were still plasmaed to his frisking hand. He changed jackets. “I’ll just pretend I shredded my glove while interrogating a suspect.”

He returned to the stadium. The groundskeeper, not to be confused with the keeper of the grounds in a Colombian coffee field, was filling the football field holes punctured by the piano legs during the last half time show.

The groundskeeper called himself Morris. Morris commanded all the maintenance crews for the county schools. He wore a wide brimmed straw hat and smelled of sunscreen.

He was so cautious about UV protection that he sprayed sunscreen on his sunglasses too. He even wore them at night when returning home to his ageing fat wife. The smeared lenses took the edge off the harsh reality of spousal deterioration.

Inspector slogged through the ravaged field toward the grounds-keeper. “You must be Insp. Inspector. I see that you’re trying to pretend that you shredded your glove while interrogating a witness.”

Inspector chuckled to himself, “This guy’s not too bright.  He thought it was a witness instead of a suspect.”

Morris said, “I find it remarkable that you have overlooked that large gaping, black, still steaming hole where the cheerleaders had been standing when they disappeared.”

Morris had once seen a ventriloquist with a bird who spoke out of Tern but it wasn’t the same when Morris spoke out of turn. “I find it remarkable that this large gaping, black, still steaming hole might hold a clue as to the whereabouts of the four cheerleaders. I’d look into if I was you.”

“I can’t look into it if I’m already in it,” quipped Inspector, who had only recently started quipping seriously.

“Oh, I get it,” foolishly chuckled Morris, who had only recently started chuckling foolishly.

Morris took a deep breath. “Inspector, if you were up here in the real world with me and the Astroturf and could, as you investigators everywhere say, ‘Look into it’, you would see, as I see now as I look into it, that the four missing cheerleaders are standing next to you in the large gaping, black, still steaming hole and they are safe, sound, but suffering from laryngitis as a result of over-cheering at the Big game, which is why they could not call out and have been furiously whispering for help during these last two weeks.” Morris sat down to catch his breath.

Inspector was amazed and proud of himself. In all his days of inspecting, (14), he had never comprehended such a long sentence. He turned around to see the four cheerleaders. They were waving their hands and trying to whisper.

Before he closed the case, Inspector had a final question. After the rescued Rah Rahs left, he leaned over to Morris and whispered, “Morris. What is an embryo?” 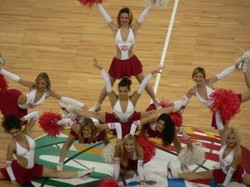 A clash of languages can leave an amusing legacy in the landscape. You just have to know what all the words mean.
Loading ...
Error!