After starring in Mario Bava's Italian horror classic "Black Sunday," Barbara Steele became a star and appeared in a long string of Italian movies; most of them gothic horrors. "The Long Hair of Death" was directed by veteran Antonio Margheriti, a jack of all trades. "Castle of Blood" is regarded as one of the best movies made during the Italian gothic horror boom in the 1960s.

I continue watching Italian Gothic horror movies of the early 1960s. Here’s a Italian-French co-production, once again starring the Queen of Italian Sixties Horror; Barbara Steele, and once again directed by Antonio Margheriti, this time sharing the duties with Sergio Corbucci, who a couple of years later went on and made the classic “Django”, one of the very best Spaghetti Westerns.

I wasn’t very fond of Margheriti’s “The Long Hair of Death” from the same year, I found that one atmospheric but very stiff and boring. This time time the result is much better, “Castle of Blood” is not only dripping with Gothic atmosphere, it’s also pretty entertaining -- maybe because huge chunks of it are remarkably silly, and I don’t know if it’s intentional or not. 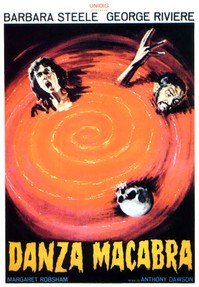 The original title of this movie is “Danza Macabra”, and it was also released with the English title “The Castle of Terror”. Don’t mix it up with Margheriti’s “Horror Castle” (1963) or Mario Caiano’s “Nightmare Castle” (1965)! In this one, Georges Rivière plays Alan Foster, a writer who one dark and stormy evening runs into no other than Edgar Allan Poe in a tavern. Poe does of course tell spooky tales, but sceptic Foster just laughs at the stories.

Shortly thereafter another man approaches Foster and dare him to spend a night in his castle. It’s All Soul’s Eve and Foster accepts the task. The castle is supposed to be empty, Foster doesn’t believe in the supernatural -- what could happen?

Our man Foster enters the castle and walks the abandoned halls. He’s all alone. Hey, why not play the piano, he thinks, and while doing this, he suddenly feels a woman’s hand on his shoulder. The hand turns out to belong to young Elisabeth Blackwood, played by Steele looking as stunning as ever. Foster is captivated by her beauty and it doesn’t take long before they fall in love. Yes, it’s love at first sight!

But for being an empty castle, there sure are lots of people running around in there behind the thick, gloomy walls. Another beautiful young woman shows up, and a bearded man, and yet another man, and suddenly and totally unexpected, a bare chested bodybuilder pops up and wrestles and bites people to death. This guy is absolutely hilarious and makes me think of Mickey Hargitay as The Crimson Executioner in the fantastic trash classic “Bloody Pit of Horror”. 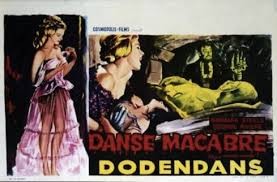 It turns out that all of the characters Alan Foster meets in this Castle of Blood and Terror are in fact dead. They were apparently killed a long time ago. Now they’re back from the grave, trying to drink Foster’s blood -- or something like that. But I think Steele’s character loved Foster for real. Before the sun rises, they are however all dead once again. Some of them (or maybe all of them? I don’t remember) killed by our friend, the bodybuilder.

When Edgar Allan Poe and the owner of the castle arrive next morning, they find the apathic and shocked Alan Foster standing outside the gates. Foster doesn’t say anything, he’s just staring in front of him. He doesn’t protest when the castle’s owner pulls Foster’s wallet out and take the money he’s won on the bet. Foster was wrong -- ghosts really do exist!

The story of “Castle of Blood” reminded me of Pete Walker’s last movie, the underrated “House of the Long Shadows” (1983), which in turn is based on the novel (and the play) “Seven Keys to Baldpate”. A writer spends a spooky night in a haunted castle or mansion. The ads claim that “Castle of Blood” is based on the writings of Poe, but I can’t recall a Poe story reading like this movie. The atmosphere is of course inspired by Poe.

“Castle of Blood” is a fun and very good looking, black and white movie. It’s one of the most entertaining Italian Gothic horror movies of this era. Check it out if you find it somewhere! 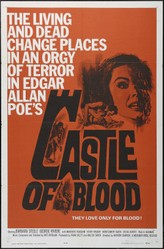