A review of the 2005 action movie starring Steven Seagal and filmed in Japan.

In the immortal words of that famous philosopher, Popeye: Well, blow me down!
Sometimes a movie is far from what you expected. When in comes to Steven Seagal movies, you have the older, big budget ones from Warner Bros. You have the more or less unwatchable ones, shot in Eastern Europe. You have the entertaining exceptions like “Urban Justice” and “A Dangerous Man”, usually filmed in Canada.
And then you have this one; “Into the Sun”, directed by a guy who calls himself mink. Not Mink. Not M. Ink. It’s mink. My grade school teachers wouldn’t have approved that spelling when I grew up back in the seventies.

“Into the Sun” was shot in Japan, where it also opened theatrically – on 90 screens, no less. I don’t know about Japan, but in most European countries, 90 screens is considered a very wide release, that’s what sure-fire blockbusters get. But to be honest, I’m not surprised this direct-to-DVD movie played theaters in Japan and a few other countries.

mink’s film opens with the governor of Tokyo getting assassinated but the Yakuza; the Japanese mafia. There’s a new, psychotic Yakuza hotshot in town, Kuroda (Takao Ohsawa), who’s operating together with the equally deranged Chinese gangster Chen (Ken Low). Their goal is to control the drug business.

William Atherton plays a CIA agent called Block. Yes, it’s William Atherton! The asshole reporter from the first two “Die Hard” movies”! He never leaves his office where all of his scenes were shot, so apparently, he was hired for a couple of days. Anyway, Block gets a phone call from one of his bosses who wonders if he knows somebody who’s an expert of the Yakuza. Of course he does. Block knows exactly whom to call.

No, he’s not. He’s of course played by Steven Seagal.

Hunter is immediately teamed up with young rookie agent Sean Mack (Matthew Davis), which is good, since Hunter seems to be interested in anything but solving the case. The slightly annoying, fish out of water agent Mack also has a label screaming “DEAD MEAT” plastered across his forehead, which is great – the best thing to motivate guys like Hunter to go to work, is of course vengeance.

So, since Hunter isn’t very interested in the case, what’s he up to? Well, this guy likes to hang around, eating at restaurants, and courting a beautiful Japanese woman; Nayako (Kanako Yamaguchi). One sunny day under the pinkish trees in a romantic park, Hunter proposes to Nayako – but she actually says no! It’s too dangerous being married to Hunter. But Hunter promises he’s only got one final thing to do; finding the nutcase who killed the governor. Then he’s going to lead a quiet and peaceful life with Nayako in a beautiful house somewhere in Japan. Nayako gives him a soft smile and eight letters flash across her forehead: “DEAD MEAT”.

Kuroda, Chen and their band of psychopaths first kill agent Mack, and then they kill poor Nayako. This pisses Travis Hunter off. On the DVD sleeve, he’s carrying a combined machine gun and grenade launcher. Surprisingly, he doesn’t use one in the actual movie. The guy isn’t even close to using a machine gun. Instead he and a hot, sexy and dangerous Japanese chick arm themselves with samurai swords. Of course they do. This is Japan. If somebody pulls a gun at you, you pull a sword. That only makes sense. In this world, swords are faster and more powerful than bullets.

Hunter, the hot chick, and a third Japanese guy, slice and dice all of the bad guys, and then Hunter takes a melancholic walk in a stunning, sparkling, colorful park.

The plot of “Into the Sun” may be rudimentary, but this is one gorgeous looking movie. mink and his crew make the absolute best of the stunning locations and they put every dollar where you can see them. In this movie, Tokyo is a mysterious, candy-colored world. This is a slick, very competently made movie. I especially appreciated seeing the China Town of Tokyo, I had no idea there was one. Apparently, the movie was shot in the streets where Seagal once lived for real.

More than half of the dialogue is in Japanese. Sometimes Hunter speaks Japanese as well. Sometimes he speaks English with people who answer him in Japanese. However, when they discuss very important plot elements, the bad guys speak English to each other – with very thick accents.

The baddies are really awful, ruthless persons. They behave in that typical, bizarre, nonchalant way familiar from lots of Asian gangster movies – they are laid-back, look totally uninterested in what’s going on, they have a cigarette hanging from the corner of the mouth, and they laugh maniacally when they make people suffer and die.

My main complaint about “Into the Sun” is hero Travis Hunter’s behavior. He hardly kills anybody. What the hell is this? There are surprisingly few action scenes in the movie. He only slaughters maybe ten people. That’s a low body count for a Steven Seagal movie. But what about the requested bone-snapping martial arts fights, then? Nope. Sorry. There’s just one major fight here, and Seagal is pretty restrained in it. He’s too busy having dinners and romancing women. He forgets killing bad guys.

All in all, “Into the Sun” is one of Seagal’s best DVD premiere movies, and I especially appreciated the restaurant that has a huge fisktank in which topless girls are swimming around like mermaids. I wouldn’t mind going to a place like that. I’d probably order wieners from the menu. And buns. Or something spicy and saucy.

Some of the songs on the soundtrack are composed and performed by Mr. Steven Seagal himself. 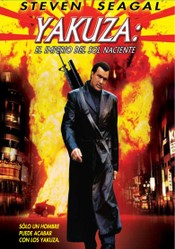