A review of the 2005 action movie starring Steven Seagal; a sequel to "The Foreigner."

This time, ex-CIA agent Jonathan Cold is working deep, deep, deep undercover – as a bad guy.He’s so deep undercover the CIA believes he’s dead. A pair of young Chechen terrorists perform a series of robberies so they can afford buying themselves a plutonium bomb. CIA killed their former leader, which pissed them off, so they’re going to blow up Los Angeles. Now, that’s what I call revenge! And Jonathan Cold is helping these nutty guys.

Tamara Davies plays CIA agent Amanda Stuart, who says that Cold taught her everything she knows. She wonders why Cold has returned from the dead and joined the bad guys. Half way through the movie, she finds out that Cold isn’t a bad guy at all, so they join forces, kill all of the baddies, drop the bomb into the ocean, and then Cold takes Amanda out for dinner. They have white wine and Cold smiles.

Agent Amanda Stuart really deserves that dinner. She does most of the work here. She does the running, the shooting, the fighting – while Cold is lumbering in the background. According to some sources, Seagal left the shoot after 18 days, meaning the crew had to film the remaining 12 days without him.

Steven Seagal’s stand-in and stunt double doesn’t at all look like Seagal. He’s much shorter and his wig looks even more ridiculous than Seagal’s rug. During Cold’s very few fight scenes, it’s his double who does the fighting. We mainly see his arms and legs. These fights are so poorly executed it’s hard to tell if it’s Cold who’s supposed to be fighting, or somebody else. Well, if nothing else, Seagal isn’t dubbed in this movie, as is the case in some of his other direct-to-DVD movies. Also, this movie is actually filmed in America – except for a few scenes taking place in Amsterdam, which were shot in Romania. I’m not sure why it’s suppposed to be Amsterdam, it could just as well have been Romania.

”Black Dawn” is the directorial debut of Polish cinematographer Alexander Gruszynski,who went to film school in Denmark. Gruszynski was the Director of Photography on classics such as ”Tremors,” ”Stone Cold,” and ”Maximum Risk.” ”Black Dawn” is the only feature film he’s directed.

Matt Salinger has a small part in this movie. You remember him, right? The son of author J.D. Salinger. He played Captain America in Albert Pyun’s low-budget version from 1990. To be honest, I didn’t spot Salinger in this movie. Why? Because I wasn’t paying attention. There’s a pretty good car chase in ”Black Dawn,” but otherwise this isn’t a movie that grabs one’s attention. I was eating hot dogs while watching, and I probably put mustard on a dog when Salinger popped up.

There’s one thing that differs Jonathan Cold from other characters Steven Seagal plays. Cold wears a suit and a tie. And not just one suit – he even has one that isn’t black. 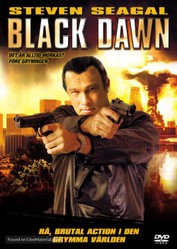