A review of the 2012 action movie starring Steven Seagal and Steve Austin, and directed by Keoni Waxman.

”Maximum security. Maximum firepower.”
It seems like it takes Keoni Waxman to make good – or at least decent – Steven Seagal movies these days. Way to many of Seagal’s movies the last years have been pretty weak, some of them downright bad – in the wrong way. Just badly bad. They don’t deliver the goods, Seagal is hardly in them, and they aren’t even unintentionally funny. Seagal is often unintentionally funny when he practices his patented Dog Paddle Fu, sorry: aikido, and basically bitch slaps his enemies – sometimes while sitting in a chair.

”Maximum Conviction” reminds me of the direct-to-video movies of the 1990s, the ones produced by companies such as Image Organization. It’s low budget and simplistic, but it delivers what its target audience is expecting: a massive amount of gunfire, lots of bloody squibs, blades in throats, and Steven Seagal slapping people around before breaking their arms and necks.

This time, Seagal is co-starring with Stone Cold Steve Austin, which means we get two B-movie action stars for the price of one. Seagal and Austin are Cross and Manning, two former marines who are sent to an old prison that’s closing down. Two mysterious female prisoners arrive to the prison – and shortly thereafter, an army of mercenaries led by a certain Blake (Michael Paré) assault the prison. Blake is after the women – one of them apparently has a chip with important information inside her body. ”I’ll kill them before they kill you,” Cross promises the women, and then it’s up to him and Manning to kill all of the bad guys. Which they of course do.

Some if the violence is brutal and nasty. Blake cuts the finger of the warden, one guy is impaled on an exercise bench (”No pain, no gain!”), and Cross bends a guy’s arm till it breaks and the bone shows. ”Does it hurt? You fucking pussy!” says Cross while doing this. However, Manning has the best line: ”Goddammit, which of you motherfuckers killed my future ex-wife?”.

Bren Foster from TV soap ”Days of our Lives” plays one of the good guys, and it turns out he’s good at kicking people in their face. Michael Paré makes for quite a good villain. And since he’s a real movie villain, he suggests that he and Seagal should settle the score with a fist fight – instead of just reloading and shooting him.

Steven Seagal wears some kind of combat vest. Since he’s so big and fat, it looks like he’s wearing a camouflage Babybjörn baby carrier. 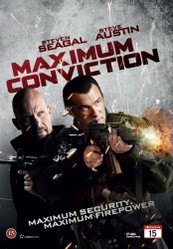