A review of the 2003 action movie starring Steven Seagal and directed by Michael Oblowitz.

Rumor has it that this movie from Andrew Stevens’ Franchise Pictures was set for a theatrical release, but went straight to DVD after Seagal’s previous movie ”Half Past Dead” bombed at the box office. It’s kind of hard to believe this is true. Directed by Michael Oblowitz, who went on to direct ”Out for a Kill” with Seagal, ”The Foreigner” looks extremely cheap and rushed, it’s less than half-baked, it’s quite ugly – and it’s absolutely incomprehensible. It sure doesn’t look and feel like a theatrical release.

Steven Seagal is Jonathan Cold (Cold!), who’s a ”foreigner” – a former agent who worked deep, deep under cover. Now he’s a freelance agent, who’s asked to pick up a mysterious package and deliver it to … somebody. Along with weirdo Dunoir (Max Ryan), Cold goes to France to pick the package up. And then …

Well, I’ve no idea what’s going on. Except for Jonathan Cold, everybody seems to be dirty. Okay, maybe not a woman and her little daughter, who Cold ends up protecting. I’m not sure who that woman was. Dunoir turns out to be one of the bad guys. He shoots everybody he’s talking to. Sometimes he shoots them without any conversation. Instead of just hiding from a cleaning woman in a hotel, he shoots her. In one scene, Dunoir uses two guns, one in each hand – and he has a silencer on one of them. What’s the point having a silencer on just one of them?

There’s also another baddie who shoots everybody he meets, until Cold kills him by throwing a CD disc at him.

They travel all over Europe, which means we get stock footage of Paris and other places, lots of captions pop up: Paris, Berlin, Warsaw, even Norway – but they did of course never leave Poland during the shoot.

It all seems to have something to do with an air plane that was blown up. For some reason, the bad guys blow up two huge buildings. The chain smoking Dunoir gets shot three or four times; after being shot with a shotgun, he’s catapulted through a window and falls several floors – but since he’s apparently a terminator, he keeps on surviving. Until Jonathan Cold finally stabs him to death, that is.

When that woman and her daughter hide in Norway, they’re attacked by Danes. Yes, the baddies are from Denmark! They even yell a few, short sentences in Danish. Cold shows up and kills all of them. Then Cold, the woman and the girl travel to Paris, where Cold buys his new friends a baguette.

Two years later, Jonathan Cold returned in ”Black Dawn.”I wonder who the hell asked for a sequel to ”The Foreigner.” 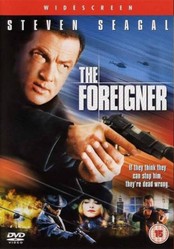