The Seagal Report: Mercenary for Justice (2006)

A review of the 2006 action movie starring Steven Seagal and Luke Goss.

When is there TOO much action in an action flick? It’s when characters spend most of the movie’s running time shooting, stabbing, punching and kicking each other – while you glance at your watch and yawn.
I love action movies with lots of action. Lots and lots of violent, bloody action. “Desperado”. “Shoot ‘Em Up”. “Rambo” (the fourth one). Or why not the Steven Seagal starrer “Urban Justice”, directed by Don E. FauntLeRoy.

Before he made the very entertaining “Urban Justice,” FauntLeRoy directed the decent “Today You die” and this one. I saw “Mercenary for Justice” when it came out, but I can’t say I remembered anything from it.

Allow me to correct myself: I remember it contained lots of action, buckets of it, so much I got bored. Therefore I just re-watched the movie. I saw it earlier today. And I’ve already forgotten most of the plot.

It opens in a pretty silly way. Two men from the CIA handling Black Ops (misspelled “Opps” on a title card in the movie!) discuss what people to send on a dangerous mission to Southern Africa. They are John Dresham (former British pop star Luke Goss) and Anthony Chapel (Roger Guenveur Smith), and we know right away they’re more or less dirty. They namedrop their best men and women, and we’re introduced to them one by one while they’re shooting and blowing people apart. The last man they mention is the most decorated soldier there is: John Seeger (Seagal).

The first 25 minutes of this movie consist of nonstop battles in Africa. People hardly speak, they just fire their machine guns and scream. John Seeger is hiding in a shed he has problems leaving. This is great for the lazy actor Steven Seagal – he doesn’t have to be in the movie very often during the first half hour.

Seeger’s best friend is killed during the battle, and back home he promises to take care of his friend’s wife and little son. But my, oh, my – the nasty Black Ops guys kidnap the poor woman with son. This is an attempt to make John Seeger accept a mission for them. He’s supposed to travel to South Africa where he’s going to help some dude; a gunrunner, escape from a prison just outside Cape Town.

Well, John Seeger has no other choice if he wants to see his friend’s wife and little son alive again. However, it turns out the dirty CIA agents also plan to rob a bank.

Does this sound confusing? That’s because it is kinda confusing. The story disappears among the numerous action scenes. And these action scenes are pretty boring. They’re rudimentary and a tad repetitive. And they never end. People fire hundreds or maybe even thousands of rounds, but the scenes never go over the top or at least entertain.

I’ve seen quite a few movies featuring Luke Goss lately, like “TEKKEN” and “Death Race 2”. He seems to have become some kind of poor man’s Jason Statham. Goss is a decent actor and works pretty okay. Roger Guenveur Smith one weird actor. His performance is über strange. I couldn’t decide if he really, really, really sucks as an actor, or if he acts badly on purpose since he knows this is a very uninteresting run-of-the-mill B-movie. His voice, phrasing and facial expressions are very odd, as are his lines.

There’s also a hot chick in the movie, some kind of mercenary who looks like Catherine Zeta Jones – but it’s of course not her. This character is played by Jaqueline Lord and she turns into Seeger’s love interest, when she doesn’t kill people.

And Steven Seagal himself? Well, his performance is also a tad strange. Quite often, we only see his face in close-ups, or Seagal standing alone in front of a neutral wall, saying his lines. It looks like Seagal was edited into these scenes – which he probably was. The other actors interact with a guy who wasn’t present on the set. A way of filming that got more and more common in the later Seagal movies.

“Mercenary for Justice” was shot in Cape Town, South Africa, and in Bulgaria. No Seagal movie is complete without material shot in Bulgaria or Romania! FauntLeRoy’s movie is better looking than most other direct-to-DVD-movies starring Steven Seagal – but it’s still a boring and uninvolved film. Despite the massive amounts of action.

The 2015 movie ”Absolution” was announced as a sequel to ”Mercenary for Justice,” but Seagal is playing some other character than John Seeger in that one. 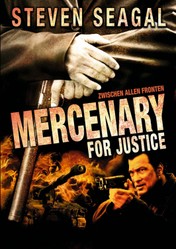