A review of the Italian horror classic, starring Pierre Brice, who was the title character in the German Winnestou Westerns.

Unlike most of the early, Italian gothic horror movies, "Mill of the Stone Women," which takes place in Amsterdam, is in color. It is also one of the best and most atmosheric entries in the gothic movie canon. A rather underrated film that deserves to be rediscovered. Directed by Giorgio Ferroni and starring Pierre Brice.

Before the Italian genre movie industry in the late 1960s started churning out elegant and blood-soaked gialli, and after that turned to ultra violent zombie and cannibal movies, they produced a long string of gothic horrors. Maria Bava’s “Black Sunday”, aka “Mask of Satan”, is of course the most well-known entry, one of the most productive directors was Antonio Margheriti (who often called himself Anthony M. Dawson), and the big star was Barbara Steele.

“Mill of the Stone Women” (“Il mulino delle donne di pietra”) is a French-Italian co-production based on a Dutch short story, and it was directed by Giorgio Ferroni. Ferroni’s career took off already in the 1930s, and he directed dozens of movies in several genres up until the mid-1970s: peplums (mythological muscle men epics), war movies, Westerns and of course horror. 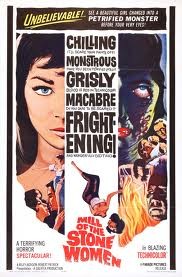 The star of “Mill of the Stone Women” is French actor Pierre Brice, who became a big star in continental Europe during the early ‘60s, when he played Winnetou. Winne...who? you ask. Winnetou. The Apache hero of the books of German author Karl May (1842-1912). Without ever leaving his home country, May wrote a huge amount of adventure novels taking place in America and Africa, and the most popular ones centered around Winnetou and his white friends like OId Shatterhand.

In the early ‘60s, German production companies Rialto and CCC made two competing series of movies based on May’s characters -- and thus became pioneers in the Euro Western field. These movies were German-Italian-Yugoslavian co-productions, shot in Yugoslavia, and Brice starred in both series, along with Americans in exile like Lex Barker and Stewart Granger. A certain Mario Girotti also appeared in some of the Winnetou movies -- Girotti later changed his name and became the immensely popular Terence Hill of Trinity fame. 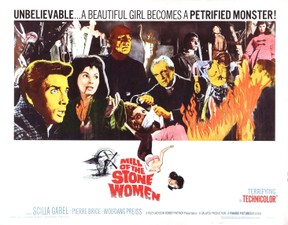 Anyway, in “Mill of the Stone Women”, Pierre Brice is Hans von Arnam, who arrives to the small Dutch town of Veeze. For some reason, Hans intends to gather information of the old wind mill of the title, and the eerie stone sculptures inside it. The owner and sculpture is a professor called Gregorius Wahl (played by Robert Boehme) and as soon as Hans enters the weird mill, he’s locked up in a study and witnesses a kind of creepy -- and I mean creepy -- carousel with very realistic looking sculptures of women moving along a track on the floor.

Now the mysterious professor appears and says that Hans only has six days to complete his studies of the old mill. During these six days, strange things happen. Young women disappear from the area, Hans falls in love with the professor’s beautiful daughter Elfie (Scilla Gabel), and he realizes the professor, assisted by a Dr. Bohlem (Wolfgang Preiss), carries out mysterious experiments... 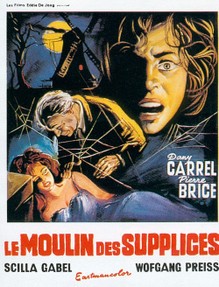 This is yet another variation of the old Horror of the Wax Museum theme, and it does of course not come as a surprise when it’s revealed that the sculptures are real, dead women. But among the many wax museum movies out there, the end scenes of Ferroni’s version are probably the most effective: the mill is set on fire, the carousel is started, and burning stone women with melting faces move slowly around to creepy music. This is exceptionally eerie and actually quite beautiful and poetic.

There’s quite a lot going on in “Mill of the Stone Women” and I must admit I got a tad confused every now and then, but it really doesn’t matter -- Giorgio Ferroni’s Technicolor movie is a stunning piece of gothic entertainment. The movie is very atmospheric, the color scheme is absolutely beautiful, and as a whole, this somewhat forgotten little movie is utmost enjoyable and deserves to be entitled a classic.