After starring in Mario Bava's Italian horror classic "Black Sunday," Barbara Steele became a star and appeared in a long string of Italian movies; most of them gothic horrors. "The Long Hair of Death" was directed by veteran Antonio Margheriti, a jack of all trades. This is however not one of Margheriti's -- or Steele's -- most memorable movies.

Problems falling asleep when you go to bed? Do you spend your nights sleepless, twisting and turning? And counting sheep doesn't help?

Relax! I've got the cure for you. Pop "The Long Hair of Death" into your DVD-player and you're guaranteed to fall asleep. This is a snooze fest if there ever was one.

But before I get to that little sucker, grab a chair, sit down, pour a cup of coffee and let me tell you a little about Antonio Margheriti. The late Mr. Margheriti (1930-2002) was better known as Anthony Dawson, sometimes even Anthony M. Dawson. He was a rather competent director and I often tend to say that I like him and his movies. That's probably because of the movies he made in the 1980s.

Like so many other Italian directors, Antonio Margheriti worked in most genres. Whenever there was a new trend, he jumped on the bandwagon. Peplum (Sword & sandal)? Check! Spaghetti Westerns? Check! Horror? Check! In the early 1970s, he was recruited to help Paul Morrissey outÂ directing the classics "Flesh for Frankenstein" and "Blood for Dracula". Margheriti is actually credited as the director on the Italian prints of the movies, but in reality, Margheriti was just some kind of supervisor, especially of the great Dracula flick, one of my favorite movies.

In the 1980s, Margheriti directed the infamous video nasty "Cannibal Apocalypse" starring John Saxon, that's the movie in which fan fave John Morghen ends up with a big, damn hole in his stomach. And then followed the movies which became my introduction to the works of Margheriti - a long string of war and action-adventure movies, often starring the late, great David Warbeck or Lewis Collins from the classic British cop show "The Professionals". These were either Vietnam dramas inspired by "Apocalypse Now", Rambo style actioners or adventures in theÂ Indiana Jones school. Some of the titles are "The Last Hunter", "Tiger Joe", "Codename: Wild Geese" and "Commando Leopard". Several of these were German-Italian co-productions, produced by legendary Swiss exploitation producer Erwin C. Dietrich.

...But let's go back to the early 1960s. After Mario Bava's "Black Sunday", Italian Gothic horror was hot, and British actress Barbara Steele had become the first Italian horror star. It goes without saying that Antonio Margheriti directed a handful of movies in this genre. Unfortunately, they're pretty damn boring

The original title of "The Long Hair of Death" from 1964 is "I lunghi capelli della morte", and for some reason, I had imagined this one as good. I don't know why. Maybe it was the odd title that made me curious? 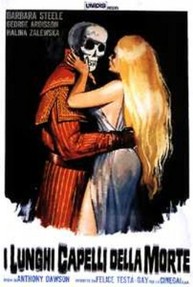 First of all: the print I watched was awful. The image quality was a tad blurred and too dark, and since this movie is in black & white, it got even darker. And the sound was just as bad, I had often problems hearing the dubbed, English dialog, therefore, I had problems following the story, I missed a lot of what was going on. But the story goes something like this:

In the 15th century, a lord accuses a woman of witchcraft and has her executed. However, the woman's daughter knows that the real reason for having the woman put to death, is that the lord desired her sexually. The lord doesn't like this, so, hell, let's kill the daughter too -- which he does.

It turns out the executed woman -- the one who was accused of witchcraft -- has a younger daughter as well, and she marries the lord's son. OK, so when does the horror part begin? About now, because suddenly the older daughter comes back from beyond the grave to avenge her and her mother's deaths. People die. The movie ends.

Not only was the print I watched bad, "The Long Hair of Death" is very slow-paced and very dusty. I had problems concentrating on it. My thoughts were drifting away.

Barbara Steele as the mother and younger daughter is of course quite fetching, she had a certain, odd screen presence and her big eyes are intense. The older daughter was played by Polish actress Halina Zalewska -- her character dies in a fire in the movie, and tragically, Zalewska died in a fire in real life a few years later.

"The Long Hair of Death" isn't all bad. It does have its moments.

Most of it takes place in a castle and there are of course several scenes that reek with Gothic atmosphere. Yes, we get scenes of women dressed in nightgowns walking through dark hallways, carrying a candelabra.

But as a whole, this movie really isn't worth 100 minutes of your life. Or my life for that matter. Too late for me. Damn. 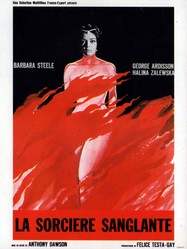